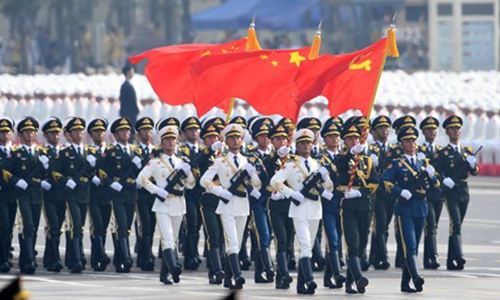 A formation of Guard of Honor takes part in a grand military parade celebrating the 70th anniversary of the founding of the People's Republic of China in Beijing, capital of China, October 1, 2019. (Photo: Xinhua)

Although the 6.6 percent growth is the lowest defense budget growth in recent years, it is enough to maintain China's core strategic interests.

China's defense budget growth this year is in accordance with our economic situation. In the context of the raging COVID-19 pandemic, the global economic outlook is not optimistic and thus China's military spending will not increase significantly. However, there must still be growth because the Chinese military needs financial guarantees to ensure military modernization. Such growth in military spending is completely reasonable and it will not cause difficulties for our national expenses.

China's military spending is much less than that of the US, but China's defense budget is utilized in a much more efficient way. In the US, the Pentagon needs to purchase weapons from major arms dealers. Arms dealers tend to consider their own profits, and sometimes the profit can be very high. The cost of labor in the industry is also high.

China's military industry is closely connected with the country. China provides military enterprises with enough room for profits, but our ultimate goal is not to make profits, but to better serve the modernization of the Chinese military. Thus, China's military spending is much more efficient than that of the US.

The US is also increasing its defense budget, but it has not helped the country rein in the COVID-19 epidemic. War, instead of protecting the safety of American people, is the main goal of the US military. While in China, the Chinese military aims at protecting Chinese people and safeguarding their lives. Whether in response to natural disasters or large epidemic outbreaks, Chinese troops are always at the forefront. Therefore, China's increased defense budget can give our people a greater sense of security.

China's national defense construction and military spending are completely open and transparent, and the so-called invisible defense spending is merely a smear. The US spends a lot on many secret military operations and intelligence activities overseas. The US believes China is doing the same and has an "invisible" defense budget, imposing its own twisted mentality on China and the Chinese military.

The defense budget will be mainly spent in two fields - in preparation for both conventional warfare and non-traditional security threats, such as anti-piracy and anti-terrorism operations, and humanitarian assistance, disaster relief, including epidemic prevention and control such as during the COVID-19 crisis.

During the novel coronavirus epidemic, the Chinese People's Liberation Army (PLA) participated in the battle to rein in the virus. The crisis is also a reminder to the PLA, that it is time to pay more efforts in boosting its capabilities of coping with non-traditional security threats, including the outbreak of highly infectious diseases and even biological warfare. It is a challenge confronting the PLA which needs more investments to upgrade equipment, improve training, and raise the pay for military personnel.

China is now confronting several challenges in its peripheral area, including the Taiwan question, South China Sea issue and border disputes with India. It is also fighting against the three evil forces, namely terrorism, separatism and extremism. All of those require increased spending on national defense and security.

The PLA is carrying out a new round of military reforms, which aim at building a more professional, modern and informationized fighting force. China is expected to realize its national defense modernization by 2035, boosting its army's combat capabilities and strengthening its ability to safeguard the country's interests overseas. To reach the goal, China needs to promote informatization not only on its armed forces, equipment, but also the entire command and administrative system of the army.

No matter how solid the country's economy develops, the achievement will be fragile without a strong military power to protect China's interests both at home and abroad.

Some foreign forces will without doubt again hype the so-called Chinese military threat because of the just released defense budget growth, while turning a blind eye to the substantial increase in US military expenditures last year. No matter how noisy those voices are, China should stick to its own military development route.