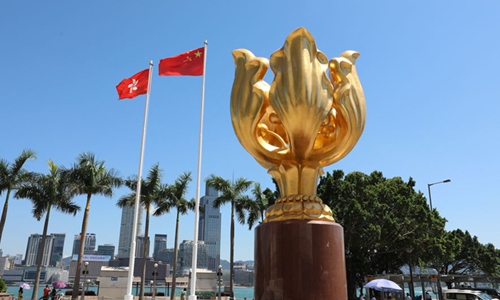 After China's National People's Congress (NPC), the country's top legislature, announced Thursday evening that it will deliberate a draft decision allowing its standing committee to formulate relevant laws to establish and improve the legal system and enforcement mechanisms for the Hong Kong Special Administrative Region to safeguard national security, Washington has nearly hit the ceiling.

President Donald Trump said the US will "address that issue very strongly" if China does so. The US State Department even hinted it might reconsider Hong Kong's special status in US law. Some heavyweights in US Congress, including House Speaker Nancy Pelosi, also made tough rhetoric over the case. But being hopping mad is proof of their incapability to do anything about it.

The US' biggest card is canceling Hong Kong's separate customs territory status. This would be a blow to Hong Kong's economy, making a dent in the city's status as an international financial center. But, at the same time, Hong Kong is a rare contributor to tens of billions of US trade surplus each year. A large number of US companies are doing business there, where 85,000 US citizens work and live. Throwing a punch at Hong Kong means hitting the US itself.

Hong Kong has been a link between China and the West. Yet, with the deepening of China's reform and opening-up, this function of Hong Kong has been largely decentralized to China's coastal areas. If the US cuts its bond with China on Hong Kong, the damage to the Chinese mainland's economy will be not even close to the blow the US could make 20 years ago.

More importantly, when China announced the plan, it meant Beijing had already evaluated how Washington would respond, and has been prepared for possible challenges. The possibility of China retreating under US pressure is zero.

The US does have tangible options in its toolkit to exert pressure on China. But after the two-year long trade war, China has encountered all possible US punitive tools and has built its resilience. China's latest announcement showed its strategic contempt for Washington's tactics of pressuring Beijing. As long as the US dares to play its cards, China will play the game without hesitation.

The US does not represent the West. Many other countries have their interests in Hong Kong. As the US willfully imposes sanctions across the world, it is jeopardizing its own interests. The US has been hit hard by the novel coronavirus, and it will be interesting to see the country try to throw its weight around like in the early stage of the trade war against China.

Hong Kong belongs to China, not the US. The latter has only two choices when it comes to the city: be a friendly cooperator, or stay away. China will never offer the US a third option.