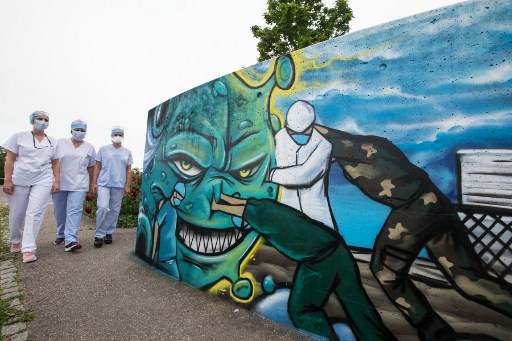 Medical staff members walk past a mural depicting a nurse, a doctor and a soldier fighting against the COVID-19 pandemic, painted by street artist Slimjoe in support of health workers, outside the Emilie Muller Hospital in Mulhouse, eastern France, on May 22, 2020. (Photo: AFP)

The total number of deaths from the COVID-19 pandemic worldwide has increased to 338,142 with the global confirmed cases reaching 5,210,065 as of 10:30 am BJT on Saturday, according to a tally by Johns Hopkins University (JHU). 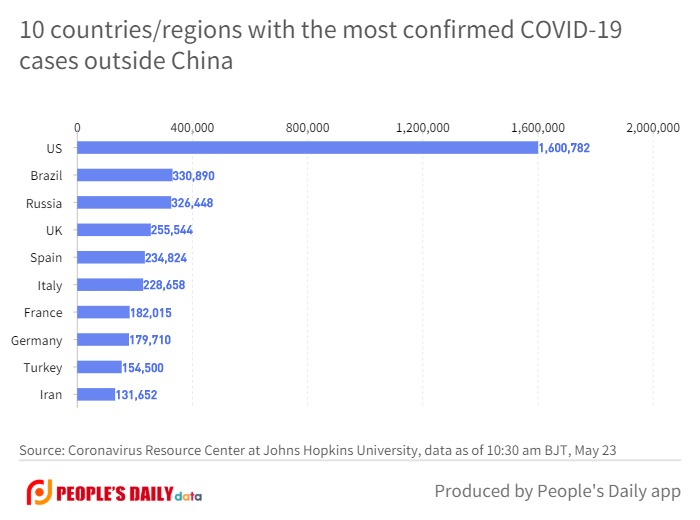 Chinese health authority said on Saturday it received no reports of new confirmed COVID-19 cases on the Chinese mainland on Friday.

The United States recorded a further 1,260 deaths from COVID-19 on Friday, bringing its total to 95,921 since the global pandemic began, according to a tally kept by JHU. The country has also officially logged more than 1.6 million cases of the virus, far more than any other nation, the tracker kept by the Baltimore-based university showed at 8:30 pm (0030 GMT Saturday).

Brazil this week became the latest flashpoint as its death toll surged past 21,000 -- and with 330,890 cases the Latin American giant is now the second most affected country behind the United States.

Russia has confirmed 8,894 new COVID-19 cases in the last 24 hours, raising its total number of infections to 326,448, its coronavirus response center said in a statement Friday.

Britain is to introduce 14 days quarantine for international arrivals, Northern Ireland secretary Brandon Lewis confirmed on Friday and said ministers would give further details later. The total coronavirus-related death toll in the country rose to 36,475, according to JHU.

Within the 24-hour period from midnight Wednesday to midnight Thursday, 56 people lost their lives to COVID-19 in Spain, more than the 48 confirmed in the previous 24-hour period, taking the country's death toll from the disease to 28,628.

A further 130 COVID-19 patients had died in the past 24 hours in Italy, bringing the country's death toll to 32,616, according to the latest official tally on Friday.

France on Thursday saw the death toll from the coronavirus increasing to 28,218 with 86 new deaths in the last 24 hours, lower than Wednesday's 110, according to figures released by the country's Health Ministry.

The Iranian health ministry on Friday reported 51 new deaths of the novel coronavirus, bringing the total number of deaths in the country to 7,300 since the outbreak of the disease in late February, state TV reported.