Europeans soak up the sun but virus travel rules a mishmash

Europeans and Americans soaked up the sun where they could, taking advantage of the first holiday weekend since coronavirus restrictions were eased, while European governments grappled with how and when to safely let in foreign travelers to salvage the vital summer tourist season. 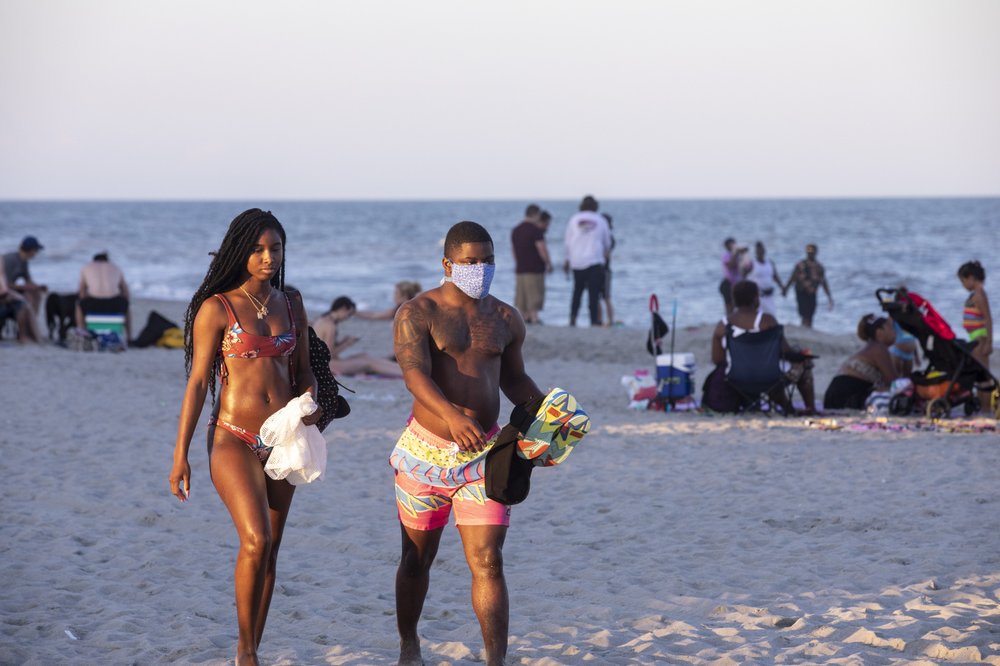 Sunbathers catch the last rays of evening light, amid the coronavirus pandemic, Saturday, May 23, 2020, in Myrtle Beach, S.C. (Photo: AP)

Yet even as social distancing rules spread families and friends out Sunday across beaches and parks, the virus remained a constant threat. The United States was on track to surpass 100,000 coronavirus deaths in the next few days, while Europe has seen over 169,000 dead, according to a tally by Johns Hopkins University.

The New York Times marked the horror by devoting Sunday's entire front page to a long list of names of those who have died in the pandemic in the U.S. under a headline that called it "An Incalculable Loss."

President Donald Trump played golf at one of his courses during the Memorial Day weekend as he urged U.S. states to reopen their coronavirus lockdowns. However, many Americans were cautious as the number of confirmed cases passed 1.6 million nationwide.

Across Europe, a mishmash of travel restrictions appears to be on the horizon, often depending on where travelers live and what passports they carry. Germany, France and other European countries aim to open their borders for European travel in mid-June but it isn't clear when intercontinental travel will resume.

Spain, one of the worst-hit countries in the pandemic and also one of the world's top destinations for international travelers, says it won't reopen for foreign tourists until July. To boost the economy, the country's leader has encouraged Spaniards to "start planning their vacations" for late June inside Spain.

"Come July, we will allow the arrival of foreign tourists to Spain under safe conditions," Prime Minister Pedro Sánchez said. "We will guarantee that tourists are not at risk and that they don't represent a risk (to Spain)."

For now, travel between Spain's provinces isn't allowed and many other restrictions remain — although on Monday, residents in worst-hit Madrid and Barcelona will be able to join the rest of the country in dining outdoors at bars and restaurants, which can offer only 50% of their usual tables.

Also Monday, local sunbathers and swimmers will be permitted in some of Spain's coastal provinces. The number of beach-goers will be limited and umbrellas must be at least 4 meters (13 feet) apart.

In Germany, domestic tourists will be allowed to return Monday to Mecklenburg-Western Pomerania state in the northeast — home to the country's Baltic Sea coast — and to hotels in Berlin, the popular capital.

But tourism campaigns will require a new approach.

"We don't think people want closely packed big-city bustle at the moment," Burkhard Kieker, the chief of visitBerlin, told RBB Inforadio. His agency has launched a campaign showing "how much green space and how much water there is" in Berlin.

In Paris, where all city parks remain closed, locals soaked up the sun along the embankments of the Seine River and lounged on ledges outside the Tuileries Gardens. In some spots, people sat safely spaced apart. Elsewhere, groups of maskless teens crowded together, shrugging off social distancing rules.

Beginning Monday, France is relaxing its border restrictions, allowing in migrant workers and family visitors from other European countries. But is calling for a voluntary 14-day quarantine for people arriving from Britain and Spain, because those countries imposed a similar requirement on the French.

Italy, which plans to open regional and international borders on June 3 in a bid to boost tourism, is only now allowing locals back to beaches in their own regions — with restrictions.

In the northwestern Liguria region, people were allowed a dip in the sea and a walk along the shore, but no sunbathing. In Savona, a dozen people were fined for violating sunbathing bans. Rimini, on Italy's east coast, attracted beach-goers beginning at dawn, and many sat in widely spaced groups. Still, authorities had to work at enforcing distancing on a popular beach in Palermo.

''We cannot forget that the virus exists and is circulating," deputy health minister Pierpaolo Sileri told Sky TG24. "Even if the numbers of new cases are low, we must respect the rules."

For the first time in months, well-spaced faithful gathered in the Vatican's St. Peter's Square for the traditional Sunday papal blessing. Some 2,000 Muslims gathered for for Eid al-Fitr prayers at a sports complex in the Paris suburb of Levallois-Perret, carefully spaced 1 meter apart and wearing masks.

Beachside communities along England's coast urged Londoners and others to stay away after rules were eased to allow people to drive any distance for exercise or recreation. The southern coastal city of Brighton put it: "Wish you were here — but not just yet." Wales kept up its "Later" tourism campaign, reminding people that its hotels, restaurants and tourist sites were still closed.

In the U.S., restrictions eased state-by-state although hundreds of people are still dying from COVID-19 every day. New Orleans stirred back to life as some of its famed restaurants and businesses opened for the first time in over two months. In California, where many businesses and recreational activities are reopening, officials in Los Angeles County said they would maintain tight restrictions until July 4.

New York state reported its lowest number of daily coronavirus deaths — 84 — in many weeks in what Gov. Andrew Cuomo described as a critical benchmark.

Officials in China, where COVID-19 was first detected late last year, hit back at criticism of the country. Foreign Minister Wang Yi said any lawsuits brought against China over the the virus have "zero factual basis in law or international precedence."

Wang told reporters Sunday that China was a victim of the pandemic alongside other countries.

"To our regret, in addition to the raging of the new coronavirus, a political virus is also spreading in the U.S., which is to take every chance to attack and discredit China, "Wang said. "Some U.S. politicians, heedless of basic facts, have fabricated too many lies and plotted too many conspiracies."

The director of the Wuhan Institute of Virology said claims that the pandemic originated there are a "pure fabrication."

"We didn't even know about the existence of the virus, so how could it be leaked from our lab when we didn't have it?" Wang Yanyi was quoted as saying by state media.

Trump and Secretary of State Mike Pompeo have repeatedly said they suspect the virus was somehow released from the laboratory in Wuhan. Most scientists say the pathogen was passed from bats to humans via an intermediary species likely sold at a market in Wuhan late last year.

Worldwide, more than 5.3 million people have been infected and 342,000 have died, according to the Johns Hopkins tally that experts say under-counts the true toll of the pandemic for a number of reasons.