WORLD In Mexican border cities, many fear virus is coming from US

In Mexican border cities, many fear virus is coming from US 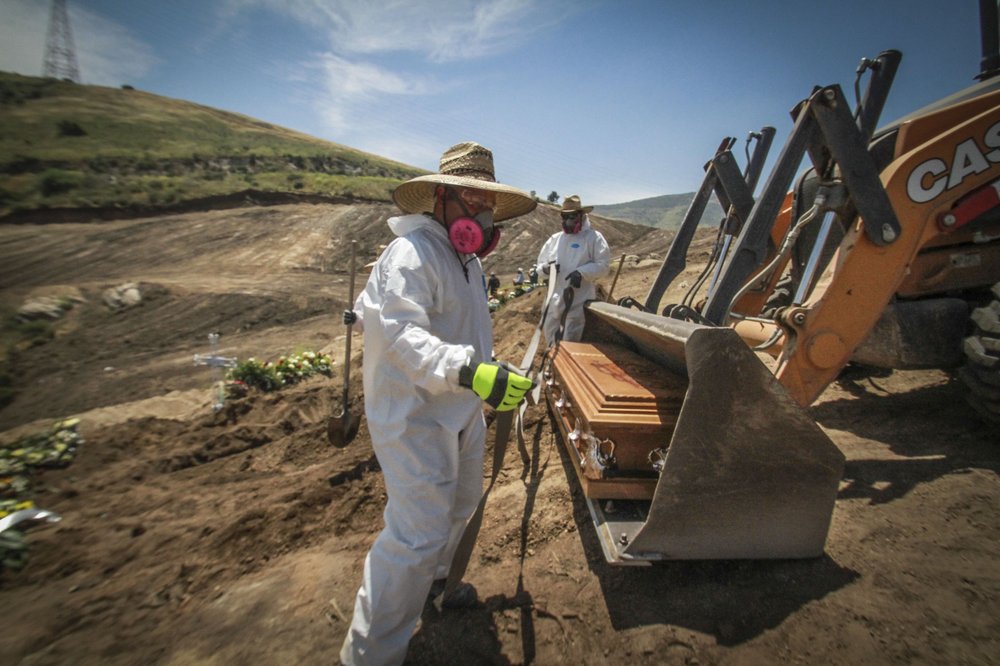 Workers in full protective gear as a precaution against the new coronavirus, unload a coffin that contains the remains of a person who died from the new coronavirus, in an area of the municipal cemetery set apart for victims of COVID-19, in Tijuana, Mexico. (Photo: AP)

Adrián Alonso Gama lived life on both sides of the border until he got the coronavirus.

On weekends the 37-year-old truck driver would stay at his parents’ home in Tijuana. Thanks to his US green card, he lived in his own place in San Diego during the week, delivering beer and auto parts around the American southwest.

Last week, Gama started feeling sick and returned to Mexico to be close to family. He was diagnosed with COVID-19, becoming one of the more than 1,700 confirmed coronavirus patients who make Tijuana second only to Mexico City in infections, despite the border city’s relatively small population.

Citing a threat of the coronavirus from Mexico, the Trump administration has banned hundreds of thousands of people from crossing the southern border with emergency measures that prohibit nonessential traffic and reject asylum seekers without a hearing. At least one American border region is experiencing a spike in hospitalizations that some believe is driven by American citizens who live in Mexico coming to the US for care.

But in Tijuana and other Mexican border cities, many doctors, health officials and ordinary citizens worry about the disease coming in the other direction.

San Diego — with roughly the same population as Tijuana — has triple the number of confirmed cases of COVID-19, at more than 6,000. The state of California has about 10 times as many people as the Mexican state of Baja California to the south — but reported more than 20 times the number of cases. Mexico has a notoriously low testing rate, but that alone seems an insufficient explanation.

Tijuana saw its cases begin to rise significantly in late March soon after California shuttered many businesses and ordered people to stay home, said Dr. Remedios Lozada, who is in charge of the Tijuana health district. It appears that much of the surge came from dual nationals and legal residents like Gama, who wanted to be closer to family or live more cheaply in Tijuana during the shutdown.

“There were a lot of people who emigrated here to Mexico,” Lozada said. “That was when we began facing a higher number of cases.”

Tijuana’s hospitals became swamped with suspected COVID-19 patients. Desperate relatives demanded information about their loved ones outside medical facilities. Nurses and doctors protested that they didn’t have the necessary protective equipment as the virus swept through their ranks.

Baja California Gov. Jaime Bonilla said in mid-April that the public health system’s doctors in the state were “dropping like flies” because they lacked protective gear.

Farther down the border in Nogales, Sonora, residents temporarily blocked the crossing from Arizona with their vehicles in March because they said the Mexican government was doing nothing to medically screen people coming from the US, and they feared the pandemic would overwhelm Mexico’s health system.

Meanwhile, California officials and hospital CEOs have expressed concern about people crossing the border to get treatment on the US side. Last month, San Diego County Supervisor Kristin Gaspar sent a letter to Vice President Mike Pence asking the White House to send aid to help Mexico treat patients, citing increasing concern about the virus’s spread in northern Mexico. She called for a temporary hospital to be set up at the border to treat those arriving in Mexican ambulances, so they are no longer transferred to US ambulances and hospitals.

Mexican Consul Carlos González Gutiérrez said in response that there is no evidence of Mexican nationals crossing the border in large numbers to seek health care; those who do are either US citizens living in Mexico or dual citizens.

This month, the Imperial Valley, a farming region in California on the border with Mexico, is experiencing a spike in hospitalizations that some believe is driven by the same phenomenon González referenced.

In Tijuana, it remains unclear where the first coronavirus cases originated, though state officials have said the first confirmed case was a man who had traveled to the US. While that’s one possibility, the city also sees many international visitors and has numerous links with Mexico City, which is by far the hardest-hit place in the country. Gama used a mask and gloves on both sides of the border and doesn’t know where he got infected.

“There (in the US) I didn’t really know where to run to, and my whole family is in Tijuana,” he said. “They didn’t check me or ask me anything” when he crossed into Mexico, Gama said. Days later, he tested positive.

He is now recovering in his parents’ home and says so far no one else in his family feels ill.

For most people, the coronavirus causes mild or moderate symptoms. For some, especially older adults and people with existing health problems, it can cause more severe illness and lead to death.

The Trump administration this week extended its border restrictions for a month and, on paper, Mexico has imposed the same limits on nonessential traffic from the US. In reality, Mexican officials generally check only pedestrians for symptoms. Meanwhile, most commercial traffic, which is considered essential, and travelers like Gama, with the right to live and work in both countries, continue to cross in large numbers in both directions.

That has officials worried that Tijuana could see a resurgence in the coming weeks, even though for now the city appears to have passed the peak. The city’s intensive-care units were only about 60% occupied this week, and it has set up neighborhood clinics and new wards for patients with less serious symptoms.

José María Ramos, a professor and researcher at the College of the Northern Border in Tijuana, said Trump’s priority appeared to be limiting migration rather than protecting public health. He criticized Mexico’s government for not pushing back more.

“We’re in a national emergency, and health has to be part of the present and immediate future,” Ramos said.

For some touched by the virus, temporarily sealing the border would make sense.

“The people come and go and carry the microbe from the United States or from Tijuana,” said Miguel Angel Jiménez, a 57-year-old diabetic who contracted COVID-19 in April and is just beginning to recover. “So we’re never going to end this situation.”