Moroccans trapped in Spain for 2 months head home at last

It's a reverse migrant crisis: Moroccan workers trapped in Spain are begging their own government to let them come back home. 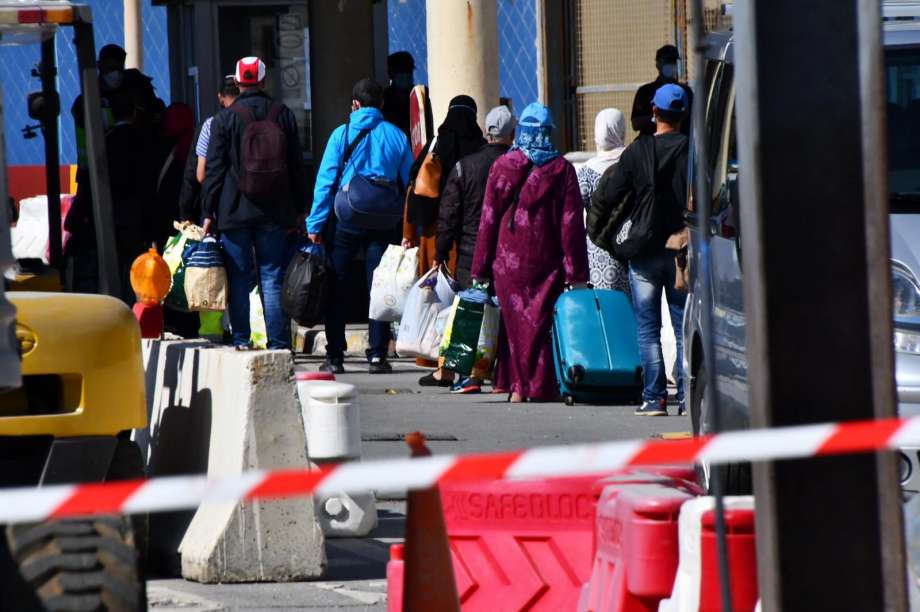 In this Friday, May 22, 2020, photo, Moroccan citizens wait for repatriation after being stranded in Spain due to the coronavirus pandemic in the Spanish enclave of Ceuta, Spain. (Photo: AP)

Construction worker Mohammed Benali is among hundreds of Moroccans who headed to their jobs in Spain's North African enclave of Ceuta one day in March thinking they'd be home for dinner — but instead they found themselves trapped for more than two months by Morocco's abrupt and unusually strict border closures to keep out the virus.

They have slept in a parking lot, gyms, mosques, churches or with generous employers. One stranded woman gave birth. A few were so desperate they jumped into the Mediterranean Sea to swim home.

At last, Morocco is starting to allow them back.

Benali, who reached Moroccan soil on Friday, was so shaken by the experience that he told The Associated Press: "I'll never return to Ceuta again." Others are still stuck, their return dates uncertain.

While countries around the world closed their borders to foreigners to keep out the virus, Morocco went even farther, barring its own citizens from coming home in hopes of limiting the risk of coronavirus arriving on Moroccan soil and overwhelming its underprepared hospitals.

That left more than 21,000 Moroccans stranded around the world. They include legal workers in the Spanish enclaves of Ceuta and Melilla who live in Morocco and work in Spain in construction, commerce, or as domestic employees, as well as undocumented migrants whose jobs have dried up amid economic shutdowns and Moroccan tourists whose visas have now expired.

When she was nine months pregnant, Houria Douas went to Ceuta to visit her brother and buy baby clothes but ended up getting stuck. She gave birth to her firstborn in a Ceuta hospital because Morocco wouldn't allow her to come home.

Hospital workers "would look at me with pity and tell me it's in the hands of the Moroccan government," she said.

During childbirth, Douas, who does not speak Spanish, struggled to breathe through her mask and to understand the doctor and nurses. She was told that her newborn boy couldn't be vaccinated because Douas does not have Spanish residency papers.

After weeks of waiting, good news came Friday: Benali, Douas and her baby were listed along with about 200 people eligible to return to Morocco.

Spanish authorities said 300 people would be allowed back in Morocco from Ceuta. But the stranded Moroccans say hundreds of others still remain, staying in sports complexes and a mosque. It's unclear when they will leave.

The lucky ones waited for eight hours Friday in a parking lot in Ceuta for buses to take them home. When they crossed the border into the nearby Moroccan city of Fnideq, they were separated into groups and taken to separate hotels where they were tested for the virus. Spanish authorities said they would be isolated in the hotels for two weeks.

"The first thing I'll do after the quarantine is get my newborn his vaccination shots," Douas said.

Aberrahim Ennaw, a Moroccan who is still stuck in Ceuta, and says anxiety among the remaining Moroccans is intense.

"We were not given any information on repatriation," he said. "The Spanish and Moroccan authorities do not communicate with us at all."

Moroccan Prime Minister Saad Eddine El Othman announced last week that repatriation plans are "finally ready," but details are only slowly trickling down to those trapped in Ceuta. Moroccan authorities cited the heavy virus toll in Europe, which has now seen more than 169,000 coronavirus deaths, as a reason for the tough border closure. They said they would only start allowing people when it is safe for them and Morocco.

Some Ceuta residents opened up their houses, shops, and garages for the stranded Moroccans. Churches in southern Spain also housed those who couldn't go home.

The Moroccans appealed to their king for help, and held small protests earlier this month in Spain and France.

At least a dozen Moroccans swam in April in the chilly Mediterranean from Ceuta around the border checkpoint to the nearby Moroccan town of Fnideq, according to the president of the Northern Observatory of Human Rights, Mohammed Ben Aissa.

As the virus raged across Spain, France and Italy, Ben Aissa said smuggling networks even offered to bring undocumented Moroccan migrants back to their relatives in Morocco — for a fee. But he said no families took smugglers up on the offer. Authorities in Morocco and Spain could not confirm the report.

Two Moroccans trapped in Spain's North African enclave of Melilla even climbed a border fence to go back home, according to the Moroccan Human Rights Association in the Moroccan town of Nador. This is the same high border fence that is regularly stormed in the opposite direction by scores of African migrants trying to slip into Spain to seek better lives in Europe.