Trump hits the golf course as US opens summer season 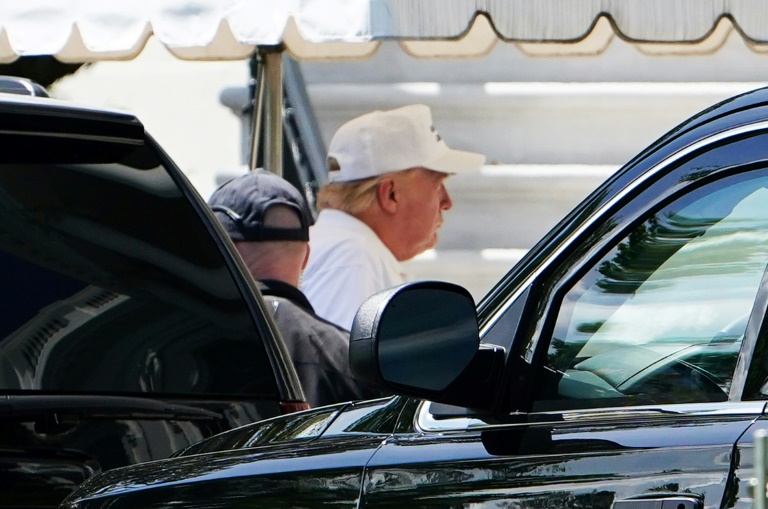 US President Donald Trump returns to the White House after golfing at the Trump National club in Sterling, Virginia on May 23, 2020. (Photo: AFP)

US President Donald Trump kicked off the American summer season on Saturday with his first golf outing in two months, underlining his push for a return to normal life in the United States.

As lockdowns ease across the country and the US leader ramps up his travels, Trump also confirmed he would attend a space launch in Florida next week.

As the US marked Memorial Day weekend - the country's unofficial start of summer – Trump took a 35-minute drive from the White House to the Trump National Club in Sterling, Virginia. Neither Trump nor his three golf partners wore masks, though he rode alone in his golf cart. Trump's last golf outing was on March 8 when he visited the Trump International Golf Club in West Palm Beach, Florida.

White House coronavirus task force official Deborah Birx on Friday said that sports such as golf could be played safely if social distancing was in place and players didn't touch flags. But she also warned that the Washington area continued to have high positive test rates.

Trump, keen to find a way out of the coronavirus crisis and facing an uphill re-election battle, has ramped up pressure on state and local governments to ease lockdown measures.

On Friday, he demanded state governors classify churches, synagogues and mosques as "essential services" on the same level as food and drug stores, and immediately allow them to hold services.

The White House on Saturday confirmed Trump would also attend the May 27 launch in Florida of two astronauts on a SpaceX mission – the first crewed space flight from US soil in nine years.

The mission is seen as a crucial step towards ending American dependence on Russian rockets.

American astronauts have been flying to the ISS, which currently houses two Russians and one American, on Russian rockets since the US space shuttle program was shelved in 2011. A successful SpaceX mission would mean the United States had achieved its goal of no longer having to buy seats on Russian Soyuz rockets.

However, the Wednesday launch plan could be hit by bad weather, with a 60-percent chance of a postponement, according to official forecasts.