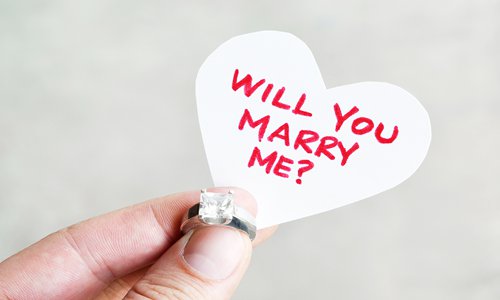 A couple gets married at an outdoor venue, but marriage is no longer a necessity for some Chinese. (Photo: VCG)

Tan Jianfeng, a member of the 13th National Committee of the Chinese People's Political Consultative Conference (CPPCC), made the proposal to address the problem of a large number of singles in the country.

Referring to the citizen ID card information system of the Ministry of Public Security, the Ministry of Civil Affairs and relevant departments can jointly build a national marriage and love registration and information query platform, suggested Tan, who is also the head of the Shanghai Information Security Trade Association.

The platform can be opened to certain citizens and enterprises or institutions in accordance with the law, allowing them to check citizens' marital status, Tan said.

Cases of fake or bigamous marriages have been reported in recent years, as there is no official channel to verify people's marital status. The problem has also been in a thorn in the side of the 18,000 matchmaking agencies in the country.

After the proposal was posted online, many Chinese netizens hailed it as a timely piece of help to them and hoped the country would put it on the agenda.

Offering dating services was written into China's Middle- and Long-term Youth Development Plan (2016-25), and unveiled in 2017, setting a general goal of establishing a "youth development policy system and work mechanism" by 2020 and improving the system by 2025.

The plan requires official organizations such as the All-China Women's Federation and the Communist Youth League to get involved in dating services for young Chinese.