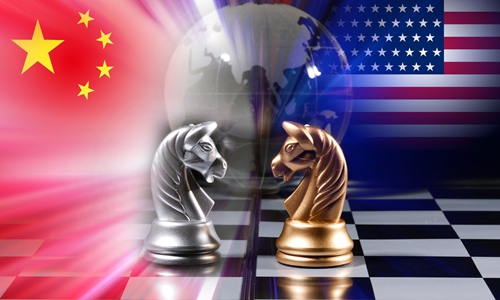 It is beyond anyone's expectation that China-US relations have become what they are today. China is being squeezed by the US-the world's most developed nation, and some Western countries have also been mobilized in varying degrees by Washington to lay siege to China. This brings a very bad feeling to Chinese society. Some Chinese intellectuals may wonder if China is to blame for the subversive change in the attitude of the US toward China. Do we in China need to make major adjustments to ease the China-US relationship?

It must be said that the continuous deterioration of China-US relations is a process of interactions between these two great powers. Both sides say the other country is the reason for the worsening of their relations. However, looking at China-US relations objectively without subjective emotions, we can list the following basic facts.

First, China is a rising developing country. So far it has not formed the strength that can pose a substantial challenge to the US, nor does China have the will to do so.

Second, the US has strategic doubts about China and China also has various expressions of its own visions. But the core of China's foreign relations is development. China's performance in what can be described as "overseas military expansion" is arguably negligible. China has been active only in areas where it has territorial disputes with its neighbors, and has generally been restrained, as evidenced by the fact that it has not had a military conflict with its neighbors in more than 30 years.

Third, China is expanding its influence through economic activities, which is a very mutually beneficial process, and it is doing so under the US-led multilateral trading system. China has not forcibly changed the rules of trade but has accumulated a trade surplus under the current rules and with the hard work of its people.

Fourth, China's political system differs from that of the US and the West, leading to frictions between values and ideologies. But China is generally not a country that exports ideology to the outside world, and there is no attempt to subvert the Western system. In the ideological frictions between the two sides, the West is undoubtedly the aggressive, offensive side and China is on the defensive side.

Fifth, there has always been a willingness on the part of the American elites to shape China. Their anger at China's insistence on its own political path in recent years is mixed with concerns that China's growing success could undermine Western confidence. But once again, it is not China's fault. After all, China has the right to go its own way without interfering in other countries' ways of development.

Sixth, when the Trump administration launched a trade war with China, it was indeed bullying. The "America First" doctrine has caused widespread disgust around the world. China is not the only victim. Since the outbreak of the COVID-19, Washington's dumping of the blame on China has been nothing short of campaign malpractice on the part of the White House and the Republican Party for election purposes. It's a classic form of international hooliganism.

The Trump administration is rife with radical, megalomaniac Cold War thinking. They are pushing China strategically and there is virtually no place for China to make a retreat.

The reality, however, is paper-thin. The US has defined China as a major strategic competitor. The price tag for ending its strategic crackdown on China is simply too high for China to accept and bear. In fact, what the US wants is China stopping growing and ensures that China adopts an attitude similar to that of Japan toward the US to completely eliminate US strategic concerns about China's rise.

So the relationship is strained between China and the US. After China grew up, the pattern of interests in China-US relations changed. In the 1980s, China was a force that the US could use to fight against the Soviet Union. Later, as a developing country, China could provide cheap labor services to the US. The new keyword for the US to feel about China today is competition. The US attitude toward China has completely changed, and policy adjustments are inevitable.

In view of this, I think the most important thing for Chinese people to do is not to dwell on the past. The landscape of China-US relations has changed, and we need to grasp the new scenario with new wisdom and determination.

The strategic competition between China and the US will be a long process that will test China's internal unity. To improve the cohesion of Chinese society, all kinds of elites, including the intellectual elite, need to participate and make their contributions. At this moment, the elites should not be afraid of the US. Instead, they should have the courage to stand on the front line of a complex competition with the US and put in the first place the interests of the country and the interests of the Chinese nation.

We must dispel the fears of some people that Chinese society may become more conservative as a result of the growing rivalry between China and the US. While strengthening cohesion, we should create more conditions conducive to increasing the vitality of our society. This is one of the key directions to improve social confidence, and it is especially important to unite the intellectuals.