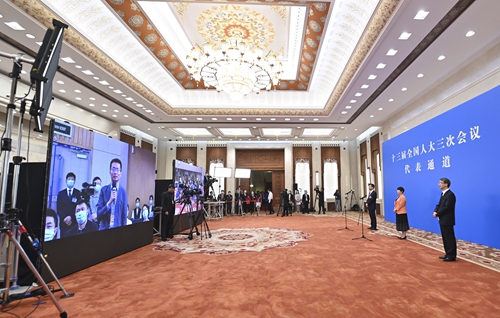 I am Xu Ping, an NPC deputy, said a young woman, introducing herself in a video on Douyin. "I have a special role as a special correspondent for Sichuan Daily." Born in 1995, Xu is the youngest NPC deputy from Southwest China's Sichuan Province.

Because of the novel coronavirus epidemic, the normally two-week long two sessions of 2020 has been condensed to a week this year, and only a limited number of reporters are allowed to enter the venue.

Many deputies and delegates of the 2020 two sessions have brought equipment such as selfie sticks to share their deliberative progress on Chinese social media platforms like Douyin. The NPC deputy group from Central China's Hubei Province even gave each deputy a selfie stick with a spotlight on it for better video quality.

"Many reporters cannot come to Beijing to report on the two sessions this year, while many young people are showing increasing interest in national affairs," NPC deputy Xu Ping told the Global Times.

On the evening before she left for Beijing, Xu shared a video on Douyin, one of the most popular short video platform, about what she was bringing to the annual parliamentary meeting. In her video, she showed her red-colored credentials, water bottle, notebook, a file that contains her speech, suggestions to propose at the meeting and two bags of face masks.

She also brought a selfie stick as she plans to make short videos to deliver major information from the perspective of the youth.

"I want to use the ways familiar to the younger generation to show the dynamics of the two sessions with my lens," said Xu.

On Friday, she held a selfie stick and walked through the interviewing area before the opening of the third session of the 13th National People's Congress.

"This is my third time standing in front of the Great Hall of the People, and I still feel so excited," Xu said proudly in the video posted that day. "I've been working as a NPC deputy for more than 1,000 days, and I still love the job like before," she remarked gleefully.

Her videos showed everyone wore face masks and the absence of groups' media reporters who used to carry big cameras and long lenses in front of the Great Hall of the People.

She introduced that "the government work report this year reflects the real situation, highlights people's well-being, and resolves problems of public concern, which won a robust round of applause in the hall."

In one video, Xu introduced the dining room for NPC deputies. Before entering the canteen, all the deputies must have their body temperature taken. "This year, the dining tables are different as every round dining table has been installed with transparent shields to stop transmission of droplets and insulate sound," Xu said in the video.

"Each deputy was provided with a plastic bag next to their plates to put on face masks when they are eating food," she said. At the end of the video, Xu expressed her gratitude to the workers who made such a meticulous preparation enabling the deputies to attend the annual legislation conference.

The short videos Xu shot were edited and shared with the public via the official account of the Standing Committee of Sichuan Provincial People's Congress and some local media.

With lively background music and funny memes added to the young deputy's content, each video Xu shot has received hundreds or thousands of likes on Douyin. Netizens praised her videos as an innovative and fresh way to observe the two sessions.

Before Cheng Mengxing would visit villages and enterprises, and report their opinions and suggestions to the relevant departments. Because of the epidemic, she had to choose soliciting opinions via online questionnaires, phone call and video chat.

"Online chatting created a more relaxed and free environment for them to talk and share opinions, which is also more accepted by young people," she said.

Cheng Ju is the Party secretary of Dashi village of Hubei's Xianning city where she is trying to revitalize rural economy via livestreaming.

"We are young and frequently using the internet, and I hope the young people's vigor and passion could bring something better to the development of rural areas," said Cheng Ju.