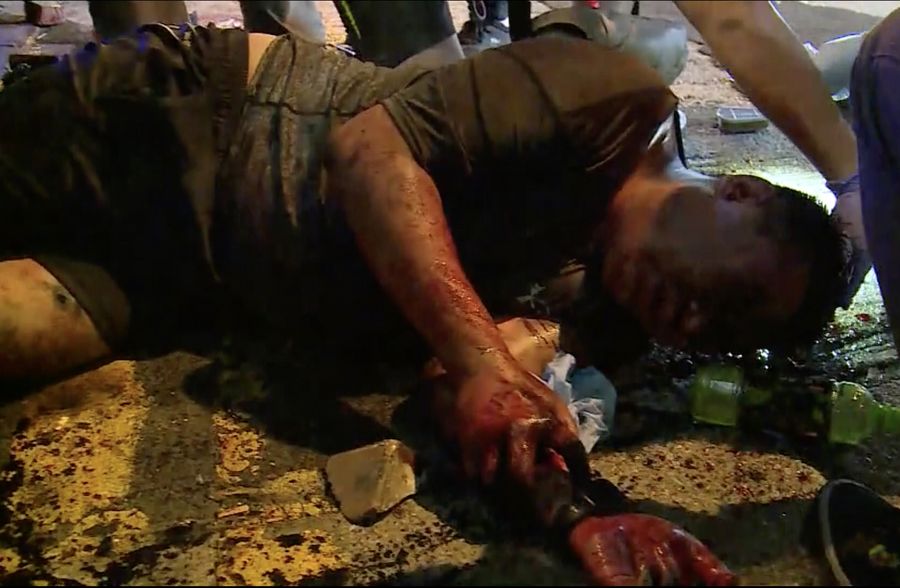 -- On Nov. 11 last year, Yang Xuezhi was captured as the bloodied victim in a picture by Reuters photographer Thomas Peter. The picture was one of a series of images that won the 2020 Pulitzer Prize.

-- Yang is one of many innocents attacked by rampaging rioters during Hong Kong's months-long social unrest.

-- The award-winning picture shared the great misfortune and shone a spotlight on a dark chapter of Hong Kong's rule of law as rioters went on a rampage.

HONG KONG, May 25 (Xinhua) -- With his face covered in blood, Yang Xuezhi stood dazed in a street in Hong Kong's Mong Kok area. Behind him was a masked rioter wielding a hammer stained with the blood of the 27-year-old.

On Nov. 11 last year, Yang was captured as the bloodied victim in a picture by Reuters photographer Thomas Peter. The picture was one of a series of images that won the 2020 Pulitzer Prize.

Yang used to run a small business repairing mobile phones and led a peaceful life in Shenzhen, a Chinese mainland tech hub just a river away from Hong Kong.

It was planned to be a one-day business trip to Hong Kong, but that day went terribly wrong as he became stranded because violent protesters blocked roads across the city bringing traffic to an almost complete halt.

Yang's friends had tried to persuade him not to visit Hong Kong at a time when violence had been gripping the city for months. "I didn't take my friends' advice at that time. I thought those mobs had no reason to attack me as I would not quarrel with them or film what they were doing," he told Xinhua.

He had little idea of what was coming.

On the evening of Nov. 11, Yang took a bus to Mong Kok. He stuck to his plan of not provoking those clad in black, but still became the victim of a savage assault.

Recalling the hundreds of people gathered in Mong Kok that night, Yang said a woman clad in black noticed him holding a mobile phone and came to question him. Hearing Yang speak in Mandarin, the woman shouted and promptly gathered a group of people around him.

What followed were vicious punches and kicks, and some attackers even hurled stones, hammers and other objects at Yang.

"I felt that those mobs treated me like a game just to unleash their anger," Yang said, still unable to figure out why they would beat an innocent passerby like him.

Beaten to the ground, Yang curled up in pain and fear. He was unable to stand up as the mob continued to pummel him while surrounding photographers kept clicking. Some rioters took the chance to rob Yang of cash, phone and other personal belongings.

A battered Yang was finally knocked out even after trying his best to cover his head with his hands and arms. "I might have died there if I forgot to cover my head," Yang said with a shaky voice months after the brutal attack.

Hong Kong police came to the rescue of the dying man in time. They dispersed the rioters and sent Yang to a hospital. After regaining consciousness, Yang found his fingers almost severed.

Yang received around 60 stitches, with scars covering the back of his head. He has lost mobility in the index finger of his left hand and cannot keep the middle finger of his right hand straight.

Though the subject of a Pulitzer-winning picture, Yang finds it hard to cheer up. "The picture taken of me was awarded a top prize, but I've been reduced to being jobless and penniless," he said.

Now it is hard for Yang to continue his work as a phone repairman. He has been out of work for more than six months.

"My hands are unlikely to recover. It's not a simple task for a man like me to find a job," Yang sighed. As his savings ran out, Yang had to rely on his friends for support in a metropolis like Shenzhen.

Yang's mental trauma is even more serious than his physical sufferings. He found himself being mistaken for a gangster due to the scars left by surgery. Nightmares kept haunting him. 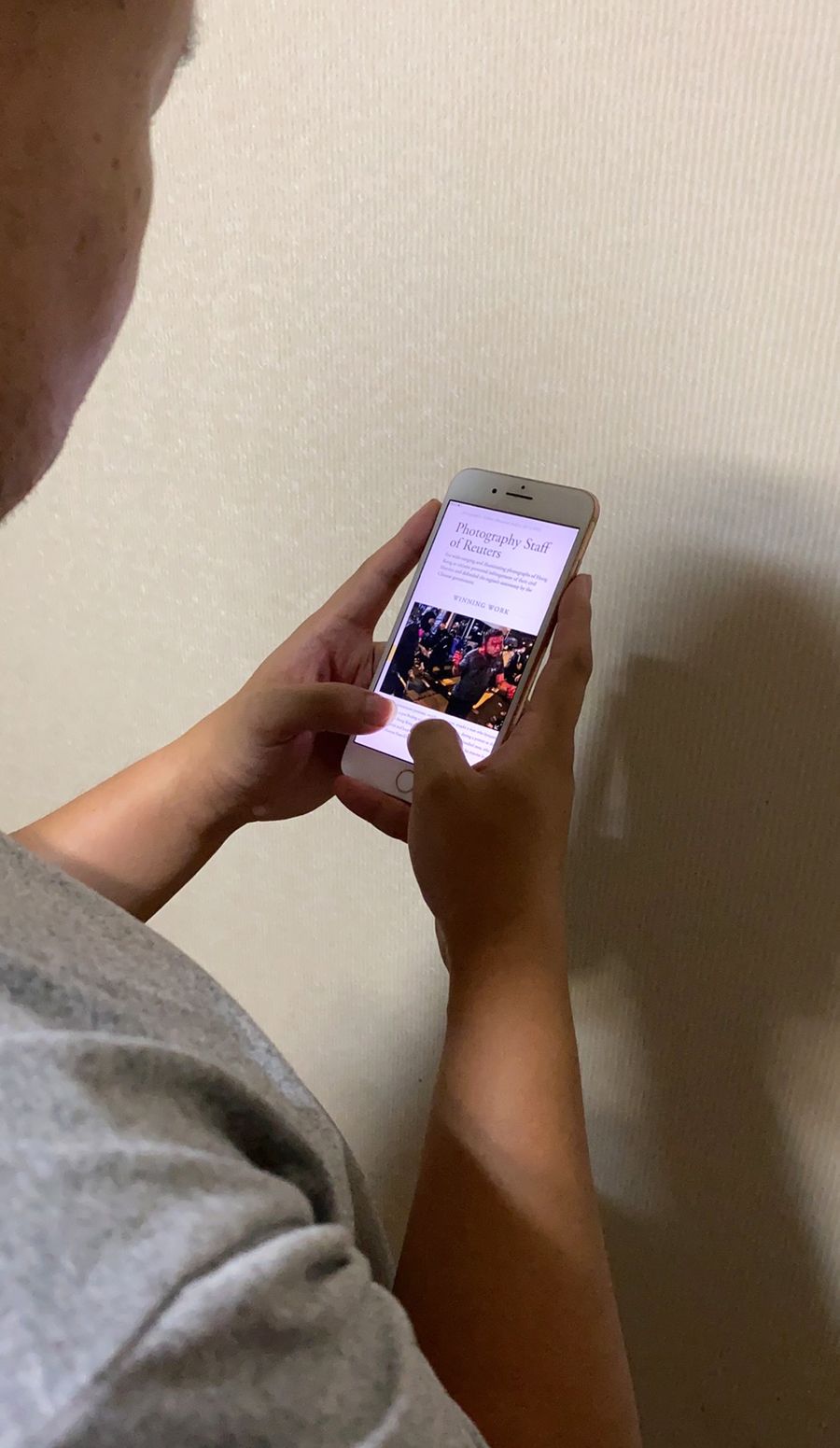 Photo taken on May 24, 2020 shows Yang Xuezhi looking at the photo in which he was captured as the bloodied victim.

Yang is one of many innocents attacked by rampaging rioters during Hong Kong's months-long social unrest. On the day Yang was attacked, a 57-year-old local man was doused with a flammable liquid and set on fire after a dispute with rioters over political views in the Ma On Shan area.

A Japanese man who came to Hong Kong for business was also battered by rioters that day, as confirmed by Japanese authorities the following day.

Until now, Hong Kong has recorded at least 45 cases of people being beaten over political positions, with one death, according to the city's police watchdog, Independent Police Complaints Council (IPCC).

The IPCC recently released a report on the social unrest, indicating that initially peaceful demonstrations turned into violent protests.

The report found that violence occurred more frequently after marches and demonstrations, with escalation and early signs of terrorism. There had been widespread destruction of public and private property, causing long-term damage to the economy.

Yang said he has applied for the assessment of his injuries, hoping that the Hong Kong police could arrest the mobs and he might receive compensation one day. "But they were all masked, so it's difficult to identify them," he said in a hopeless tone.

Unlike other victims, Yang was captured in an award-winning picture. It shared the great misfortune and shone a spotlight on a dark chapter of Hong Kong's rule of law as rioters went on a rampage.