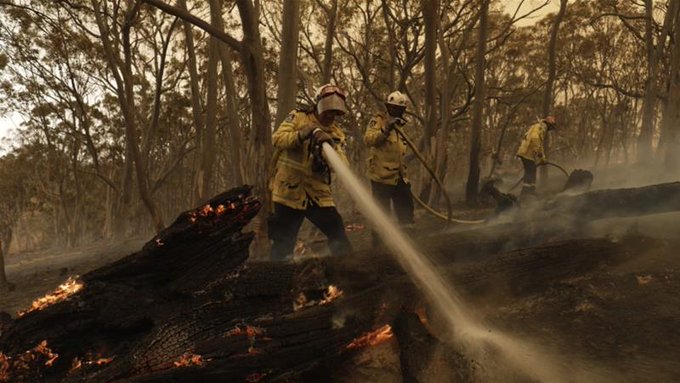 CANBERRA, May 25 (Xinhua) -- Head of climate monitoring at Australia's Bureau of Meteorology (BoM) Karl Braganza has warned that the devastating 2019-20 bushfires were not a "one-off event."

Braganzaon on Monday fronted the first day of hearings for the landmark Royal Commission into National Natural Disaster Arrangements.

Braganza said that since 2003 every jurisdiction in Australia has experienced "really significant fire events," the frequency of which "seem to be increasing."

"Since the Canberra 2003 fires, every jurisdiction in Australia has seen some really significant fire events that have challenged what we do to respond to them and have really challenged what we thought fire weather looked like preceding this period," he said.

"These large fire events when you look back over the 19th and 20th century were not as frequent as they were this century."

More than 10 million hectares of land were burned by the bushfires, which Prime Minister Scott Morrison dubbed the "black summer", killing more than 30 people and destroying thousands of homes and businesses.

Helen Cleugh, a senior principal research scientist from the Commonwealth Scientific and Industrial Research Organisation (CSIRO), said that climate change was interacting with and exacerbating previous weather systems in a way never seen before, according to The Australian Broadcasting Corporation.

"This means that understanding the interaction between climate variability and these drivers and climate change is very important for building preparedness for the changing nature of climate risks into the future," she said.

"Perhaps put more simply, climate change means that the past is no longer a guide to future climate-related impacts and risks."