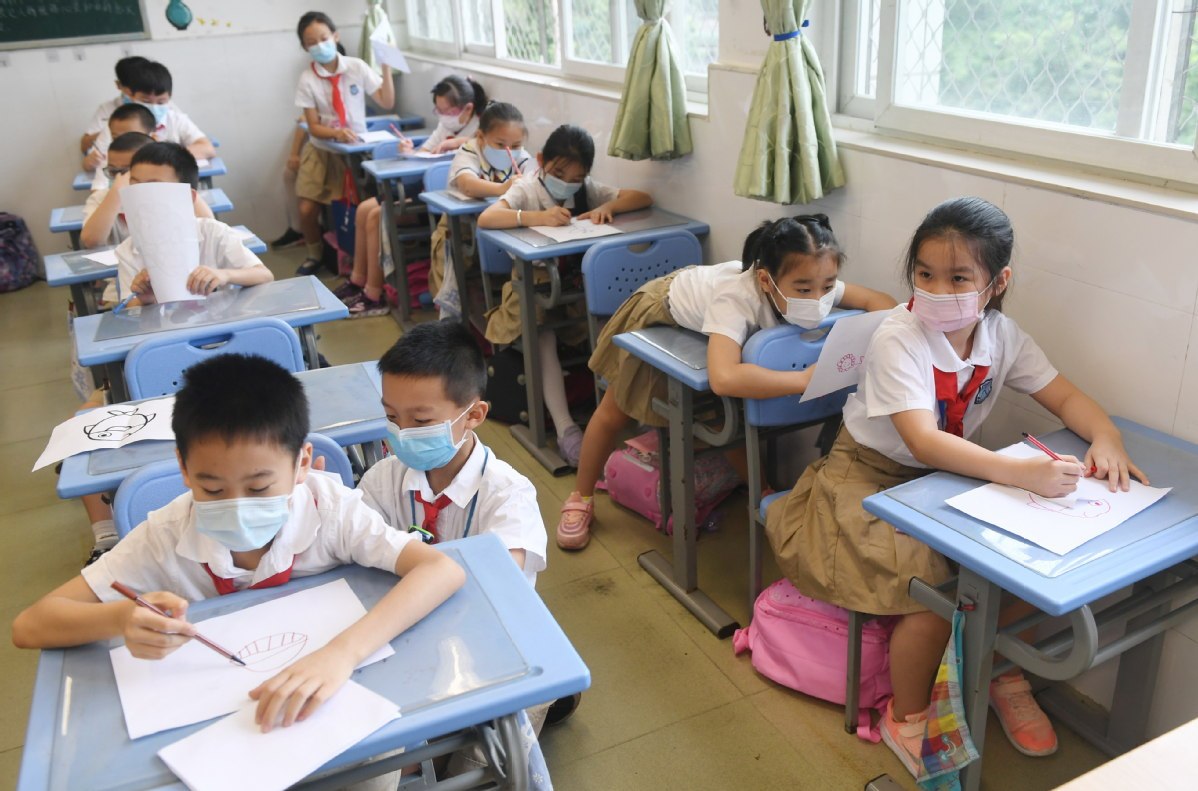 Students draw in a class at the Primary School Affiliated to South China Normal University in Guangzhou, Guangdong province, on May 25, 2020, the day the city's Grade 1 to 3 students returned to school. (Photo: China Daily)

Political advisers from Fujian province have made a joint proposal to lessen the academic burdens on primary and high school students and bolster their physical fitness in response to more Chinese teenagers becoming myopic and obese.

The proposal, endorsed by 108 members of the Chinese People's Political Consultative Conference National Committee, highlighted the need to establish more diversified evaluation standards for students, teachers and schools and reform government management of education systems to slash the burden on students.

"It has been over 20 years since we first proposed lessening the burden on students. However, their school bags only became heavier and their sleep time has increasingly reduced, with lower stamina and rates of myopia and obesity on the rise," said Wu Zhiming, a national political adviser and head of the Fujian branch of the China Vocational Education Association.

Wu, who initiated the proposal, cited recent research by the Chinese Sleep Research Society that showed over 60 percent of children between age 6 and 17 slept less than eight hours a night, with academic pressure the main thing affecting their sleep.

Figures from the National Health Commission showed that the rate of myopia among Chinese children and adolescents reached 53.6 percent in 2018, with their rate of obesity exceeding 10 percent.

Even more worrisome, Wu said, was that more than half of all military candidates have failed physicals and other health tests.

He attributed the troubling figures to the country's education evaluation system, which prioritizes scores, rankings, school entries and diplomas and has forced schools to reduce class hours devoted to physical education.

Meanwhile, the lack of teachers and inadequacies in education capacities, training grounds and facilities had diluted the quality of physical education, he added.

To lessen the burden on students and bolster their level of fitness, Wu said various sectors need to adopt new concepts in their hiring procedures.

"The tendency of employers to have a strong preference for individuals with diplomas from key universities must be reversed, and the level of fitness must be included during their assessment of candidates," he said.

The government must streamline textbooks, reduce redundancies in students' homework and prevent teachers from teaching beyond the syllabus, he said.

Wu also proposed including PE in the entrance exams for senior high schools and colleges and ensuring it carries the same weight as key subjects such as Chinese language or mathematics.