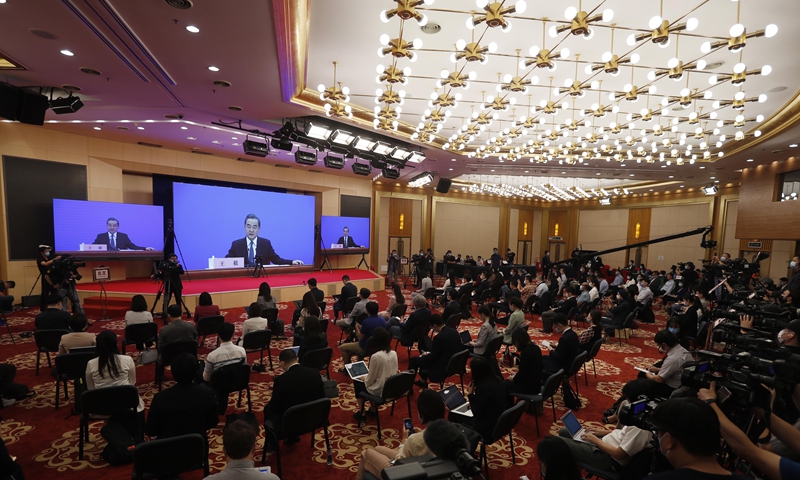 Chinese State Councilor and Foreign Minister Wang Yi meets with media at a press conference on the sidelines of the annual national legislative session on Sunday in Beijing. (Photo: Xinhua)

Chinese diplomats engaged in heated discussions over the images of Chinese diplomats labeled by Western media outlets as "wolf warriors" due to their verbal battles with US politicians throughout the COVID-19 pandemic.

While some highly applauded the diplomats' resolute counterstrikes when attacked by foreign media and politicians, others called for more attention on their tough work behind the scenes after the unfortunate death of Chinese Ambassador to Israel Du Wei.

Chinese Foreign Minister Wang Yi stressed China's adherence to an independent foreign policy of peace when asked about the "wolf" label on Sunday during a press conference.

China has never picked a fight or bullied others but has principles and guts and will push back against any deliberate insult to resolutely defend the national honor and dignity, Wang said.

Chinese Ambassador to the UK Liu Xiaoming said Sunday in an interview with China Central Television that as long as there are wolfs, we must have "wolf warriors" to fight.

"China exported nearly 28 billion masks, 130 million protective suits, more than 73 million testing kits and 49,100 ventilators in March and April - not to mention the contribution Chinese people have made during the global fight against the COVID-19 pandemic. It is without a doubt that Chinese diplomats should introduce the world with the truth when faced with rumors aimed to smear and prejudge China," Li noted.

"Wolf Warrior" is a 2015 Chinese patriotic action film. The term has been used to describe a few Chinese diplomats by some Western media platforms due to their fierce war-of-words with US politicians to defend China's national interests.

These "warrior" diplomats launch salvos on Twitter and other platforms. They hold little back but deploy sarcasm and "aggression" in equal measure, read the report.

The wolf warrior style has attracted many young fans of these diplomats.

However, Ambassador Du's unexpected death due to health reasons on May 17 in Tel Aviv led to public attention on Chinese social media platforms of the heavy work and difficulties for Chinese diplomats.

"It is the work mode of an ambassador to work late night or on weekends, even being on duty 24 hours a day," Liu Guangyuan, Chinese ambassador to Poland, told the Global Times on Saturday.

In his mind, an ambassador is the representative of a country and has to be responsible for the embassy. He has to coordinate work as well as charge in front.

The ambassador had "thought in advance" to apply Chinese diplomatic policies according to the changing situations; "worked in advance" to be at the frontline of virus prevention and keep a close connection with the Polish government and different institutes; and "spoke in advance" to deliver the voice from China, according to a statement from the Chinese Embassy in Poland.

"Born in a great country, at a great time, we diplomats have to fulfill our mission and live up to expectations,  and make every effort to realize the great revitalization of the Chinese nation," said the ambassador. "Our mission is glorious, and I am happy to work as a diplomat."

The Chinese Embassy in Italy said that Ambassador Li insisted on fighting at the frontlines of the China-Italian cooperation against the pandemic. Li met with Italian politicians, sharing China's anti-epidemic achievements and experiences with them, and made preparations for communication between the two sides' leaders.

Li also paid attention to the health and living conditions of the Chinese in Italy, visiting Chinese communities, and holding online conferences with Chinese students.

In March, Li had acute gout due to being overworked and not receiving enough rest. But he braved the pain and remained at his post. He even went to the Italian foreign ministry holding a walking stick to meet with Italian officials for talks over cooperation in combating the pandemic.

Ambassador Liu to Poland has been promoting China's measures and effects in tackling the virus, sharing the idea of a community with a shared destiny for mankind, refuting the smears and attacks aimed at China, and defending China's image and interests.

At the key stage of the epidemic, in several days Ambassador Liu made dozens of calls to Polish officials, parliamentarians, scholars and media and wrote more than a hundred of letters, to promote understanding and support. Local media said the Chinese ambassador was deploying a "charm offensive."

Meanwhile, the ambassador also has been comforting Chinese people in Poland through different ways. He said that the embassy is the home to local Chinese, and the diplomats would hold the fort to welcome the victory against the epidemic.

Moreover, the ambassador has to care about the safety of every employee in the embassy like a "parent."

Thanks to the great efforts of Ambassador Liu and the Chinese Embassy, China and Poland have been working together to fight the pandemic. The top leaders between the two countries have exchanged messages and the embassy has been keeping close contact with local medical departments, sharing treatment solutions from China. The Polish side has borrowed experience from China to upgrade virus prevention plans.

Moreover, the Chinese government and companies have sent aid to Poland. The embassy has also donated test kits to Warsaw hospitals.

Chinese Embassy in Kenya has also been busy with coordinating virus prevention supplies from China to Kenya, the embassy said

It has contributed to the smooth running of major China-Kenya cooperative projects during the outbreak, such as the Mombasa-Nairobi Railway, to ensure the safe transportation of medical materials when roadways were affected, the embassy said.

"Kenya offered China precious support when China was in a difficult time of fighting the virus," it said. "Now we would like to stand with Kenya as it needs China," the embassy said.

Trying best to protect the health of Chinese citizens in Kenya is the top priority of the embassy amid the pandemic. Previously, when four employees of local Chinese-invested enterprises were infected with the virus, Chinese Ambassador to Kenya Wu Peng made sure the patients were sent to a top hospital and kept inquiring about their conditions every day over the phone.

"To our relief, all of the four employees have been discharged from hospital after recovery," said the embassy, adding that there have been no new confirmed cases among Chinese citizens in Kenya.

Wu has a very tight schedule amid the pandemic. Though Wu's offline meetings and visits have been canceled due to the virus, he has had more online conferences and discussions where he has introduced China's virus-fighting experiences to Kenya and helped deliver China's medical supplies and technical support to the country.

Despite the heavy work, diplomats reached by the Global Times said they feel proud when they help overseas Chinese return back home and when they see China's influence grow stronger in the international community, which makes them feel glorious for being a Chinese diplomat.