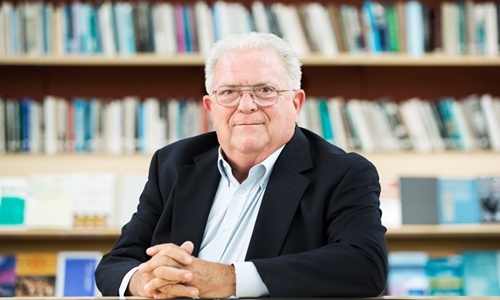 "Sino-American relations are clearly the worst they have been" since former US president Richard Nixon reached out to top Chinese leaders in the early 1970s, said Charles W. Freeman Jr., a former senior US diplomat who has witnessed the establishment and development of China-US diplomatic relations.

He believes there are limits on how far the so-called China-US decoupling can go. However, the current bilateral antagonism will take decades to repair. Why has the veteran US diplomat drawn such a conclusion? To what extent will the bilateral relationship worsen? Will a military conflict break out between the US and China in the Taiwan Straits? Freeman shared his insights with Global Times (GT) reporter Yu Jincui in a recent interview.

GT: You were the main interpreter for Richard Nixon during his 1972 China visit. The ice-breaking visit marks the end of the estrangement between China and the US since the founding of the People's Republic of China in 1949. But now, some American politicians are pushing for the "decoupling" between China and the US. Can the US-China relationship be cut off and go back to the state of isolation? Does the coronavirus pandemic accelerate the decoupling?

Freeman: I was indeed the principal American interpreter, but President Nixon relied on Chinese interpreters rather than me except in some social situations. I interpreted the dialogue (actually it was more like diatribe) between the US secretary of state and the acting Chinese foreign minister (Ji Pengfei). In order to begin to cooperate without disturbing our security partners and friends, we had to reassure them by reviewing and reaffirming our differences. That's why the Shanghai Communiqué begins so unconventionally, with a candid recitation of all the international conflicts on which we had opposing views.

To recall this is to remember the narrowness and precariousness of the strategic reasons that brought the US and the People's Republic of China together. We were starting from complete estrangement and reaching for a common understanding.

As time went on, however, we found we could expand both our recognition of common interests and our willingness to act in parallel to defend them. With reform and opening, we became ever more interdependent, with an immense flow of trade, significant mutual investment, and a huge growth in exchanges of tourists and students. Many people on both sides were pleased by the growing connections between us, but a minority remained opposed to the ideology-free approach inaugurated by the Shanghai Communiqué.

The COVID-19 pandemic is neither the beginning nor the cause but the catalyst of an accelerated effort by American xenophobes and ideological opponents of China to reverse our two countries' interdependence. These efforts, which have the support of a few foolish Chinese as well as anti-China zealots in positions of power in the US, are now fraying many of the bonds between our two societies. But decoupling will injure and impoverish both countries as well as the rest of the world. That sets a limit to how far it can go.

We humans live on a single planet with a highly integrated economy. In the end, in our own respective interests, we must find ways to pursue mutual benefit, notwithstanding our differences. Almost no one outside our two countries wants to see the end of Sino-American interdependence or to be forced to choose between us.  This too will limit how far decoupling can go. Countries friendly to both of us can help us avoid full decoupling and help set the stage for the re-knitting of ties in the future.

GT: You witnessed the establishment and development of China-US diplomatic relations over the past four decades. In your opinion, is now the toughest time in bilateral relations？

Freeman: Sino-American relations are clearly the worst they have been since President Nixon reached out to Chairman Mao Zedong and Premier Zhou Enlai. After 1972, the momentum was toward greater cooperation and away from the likelihood of armed conflict between the two countries. Now it is in the opposite direction. The understandings that have kept the peace in the Taiwan Straits are breaking down and being replaced by increasingly overt military confrontations. The retreat has not yet reached the level of hostility we achieved in the various "offshore island" crises of the mid and later 1950s but - unless we come to our senses - that's where it is headed.

Freeman: The Taiwan question has kept US-China relations hostage. I am not sure the current crop of American policymakers understands how much influence the US has in improving or worsening the prospects for a peaceful outcome of the long-suspended but still un-ended Chinese civil war.

Till now, whenever a crisis over Taiwan has occurred, both Washington and Beijing have been reminded of our common interest in preventing unilateral change, including efforts by Taipei to accomplish this, and have acted accordingly. But, if a crisis were to occur in the current circumstances of great mutual distrust between Beijing and Washington, I am not confident this would again be the case. That makes this a moment of special danger.

The danger is all the greater because, while China and the US both have nuclear weapons, we have different doctrines governing when, how, and to what extent they can or should be used. We are doing essentially nothing to educate each other to our respective views. Neither country wants a nuclear war or an escalation of conflict to the nuclear level, but each must recognize that, in the absence of better mutual understanding than we now have, both are possible, perhaps even probable. In short, how to manage conflict is something we need actively to discuss. Ignoring the possibility that we might fight each other increases the chances that we will end up doing so.

GT: President Donald Trump and Secretary of State Mike Pompeo have heightened their China-bashing rhetoric in recent days. What's the motivation behind this? If it's a tactic for reelection, to what extent will it help Trump win the race?

Freeman: Outside of a few incorrigible fanatics, I consider China-bashing to be almost entirely driven by domestic political considerations but do not believe it will determine the outcome of the US elections. The outcome will be determined by a contest between the personalities and domestic - not foreign - policies of the candidates. In the current climate, refraining from bashing China confers no political advantages, so both sides will engage in it even though neither really gains from it and the national interests will be damaged by it. Sadly, that means that Mr Trump's opponents will not waste time attempting to refute his often very ill-founded and injudicious accusations against China. China's best response to these is to make fun of them, not attempt to refute them.

GT: The current bilateral relationship is worrying. Under what conditions will it be able to improve? Or will it have a turnaround after the November election?

Freeman: Realistically, what is happening is analogous to the Sino-Soviet dispute. That took more than a quarter of a century to set aside. It took another two decades for new forms of friendship and cooperation between China and Russia to be born and consolidated. The mutual disenchantment between China and the US is also likely to take decades to repair. Changes in personalities at the top in either or both countries might help but will not produce fundamental change. Do not count on the November US elections doing so. In time, Sino-American antagonism will end, but not soon.

GT: As the US is still getting entangled in the fight against the coronavirus epidemic, what do you think the US leadership should do to lead the US to overcome the crisis?

Freeman: In the opinion of both many Americans and foreign friends of the US, we now have the least competent and most corrupt government in our history. Rather than accept responsibility, President Trump and his cronies are focused on shifting blame for the catastrophe our country is experiencing onto others. This is an approach to leadership that is clearly counterproductive but, at the moment, there is no sign that it will soon be corrected. Accomplishing peaceful changes of leadership and authorizing the adoption of better policies is why we have elections in the US. We will see what the American people decide.

GT: You said the contrast between how the novel coronavirus crisis has been handled in China and the US is not one of ideologies but between capacity, leadership and citizen trust in government. Can you elaborate this view?

Freeman: I believe in empiricism, not a priori reasoning from ideological assumptions. It seems to me that the performance of governments has varied not by regime type but in accord with their capacity to mobilize an efficient human and material response, to make decisions on the basis of science rather than political advantage or emotions, and to achieve the compliance of the citizenry with their leaders' advice.

It seems that any system - democratic, semi-democratic, autocratic, or whatever - can display these attributes and mount an effective effort to limit the consequences of a crisis. And any of these systems can also fail to do so. So, for example, we have seen very effective responses by New Zealand, the Republic of Korea, Singapore, and China, and very poor responses by the US and UK, Italy, Spain, and Russia. The type of regime these countries have does not seem to determine much of anything. Political culture, the quality of human and physical infrastructure, and the degree of trust in government appear to make the real difference.

Once the current crisis and its attendant political hysteria have passed, perhaps the WHO or another organization can conduct a dispassionate investigation of various countries' responses and draw some scientifically validated conclusions about what works and what doesn't in what context. That would help all of us prepare for the next pandemic or other challenge. In the meantime, I see no benefit and much harm in efforts to use the pandemic to score points in ideological contests or to inflame international or domestic animosities against other countries.