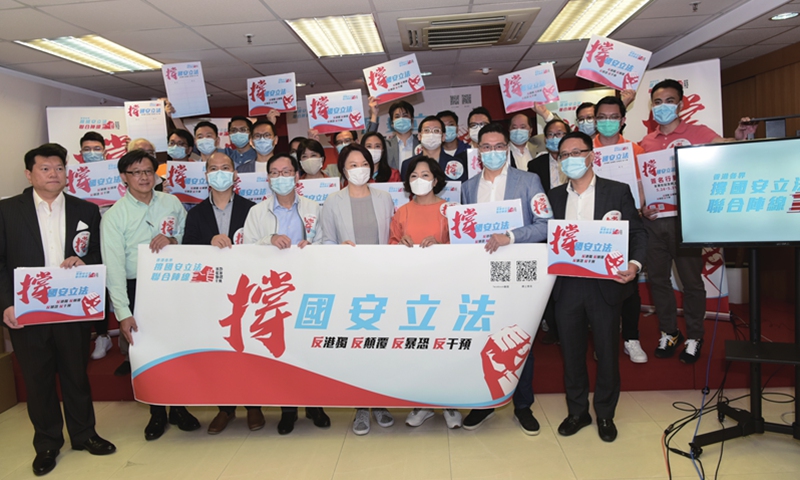 Hong Kong residents from all walks of life collect online signatures and hold a gathering on Sunday morning to show their support for the draft bill to safeguard the national security law to be implemented in the Hong Kong Special Administrative Region. (Photo: GT)

Hong Kong separatists, rioters and illegal protesters are now abandoned by those foreign forces that have long backed them, particularly during the turmoil last year, because their value in stirring up troubles in Hong Kong is decreasing since the mainland started the national security legislation, said analysts, as the Taiwan regional leader vowed to revoke the special status the island extends to the Hong Kong special administrative region (HKSAR).

This move could make it more difficult for Hong Kong residents to visit, immigrate to and invest in Taiwan, and observers noted that this is showing that the separatist Democratic Progressive Party (DPP) has found their "friends" among Hong Kong rioters are getting useless, and it wants to cut off the ties with these lawbreakers to prevent negative impacts.

Tsai Ing-wen, the regional leader of the island and the head of the separatist DPP, posted on her Facebook account on Sunday that the proposed national security legislation by the central government of China was a "serious threat to Hong Kong's freedoms and judicial independence" and that Taiwan would provide the people of Hong Kong with "necessary assistance."

According to the "Law and Regulations regarding Hong Kong and Macau Affairs" of Taiwan, residents from the two special administrative regions can visit and immigrate to the island more easily than people from the Chinese mainland.

Although Tsai said her authority would provide "necessary assistance" to the Hong Kong separatists and rioters who could face legal consequences under the new national security law, Tsai also said if there were a "change in the situation," Taiwan's "law and regulations" regarding Hong Kong "could be partly or even all revoked."

Kennedy Wong Ying-ho, a member for the National Committee of Chinese People's Political Consultative Conference and solicitor at the Supreme Court of Hong Kong, told the Global Times that the DPP has no long-term cooperation plan with these Hong Kong separatists because all values the Hong Kong rioters have is to help the DPP on spreading anti-China or anti-reunification sentiment and once the DPP won the regional election by defeating the pro-status quo KMT, they would be abandoned by the DPP for sure.

Li Xiaobing, a Hong Kong and Taiwan studies expert at Nankai University in Tianjin, told the Global Times on Monday that "the Hong Kong separatists are now just like the chewed gum that is worthless."

In December 2019, Hong Kong separatist groups sent delegations to lobby Taiwan to make an "immigration or refugee law" for providing political asylum to activists involved in turmoil, but the DPP authority refused the request and said the current "laws" in Taiwan was enough to handle the affairs related to the HKSAR, the Hong Kong-based hk01.com reported.

These lawbreakers in Hong Kong can only be useful to the foreign forces if they stay in the HKSAR, and the reason why the DPP authority and some Western governments are voicing supports to them is to encourage them to stay and make more troubles instead of fleeing to their soils because these people are neither high-tech talents nor wealthy investors, they are totally useless to anyone if they left the HKSAR, Li noted.

Some Taiwan netizens also commented on Facebook and YouTube that "Why would we need to receive this garbage who only knows street violence?" and "Keep away from us. Taiwan is messy enough."

Taiwan has no "law" on refugees that could be applied to the Hong Kong protesters who seek asylum on the island.

The number of Hong Kong immigrants to Taiwan jumped 150 percent to 2,383 in the first four months of 2020 from the same period last year, data of Taiwan's "immigration agency" showed.

A senior official familiar with Taiwan's security planning told Reuters that Tsai's comment was a "clear message" to the mainland that Taiwan would "reinterpret" its ties with Hong Kong if the mainland pushes the security legislation through.

Wong said, "Tsai always wants to decrease connectivity with the mainland, as well as Hong Kong and Macao, to get more intertwined with the US and Japan, and push their New Southbound Policy to increase economic activities with Southeast Asia."

The national security legislation for Hong Kong this time has just provided her another excuse for further decoupling with the mainland and the two SARs so that she can further push the DPP's separatist agenda, Li said.

But the facts have already proved that these economies cannot provide a market that the mainland and Hong Kong can offer to the island, Wong noted.

Taiwan separatists are also frightened they might get surprised by the mainland's determination to safeguard the sovereignty and unify the country, and "they know they will face the same consequence one day," Li said.

The mainland has given chances for the Taiwan political parties and anti-government forces of Hong Kong in the past few years, and if they hadn't ganged up with the foreign forces to push separatism and challenge the bottom line rudely, the space for negotiation or even compromise on some sensitive issues would still exist as long as they respect the one-China principle, but now, "the window has closed by themselves," Li noted.