BEIJING, May 25 (Xinhua) -- Ru Zhigang has been busy live streaming to his fans at the base camp of Mount Qomolangma over the past month. The 35-year-old amateur mountaineer has more than two million followers on video sharing social network TikTok, and his fans are interested in a variety of topics, such as what the toilet is like on Earth's highest peak.

That mirrors a fervent concern on Chinese social media about remeasuring the height of Mt. Qomolangma by the country's survey team.

The survey team departed again on Sunday for the summit after their plans to reach the world's highest peak were delayed twice by bad weather. The team expects to reach the summit on May 27, as long as the weather allows.

"It's awesome to watch how those climbers endeavor to conquer the top of this planet. They are genuine heroes!" a netizen surnamed Heng wrote in his comment. 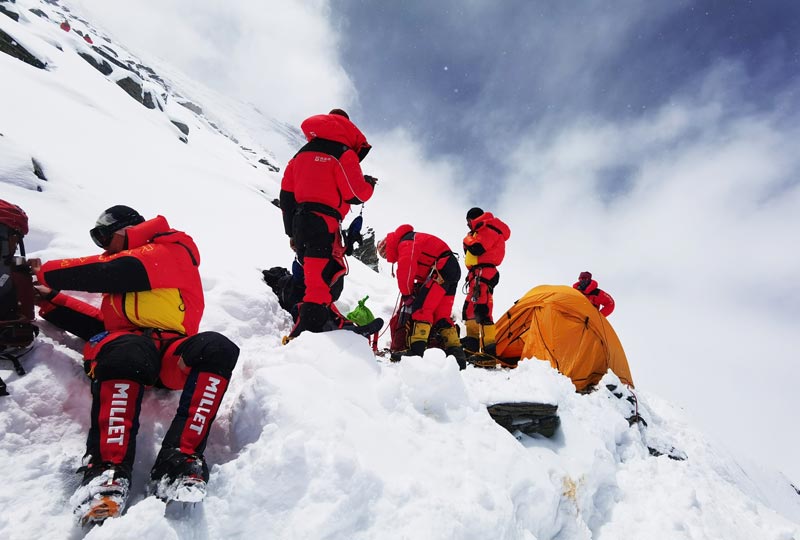 Chinese surveyors are on the way retreating to the advance camp at an altitude of 6,500 meters on Mount Qomolangma May 21, 2020. (Photos: Xinhua)

The measurement campaign marked the 60th anniversary of the first successful ascent of Mt. Qomolangma, which lies on the border between China and Nepal, from the north slope that is notorious among mountaineers for its harsh conditions.

On May 25, 1960, three young Chinese mountaineers - Wang Fuzhou, Qu Yinhua and Gonpo - accomplished the task of conquering the world's highest peak from its difficult northern slope for the first time in human history.

Since that historic climb, numerous expeditions have made their way up to Qomolangma's summit.

In 1975, ethnic Tibetan Phantog became the first Chinese woman to ascend Mt. Qomolangma when a Chinese mountaineering team reached the top and helped surveyors from nine observation stations near the mountain calculate that it stood precisely 8,848.13 meters tall.

Three years later, Reinhold Messner of Italy and Austria's Peter Habeler achieved what had been previously thought impossible: climbing to the Qomolangma summit without oxygen aid. 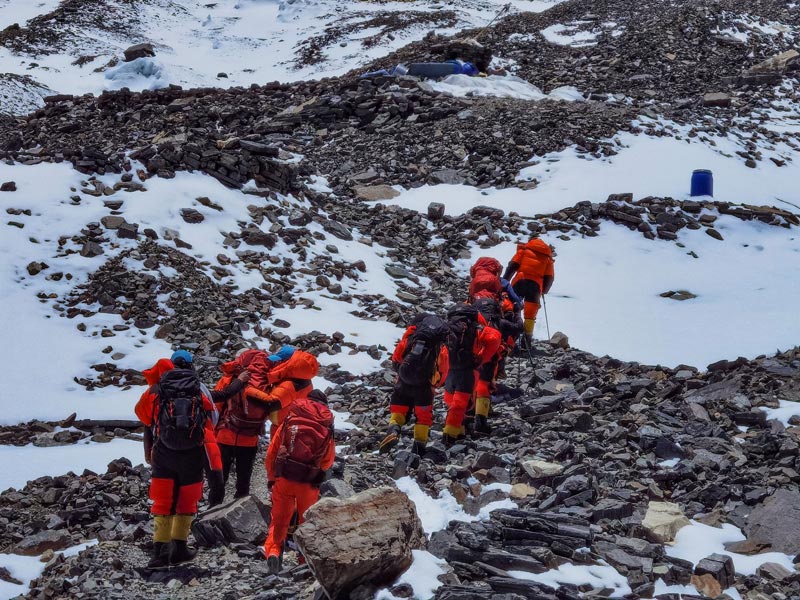 Chinese surveyors set out from the advance camp at an altitude of 6,500 meters on Mount Qomolangma, May 24, 2020. A Chinese mountaineering team on Sunday departed again for the summit of Mount Qomolangma after their plans to reach the world's highest mountain peak were delayed twice by the bad weather.

In a pair of mountaineering firsts, a multinational team of climbers from Nepal, China and Japan scaled Mt. Qomolangma simultaneously from two directions on May 5, 1988, and made a live television broadcast from atop the mountain.

On May 8, 2008, the Olympic flame was carried to the top of Mt. Qomolangma, in an emotional highlight of the Beijing 2008 Olympic Games torch relay.

With almost all records on Mt. Qomolangma having been set, some lament that the "heroic era" of mountaineering seems to have passed. Yet heroics are still alive and well, with mountaineering no longer exclusive to elite professional climbers in China.

More than 100 amateur mountaineers have summited Mt. Qomolangma since 2009. In 2012, four students from China University of Geosciences (Wuhan) reached the top of Qomolangma, in the first ever successful ascent by a college mountaineering team.

"In the past, mountaineering was more of a national mission, while it's more about tourism and leisure activities nowadays," said Wang Yongfeng, vice president of the Chinese Mountaineering Association. 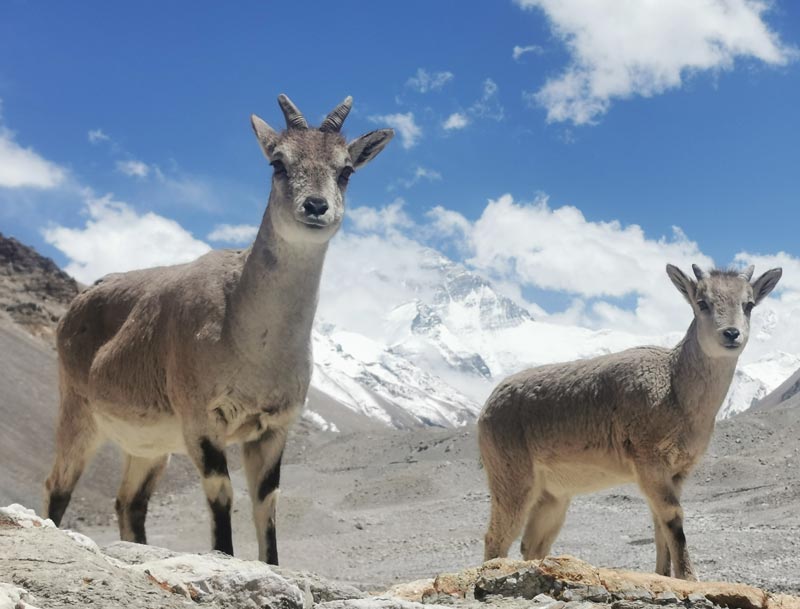 Mount Qomolangma National Nature Reserve was set up in 1988. Covering an area of more than 33,800 square km, it is home to one of the world's most vulnerable ecosystems.

The desire to scale Qomolangma has never died. But human activities have had a negative impact on the environment of the mountain.

Apart from more expeditions, the past decade has also witnessed increased awareness in China of protecting the environment on Qomolangma, at both governmental and individual levels.

Since 2017, local authorities in the Tibet Autonomous Region have organized large-scale activities to remove garbage from the mountain. During three large-scale garbage collection operations carried out in 2018, more than eight tons of household trash, mountaineering and human waste, were disposed of.

Meanwhile, Tibet's regional sports bureau gives two garbage sacks to each climbing team. Everyone descending the mountain needs to carry at least eight kilograms of garbage. If their garbage weighs less than that amount, they are fined.

Volunteers and amateur climbers have also done their part, picking up bottles and plastic bags whenever possible.

A yak transports supplies to the advance camp at an altitude of 6,500 meters on Mount Qomolangma, May 20, 2020.

Protecting the mountain goes far beyond just picking up trash. New legislation has been enacted at the Mt. Qomolangma reserve to conserve the environment surrounding the mountain. It prohibits tree-felling, herding, hunting, collecting and sabotaging of turf in the reserve.

"All these efforts are aimed at making sure climbers leave nothing but footprints," said Nyima Tsering, an official at the Tibetan Sports Bureau.

Wang Yongfeng, a renowned mountaineer in China who has successfully scaled Qomolangma three times, takes a philosophical approach to evaluating his chosen discipline.

"When we started with mountaineering, we talked more about conquering. And in the contact with the mountain, people realize that man and nature are not in a relationship of conquest and being conquered, but a pair of friends," he said.