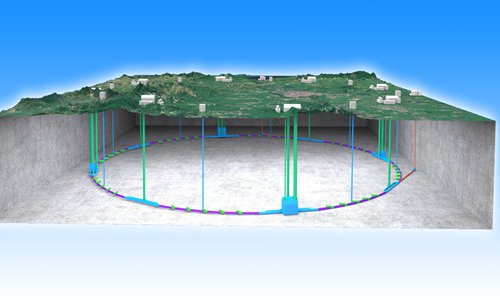 Research and development for the first batch of key equipment for the world's most powerful electron collider, the Circular Electron Positron Collider (CEPC), in China, has made solid progress, according to a leading scientist on the project Sunday.

Wang Yifang, director of the Institute of High Energy Physics (IHEP), under the Chinese Academy of Sciences in Beijing, who is also a deputy to the National People's Congress, made the comments to the Global Times on the sidelines of the ongoing national two sessions in Beijing. The overall development of the CEPC project is moving forward smoothly, with some of the first batches of equipment reaching design standards.

Klystron is among the first batch of key equipment for the super-sized collider, which scored a 60 percent efficiency in the prototype test earlier this year, reaching world advanced levels, up from below 50 percent, according to Wang.

Wang's team aims to produce an even better version of the klystron with 80 percent efficiency this year.

The location for the CEPC has yet to be determined, Wang noted.

The CEPC project will reportedly cost 35 billion yuan ($5.05 billion) and will have a circumference of 100 kilometers, with center-mass energy of up to 240 giga electron-volts, both setting a world record.

Chinese scientists are eyeing the completion for CEPC construction by 2030, Global Times previously learned from IHEP.

The conceptual design for the CEPC passed international inspections in September 2019. Scientists from the US, Europe and Japan have participated in designing the project, and will work on the building process and conduct research with the collider.

The Large Hadron Collider, the Swiss project near Geneva, is currently the world's largest and most powerful particle collider and reportedly the largest machine in the world.

In a bid to maximize the project's service life, scientists are mulling upgrading the electron-positron collider in around 2040 into a proton collider, Wang noted.

By then, the center-mass energy for the CEPC will have reached about 100 tera electron-volts, seven times as powerful as Switzerland's project, Wang said.

The outbreak of the COVID-19 pandemic has brought risks of suspension and delay in implementing procurement contracts for some equipment for large-scale projects due to adjustments in budgeting plans. Wang suggested that legal entities engaged in major project construction should be allowed to raise funds through multiple channels or borrow other funds to ensure that construction tasks are completed on schedule.

After fund advance plans are reviewed, reported and filed with financial regulators, they should be allowed to handle the funds in accordance with relevant procedures in the next fiscal year, he noted.

According to Wang, some large-scale science and technology projects have seen budget cuts in the fiscal year of 2020, some suffering cuts of nearly 50 percent.

A delay of the project would not only prolong the construction time but also adds to the total costs and lead to loss of opportunities in international competition, he said.

Wang revealed that another IHEP project, the cosmic ray observation station on an area equivalent to 200 soccer fields in the wilderness of Daocheng, Southwest China's Sichuan Province, 4,400 meters above sea level, has been affected by budget cuts.