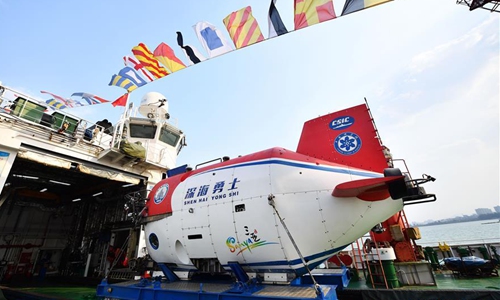 China's manned submersible for 10,000-meter deep-sea exploration is expected to visit the 11,000-meter Challenger Deep in the Mariana Trench, the deepest point in the ocean in the world.

The 10,000-meter manned submersible will be tested after its all-process tank experiment in March in Wuxi, East China's Jiangsu Province, the Science and Technology Daily reported Monday.

Before trying for the final goal of the 10,000-meter dive, the submersible will first conduct tests in shallower waters, Ye Cong, deputy director of the 702 Institute, was quoted by the Science and Technology Daily as saying.

To dive down to the Challenger Deep, the submersible will have to cope with about 1,100 atmospheres, which equals more than 10,000 tons of heavy objects on a 1-square meter space. This brings great challenges in terms of the materials and design of the submersible, according to the report.

Ye also expects to visit the deep trench in this submersible designed by himself.

There are 37 trenches deeper than 6,000 meters in the world, which are the hardest to reach and least known to humans.