TRAVEL Europe keeps easing as US bans travellers from Brazil

Europe keeps easing as US bans travellers from Brazil 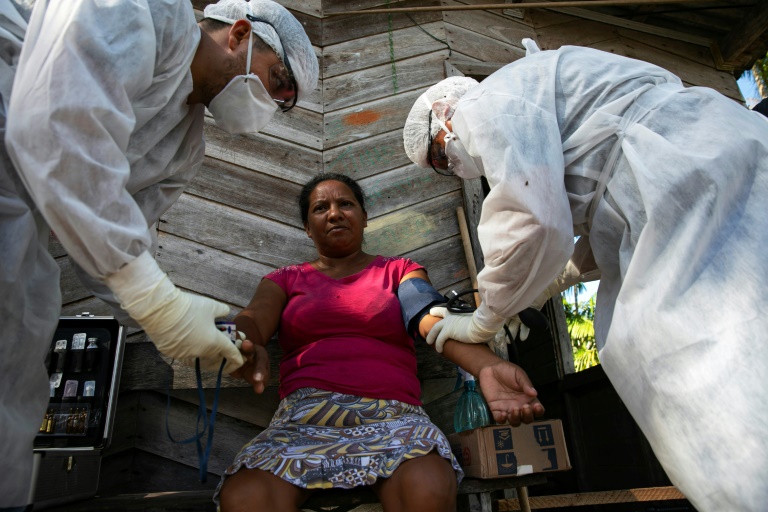 Brazil -- the world's sixth-largest country -- has been declared the latest hotspot with more than 360,000 reported cases. (Photo: AFP)

Europe inched up its coronavirus shutters a little further Monday as nightclubs, museums and swimming pools re-opened in parts of the continent.

While a post-pandemic life was gradually taking shape in what was formerly one of the worst-hit regions, the virus continued its rampage across Latin America, sparking a US travel ban for people coming from Brazil.

Rocketing infection rates in South America have pushed the worldwide caseload to nearly 5.4 million, with deaths approaching 350,000, but with the global economy battered, governments are scrambling to provide relief however they can to businesses and citizens wearying of mass confinement.

Hard-hit Spain eased restrictions in Madrid and Barcelona, with the capital's popular Retiro Park opening its gates Monday for the first time in 10 weeks.

"The reopening of Retiro brings me a feeling of serenity, gives me comfort," said Rosa San Jose, a 50-year-old schoolteacher who had come to the park to walk, wearing a white mask.

Meanwhile, restaurants, bars, and swimming pools were among several types of businesses set to reopen in the Czech Republic, which has reported nearly 9,000 cases.

The nation will even allow events with up to 300 people, and Czechs are no longer obliged to wear face masks in public except in shops and on public transport.

Elsewhere in Europe, cafes and restaurants in Greece were gearing up to reopen on Monday -- but only those with outdoor service.

Nightclubs and bars were set to resume business in Iceland's capital Reykjavik, while zoos and museums will welcome visitors again in Copenhagen, and Rome's swimming pools and sports centres will also reopen.

In Asia, Japan lifted its state of emergency on Monday as new cases slowed to a crawl in the world's third-biggest economy.

But in less wealthy parts of the planet, the news was not so good.

Brazil -- the world's sixth-largest country -- has been declared the latest hotspot with more than 360,000 reported cases, second only to the United States, even as its leader, the far-right President Jair Bolsonaro, plays down the threat from the virus.

In a sign of global concern about the outbreak in Brazil, where more than 22,000 have died of COVID-19, the White House said Sunday it would bar entry into the US of non-Americans who have been in the South American nation in the 14 days before.

Despite the crisis engulfing Brazil, Bolsonaro -- an ally of US President Donald Trump -- has repeatedly argued that lockdown measures are unnecessary and harmful to the economy.

He flouted social distancing rules again on Sunday, attending a rally outside the presidential palace in Brasilia to greet a cheering rally, ditching his face mask, shaking hands and embracing supporters – even hoisting a young boy onto his shoulders at one point.

The leader grinned as flag-waving supporters shouted "Legend!" and "The people support you, Bolsonaro!"

But despite the strong support from his political base, he has faced scathing criticism for his handling of the outbreak as experts warn Brazil's healthcare system is overwhelmed.

And while his government has imposed a Brazil travel ban over the virus, Trump remains frustrated with lockdown measures at home, and -- with 40 million jobs lost this year -- is aggressively pushing a US reopening despite the national death toll approaching 100,000.

Again trying to project confidence, Trump played golf for a second straight day on Sunday, after avoiding the fairways since March 8.

The polarised opinion on lockdowns in America was on display after video footage emerged of a jam-packed swimming pool in Missouri over the weekend, despite orders mandating social distancing measures.

"Scenes such as this one... are inconceivable during the pandemic. Do they all have death wishes?" one woman tweeted.

Another countered: "Just Americans being free and making their own decisions and enjoying life."

Despite experts warning against reopening too soon, and recommending some form of confinement measures until a vaccine or treatment is developed, governments are feeling immense pressure to ease lockdowns.

India -- which has imposed the world's biggest lockdown -- resumed domestic flights on Monday with the government desperate to get Asia's third-largest economy moving again.

But infections are still surging in India, leaving passengers and airline staff worried about the risks of travel resumption.

One airline employee -- wearing gloves, a mask and a protective face shield -- said she and many other colleagues felt "very nervous" about starting work again.

"Dealing with so many people at this time is so risky," she told AFP. "I must have interacted with at least 200 people since this morning."

Adding to the mix of economic turmoil and public anger, a scandal was brewing in Britain where Prime Minister Boris Johnson was on Sunday forced to defend his top aide Dominic Cummings, who has been accused of having breached the government's own lockdown rules in March and April.

"He has acted responsibly and legally and with integrity," Johnson said of Cummings.

But Tory MP Craig Whittaker tweeted: "You cannot advise the nation one thing then do the opposite."