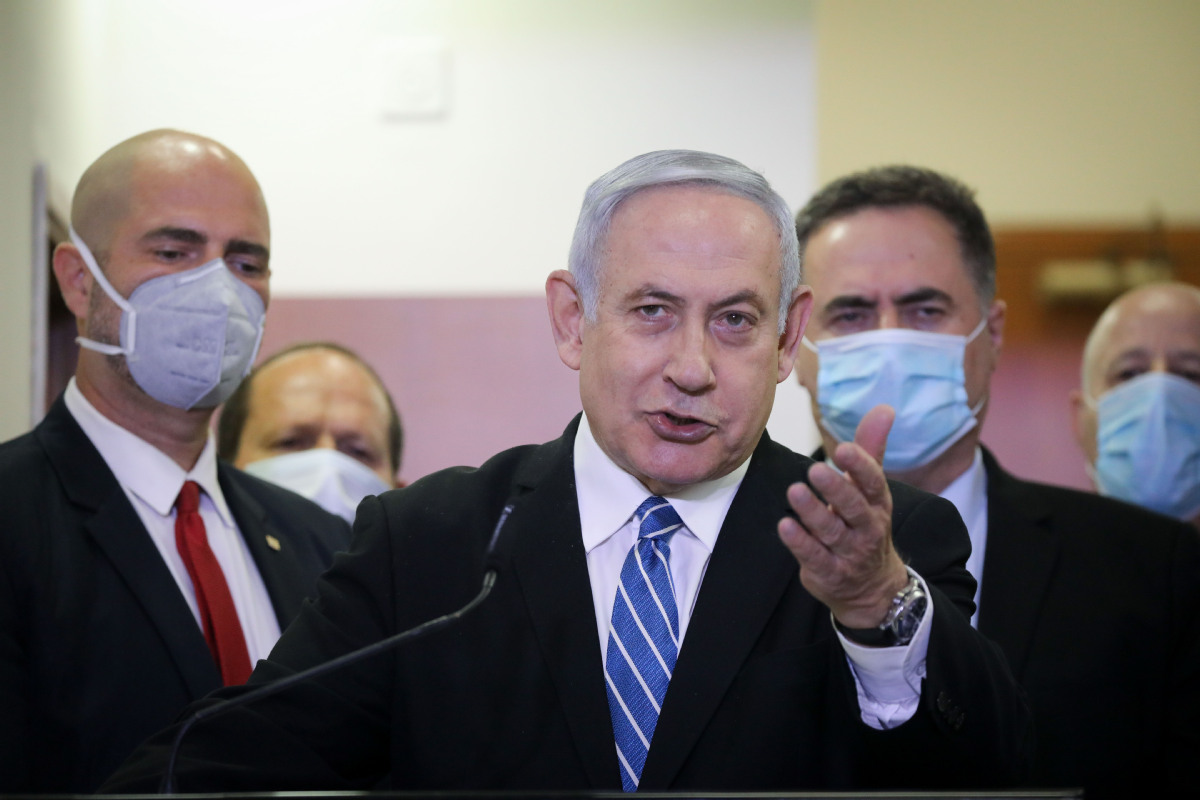 Israeli Prime Minister Benjamin Netanyahu delivers a statement in Jerusalem on Sunday before entering a courtroom where his corruption trial opened. (Photo: Xinhua)

JERUSALEM－With newly appointed ministers behind him, Israeli Prime Minister Benjamin Netanyahu called his trial that opened on Sunday "an effort to bring him down" and his right-wing political camp.

Netanyahu came to the court escorted by his supporters from the government, some of whom are in charge of the enforcement agencies and of a committee that appoints court judges.

Facing a "battle for life", Netanyahu is striving to use government power as his most effective weapon.

He has endeavored from the beginning of the investigations to depict himself as "a victim of a witch hunt" led by the left-wing side of politics.

"I stand before you with a straight back and head raised high," he said, surrounded by leading ministers of his Likud party. "The objective is to depose a strong, right-wing prime minister, and thus remove the nationalist camp from the leadership of the country for many years."

Outside the courthouse, hundreds of supporters rallied in his defense, packing a narrow street while waving Israeli flags and banners denouncing what they called a corrupt prosecution seeking to topple a leader of historic proportion. Others gathered at his official residence to demonstrate against what they called a "crime minister" and carried posters calling for his resignation. They faced off across police barricades with the prime minister's backers.

The corruption trials of Netanyahu in three different cases involve serious charges of fraud, bribery, and breach of trust. He denies all the charges and accuses the media and legal officials of being behind the claimed witch hunt.

But no one could imagine anyone else able to form an alternative government in the near future, even Benny Gantz, Netanyahu's chief election rival.

Under a rotation agreement, Netanyahu will continue to lead the government for 18 months before handing over the premiership to Gantz. And not many believe that Netanyahu would hand over the post of prime minister to Gantz in 2021.

Gantz, the alternate prime minister and defense minister, signed the agreement with Netanyahu, enabling the latter to establish the government, in the act of uniting Israeli society during the COVID-19 crisis.

Yossi Shain, head of the school of political science at Tel Aviv University, said Gantz is trying not to break the government right now.

'No value' for Gantz

Gantz, a former chief of staff of the Israeli military, entered politics a year ago claiming he was seeking to overthrow a "corrupted" Netanyahu. But after three elections, they joined hands.

Gayil Talshir, an expert at the department of politics in the Hebrew University of Jerusalem, said Gantz has prevented Netanyahu from using the government to terminate his trial completely.

If Netanyahu had been able to form his dream government without Gantz, with just right-wing parties, they could have passed laws that undermine the trial at least as long as Netanyahu is the prime minister.

"I think that we will hear many statements of Netanyahu's party members against the trial, the judges, and the police," Talshir said.

Netanyahu, just minutes before his trial started, said in a speech to the media that the former head of the Israeli police, who he appointed, had committed criminal offenses such as leaking information the investigations.

Netanyahu accused the official of wrongdoings, as well as another high-ranking police officer. "These are the people who led the investigations against me," he said. "I am sure they did this deliberately and willingly."

Talshir thinks that the new appointee by Netanyahu for the minister of public security who is now in charge of the police would make sure no new investigations against the prime minister would happen.

Analysts also said some ministers appointed by the new government may not be the best fit for their public positions, but perfect for helping Netanyahu in the trial.

Netanyahu, 70-year-old and the longest-serving prime minister in the history of Israel, was first elected in 1996 and served until 1999, and has been in power continuously since 2009.