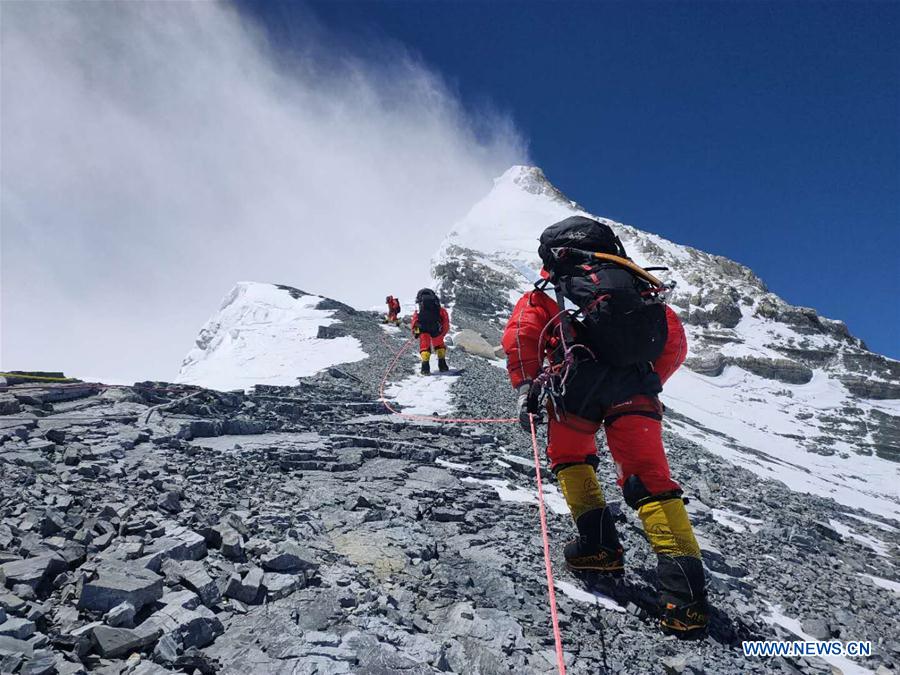 Chinese mountaineering guides work on a route to the summit of Mount Qomolangma on May 26, 2020. (Photo: Xinhua)

MOUNT QOMOLANGMA BASE CAMP, May 27 (Xinhua) -- An eight-member Chinese surveying team set off to reach the summit of Mt. Qomolangma, the world's highest peak, from a mountain camp at an altitude of 8,300 meters at around 2:10 a.m. Wednesday.

The team of surveyors arrived at the camp at around 3:40 p.m. on Tuesday and rested for about 10 hours. Meanwhile, six mountaineering guides reached the summit and finished installing facilities at 4:35 p.m., after which they descended.

At a height of 8,600 meters, the team will ascend through the "second step", an almost vertical wall of several meters high and extremely difficult to climb, even for professional climbers.

A party of Chinese climbers placed a semi-permanent "China ladder" there in 1975, consisting of several metal ladders which reduce climbing difficulty. The "China ladder" has been replaced by new ladders at the "second step" to aid climbers.

China initiated a new round of measurements to determine the height of Mount Qomolangma on April 30, but bad weather twice delayed plans to reach the summit.

Since the founding of the People's Republic of China in 1949, Chinese surveyors have conducted six rounds of scaled measurements and scientific research on Mount Qomolangma and released the height of the peak twice in 1975 and 2005, which was 8,848.13 meters and 8,844.43 meters, respectively.