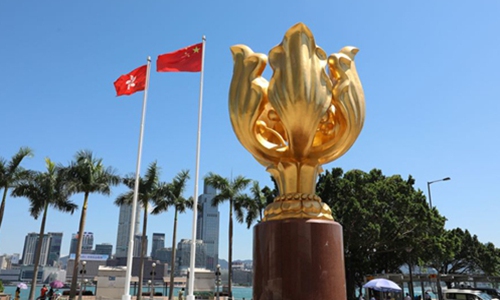 Former Hong Kong governor Chris Patten published an article entitled "The G7 must stand up for Hong Kong's freedom" in the Financial Times on Monday, claiming that "Britain must take the lead in standing up for Hong Kong" and accusing the Chinese mainland of being "an enemy of open societies everywhere." British Prime Minister Boris Johnson is reportedly ready to accept hundreds of thousands of Hongkongers to Britain if the Chinese mainland "clamps down further on the former British colony."

Hong Kong is one of the few places where Britain can narcissistically show off its position as a former overlord state.

It seems some British people still regard Britain as Hong Kong's so-called savior. As a representative of UK's hypocritical colonialism, Patten is still living in the colonial era. Ever since Hong Kong returned to China in 1997, the city has had nothing to do with the UK. However, some British politicians like Patten still dream that the UK has dominance over Hong Kong.

The UK today hardly leads the world in politics, economy or military strength. Some in the UK still believe that they are living in a great major power. But the UK, once on which the sun never set, is no longer the great empire it used to be.

"We owe it to the people of Hong Kong, whose only crime is that they want to live with the freedoms they were promised," Patten said in his article. However, did the British colonists bring any freedom and democracy to Hong Kong before 1997? No.

The UK implemented a highly centralized political system in Hong Kong after it occupied Hong Kong in 1841. Hong Kong's colonial governors were appointed by the British monarch instead of being democratically elected, and they controlled an extremely great political power. Under British rule, Hongkongers could not enjoy equal citizenship and equal participation in politics, and they just suffered from British bullying.

Indeed, UK's ideology still affects some people in Hong Kong. However, the UK can hardly affect the Chinese central government's policies. The UK's intervention in Hong Kong affairs will be nothing but verbal complaints, trying to show its sense of presence. It can never truly affect Hong Kong affairs.

The UK is deeply trapped in the COVID-19 epidemic. It may be wiser for the UK to first think about controlling the epidemic and returning to the normal life as soon as possible.