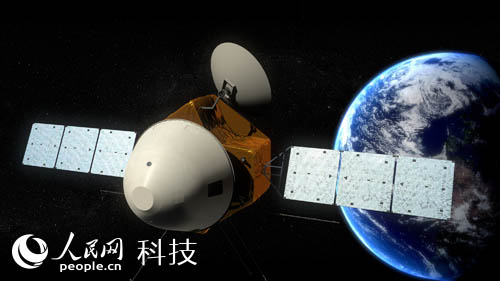 Tianwen-1 aims to orbit, land and rove in one go to conduct a global and comprehensive exploration of Mars and carry out detailed surveys of key areas of the Martian surface, said Zhao Xiaojin, Party chief of the China Academy of Space Technology, who is also a member of the 13th National Committee of the Chinese People's Political Consultative Conference (CPPCC), China's top political advisory body.

No country has completed such an undertaking in its exploration of the red planet, he noted, adding that this means the Chinese mission faces unprecedented challenges.

China is exploring a new path for Mars exploration rather than repeating what other countries have already done, which demonstrates the country's technological development and great confidence in its aerospace sector, Zhao said.

If the mission is successful, it will close the gap in deep space exploration technology between China and other aerospace powers such as the U.S. and Russia, said Bao Weimin, head of science and technology at China Aerospace Science and Technology Corp and academician at the Chinese Academy of Sciences, and also a member of the CPPCC National Committee.

According to Bao, the mission has laid out five scientific objectives, mainly related to the study of Mars’ space environment, its physical features and its surface structure.

Zhao added that Tianwen-1 along with the combined Mars orbiter and lander is expected to be launched by a Long March 5 Y4 carrier rocket.

The biggest challenge is the "seven minutes of terror", a phrase describing the entry, descent, and landing process. During this period, the landing segment for the rover is required to reduce its speed from 20,000 kilometers per hour to zero.

China also plans to conduct a Mars sample return mission by around 2030, as well as a Jovian System probe mission, said Bao.