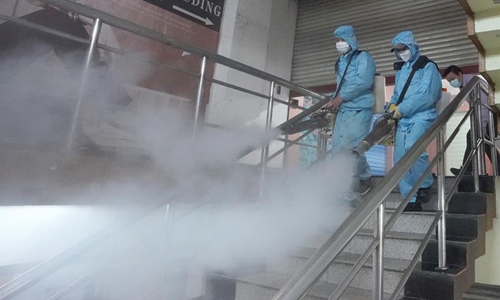 Nuclear-related irradiation sterilization, which offers high security, conserves energy and is environmentally friendly, has been given full play in the past months during battle against COVID-19, a political adviser said, suggesting this technology be promoted in the medical field and emergency response system.

If nuclear power is known as "heavy industry" in the nuclear field, other applications such as irradiation technology are referred to as "light industry," which has had a low profile. Irradiation sterilization means using cobalt Y rays or high-energy electron beams produced by an accelerator to sterilize objects. As Y rays and electron beams have penetrating power, they can change the microbial structure of items and then achieve sterilization.

In an interview with the Global Times on Tuesday, Luo Qi, a member of the National Committee of the Chinese People's Political Consultative Conference (CPPCC), said that irradiation sterilization has helped to protect medical staff in the COVID-19 epidemic.

Luo, an academician of the Chinese Academy of Engineering and Party secretary of the China Academy of Atomic Energy under the China National Nuclear Corp, said sterilization and disinfection of medical supplies such as protective suits is key to winning the battle against the epidemic.

Using the traditional sterilization method, it takes seven to 14 days to finish disinfection. However, irradiation sterilization can shorten the time to one day, greatly improving the sterilization effect and efficiency.

In addition, no waste gas or liquid will be generated by this means, which is energy-saving and environmentally friendly. "It is very safe," he said.

In response to the COVID-19 outbreak, the corporation is also developing a new technology to prepare radioactive drugs that can eliminate the novel coronavirus, Luo said. This effort "has achieved phased progress."

Although the application of nuclear technology in China has reached a certain scale, it still accounts for a relatively low proportion of the economy, which is still far behind developed countries.

According to Luo, during this pandemic, more than 40 percent of medical supplies were sterilized with irradiation abroad, compared with 10 percent in China.

During the two sessions, Luo said his proposal focuses on accelerating the development of the application of nuclear technology and promoting nuclear medical security.

He suggested the country further increase policy support and investment in nuclear medicine, such as radiological therapy, nuclide diagnosis and medical imaging, and support the role of nuclear technology in the national emergency system.

In February, thousands of protective suits sterilized by radiation were sent to Wuhan, Central China's Hubei Province where there was a severe shortage of disposable medical protective suits.

Using irradiation technology to sterilize medical instruments is not new. In 1956, Johnson & Johnson was the first company to use the electron beam irradiation operating gown, which pioneered the irradiation sterilization of medical devices.

The common disposable infusion sets, needles and surgical instruments in hospitals are also sterilized by irradiation. The technique has also been applied in the food industry, especially for astronauts, to keep their food fresh.

Some people wonder whether irradiated clothes or food have side effects, such as residual radioactivity, but industry insiders explained that it is not a problem because the food or clothes only absorb the energy of the radiation, which is a physical sterilization process without any chemical substances. As the food and clothes have no direct contact with radioactive substances, there is no chemical residue and also no radioactive contamination.