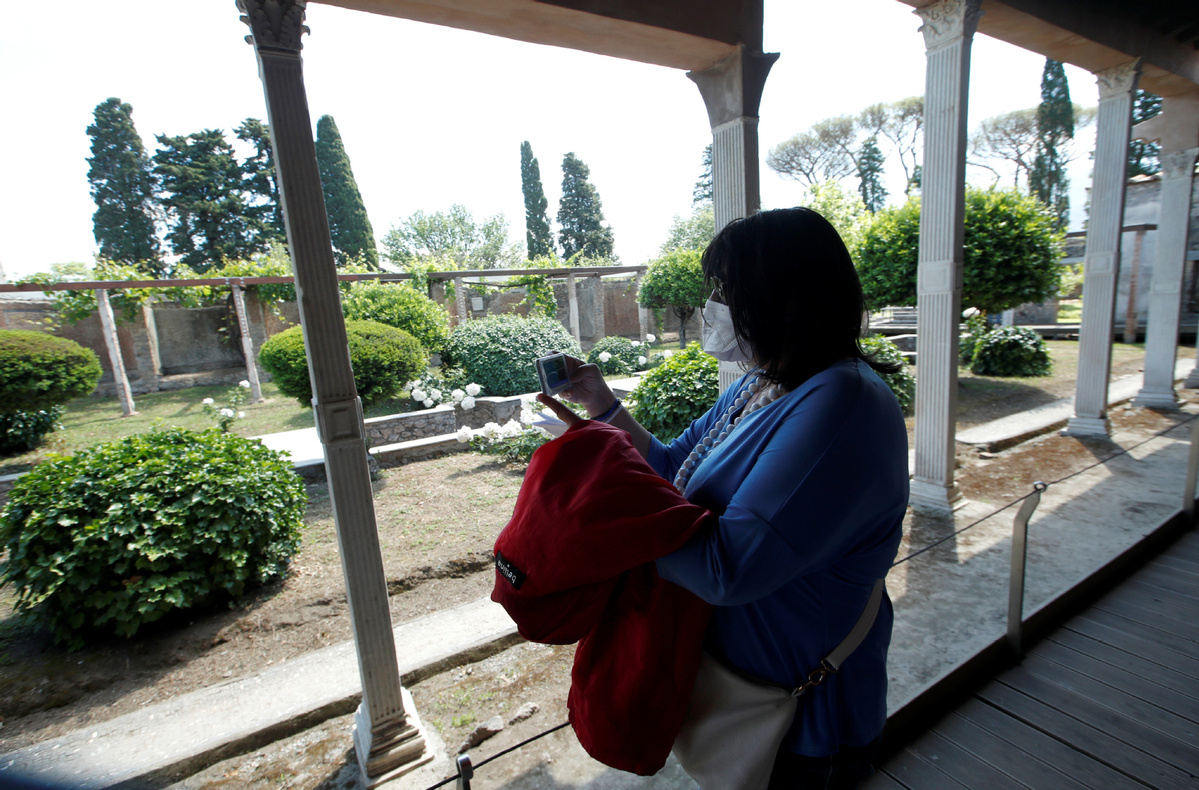 An Italian tourist wearing a protective face mask visits the archaeological site of the ancient Roman city of Pompeii as it reopens to the public with social distancing and hygiene rules, after months of closure due to an outbreak of the coronavirus disease (COVID-19), in Pompeii, Italy, May 26, 2020. (Photo: Agencies)

As markets and industries lick their wounds from the impact of the coronavirus crisis, European governments are turning their focus to reopening and rescuing the battered economy.

France on Tuesday unveiled a major recovery plan to revive the country's auto industry, which has been crippled by the loss of sales and production during the coronavirus pandemic and the lockdown aimed to limit the spread of COVID-19.

Following a visit to a Valeo car parts factory in northern France, President Emmanuel Macron announced an 8-billion-euro (8.78 billion US dollars) rescue plan to help the recovery of the auto industry.

"The state will provide more than eight billion euros in aid to the sector," Macron said.

The president, who met with industry bosses early in the day, said the "historic plan", which aims to "face a historic situation", was based on a support package and a scrappage scheme to shift towards less polluting vehicles.

"We need to defend our industry and make France Europe's top producer of clean vehicles," with an output of one million electric and hybrid cars per year by 2025, said Macron.

"Bankruptcies should be avoided at all costs," he said. To help promote clean cars, he also announced a higher state bonus for the purchase of a clean vehicle by individual consumers and businesses, from 6,000 euros to 7,000 euros.

According to figures released by the French Automobile Manufacturers Committee, sales of French vehicle brands plunged by 84.2 percent in April.

Lufthansa said the WSF would provide up to 5.7 billion euros in the form of "silent participation" in the company's assets, of which nearly 4.7 billion euros would be classified as equity in accordance with related financial rules.

Lufthansa was operationally healthy and profitable before the pandemic and has good prospects for the future, but it came into an existential emergency due to the coronavirus crisis, the WSF Committee, which consists of representatives of several federal ministries, said in a statement.

In a phased approach, European countries are cautiously easing their border controls, as part of their efforts to reopen the tourism industry, which is one of the hardest-hit sectors and accounts for about 10 percent of the European Union's economic output.

On May 13, the European Commission had offered a tourism and transport package, recommending that EU member states with "similar overall risk profiles" on the pandemic should open to tourists from each other's countries. Two days later (on May 15), Estonia, Latvia and Lithuania became the first EU nations to reopen their shared borders.

Starting on Tuesday at midnight, Hungary, Slovakia and the Czech Republic will reopen their respective borders to each other's citizens for stays of no more than 48 hours without quarantine, Hungary's Minister of Foreign Affairs and Trade Peter Szijjarto said on social media.

Also on Tuesday, the Czech Republic began reopening its border crossings with neighboring Germany and Austria.

"From Tuesday, we are opening all railway and road crossings with Germany and Austria, as well as the Hrensko river crossing, and we are abolishing comprehensive border controls," Czech Interior Minister Jan Hamacek said on Monday in a statement, adding that proof for a negative COVID-19 test will still be mandatory and border checks will be random.

But crossing borders in non-designated areas will still be prohibited until June 13, and the external borders of the Schengen area will be closed until at least June 15, Czech media reported.

Bulgaria, Greece and Serbia had already reached an agreement to allow tourists from the three countries to travel without a quarantine period of 14 days, starting from June 1.

Meanwhile, the German government is planning to lift a travel warning for tourists from 31 European countries from June 15, ending an unprecedented directive against all international travel, German news agency DPA reported on Tuesday.

Alongside Germany's 26 fellow EU member states, the warning will also be lifted for Britain and the four non-EU members of the borderless Schengen area -- Iceland, Norway, Switzerland and Liechtenstein, DPA reported.

Germany's plans, which are contingent on continuing positive trends in the coronavirus pandemic, could be approved by Chancellor Angela Merkel's cabinet as early as Wednesday, DPA said.