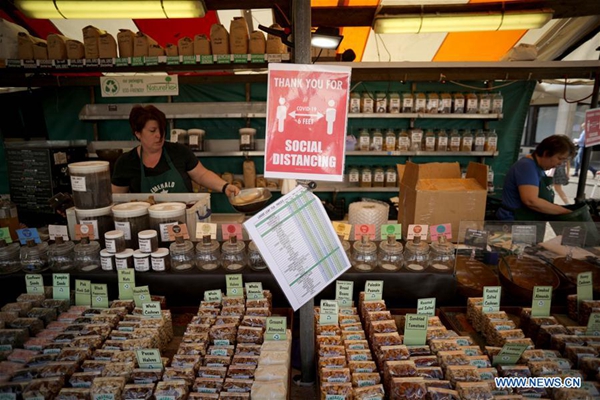 Photo taken on May 22, 2020 shows a market stall in Cambridge, Britain. (Photo: Xinhua)

Another 134 COVID-19 patients have died in Britain as of Monday afternoon, bringing the total coronavirus-related death toll in the country to 37,048, the Department of Health and Social Care said Tuesday.

As of Tuesday morning, 265,227 people have tested positive in Britain, a daily increase of 2,004, according to the department.

The Office for National Statistics (ONS) announced Tuesday that 42,173 deaths involving coronavirus occurred in England and Wales up to May 15. The ONS uses an alternative measure as its figures are based on all mentions of COVID-19 on a death certificate, including suspected cases.

Together with the latest figures in Scotland and Northern Ireland, 46,383 deaths have so far been registered in Britain where COVID-19 was mentioned on the death certificate, according to The Guardian newspaper.

He also announced that Britain is starting a trial using the antiviral medicine Remdesivir on selected COVID-19 patients, describing it as "probably the biggest step forward in the treatment of the virus since the crisis began".

The antiviral medicine was developed for Ebola, but initial trials on COVID-19 patients showed it could reduce recovery times by about four days.

As to the test and trace program, he said the project will be "incredibly important" in implementing a "more targeted lockdown".

"We will have local lockdowns in future where there are flare-ups and we have a system we are putting in place with a combination of Public Health England and the new joint bio-security center, along with the local directors of public health who play an absolutely crucial role in the decision-making in the system to make sure if there is a local flare-up there is a local lockdown," he noted.

It is peoples' "civic duty" to self-isolate if they are asked to, he added.