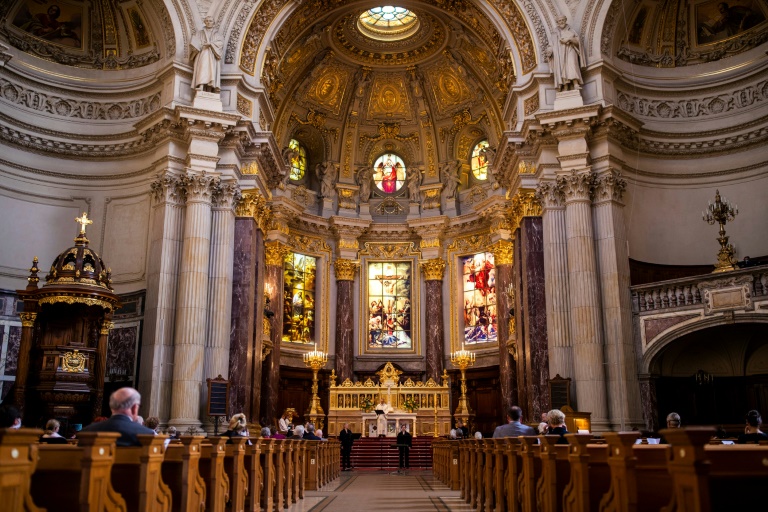 Berlin Cathedral Choir members were infected during a rehearsal on March 9 when the coronavirus was a distant worry. (Photo: AFP)

When the Berlin Cathedral Choir gathered for a rehearsal on March 9, the new coronavirus was still a distant concern, with fewer than 50 confirmed cases in the German capital.

But five days later, one of the ensemble's 80 singers contacted choir director Tobias Brommann to say she had tested positive for COVID-19.

Within two weeks, around 30 members had tested positive and a further 30 were showing symptoms -- including Brommann himself, who was struck down with a headache, cough and fever.

"We also can't be sure if those without symptoms were not infected too, as we have not done antibody tests," Brommann told AFP.

Hardly considered an extreme activity up to now, singing -- especially choral singing -- is quickly earning a reputation in the pandemic as about the most dangerous thing you can do.

Similar horror stories have emerged from choirs around the world, including one in Amsterdam where 102 singers are reported to have fallen sick with COVID-19.

Though much is not yet understood about how the new coronavirus spreads, anecdotal evidence has been enough to convince German authorities that singing is a particularly high-risk activity.

Under new freedoms being gradually introduced across the country's states, Germans can meet friends in the park, dine in a restaurant, play sports, go to church, browse the shops, watch football and even go swimming.

But singing remains broadly off limits, and it looks likely to stay that way for the foreseeable future.

In recommendations for the resumption of church services published in April, the federal government stated that singing should be avoided "because of the increased production of potentially infectious droplets, which can be spread over greater distances".

Several states have heeded the advice and banned singing from services.

The fears are partly based on the fact that when singing, as Brommann points out, "you inhale and exhale very deeply, so if there are virus particles floating in the air then they can get into the lungs relatively quickly".

But there is also evidence to suggest that singing produces especially high numbers of potentially infectious micro-particles. According to a study published in the Nature journal in 2019, saying "aah" for 30 seconds produces twice as many such particles as 30 seconds of continuous coughing.

Indeed, many choirs fear their future looks bleak. Five German boys' choirs have written to the government saying their existence is under threat and demanding action to save them from ruin.

At the Church of the Twelve Apostles in Berlin's Schoeneberg district, there have been no choir rehearsals since early March.

Soprano Heike Benda-Blanck, 59, has been singing there for 10 years.

Some research has given cause for optimism. The Bundeswehr University in Munich published a study in early May showing that singing only disturbs air flow up to half a metre (1.6 feet) in front of the person.

Freiburg University's Institute for Performing Arts Medicine has also published guidelines for singing partly based on a study it carried out in the southern city of Bamberg with similar results.

However, institute head Bernhard Richter warns: "Contrary to what was sometimes reported, we did not make any aerosol measurements" -- tiny particles that have the potential to circulate much further in a room.

The institute published updated guidelines this week that include limiting the number of people in the room and the length of rehearsals, staying two metres apart, keeping rooms ventilated, screening choir members and wearing masks.