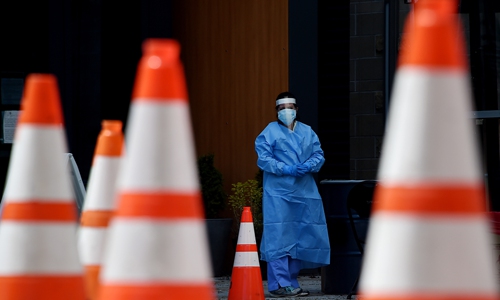 A healthcare worker waits for patients to be tested at a walk-in COVID-19 testing site on Tuesday inArlington, Virginia. US government epidemiologist Anthony Fauci admitted the true number killed by the epidemic in the US is likely higher than the official toll of more than 80,000 - the world's highest. (Photo: AFP)

As the US, which has reported the highest number of coronavirus infections for months, saw the number of COVID-19 deaths surpass 100,000 on Thursday, a Chinese data scientist predicted that the country may need another five to eight months to be free of new cases, as it is relaxing social distancing policies and interstate travel bans.

Chinese experts said the startling death toll reflected the US governance missteps, which have also worsened the crisis. The officials focused largely on pursuing short-term economic and political interests, while playing up human rights despite its disrespect for life.

Chinese experts who expertise in China-US relations noted that the US is a "loser" in the fight against the pandemic despite receiving an early warning and having advanced medical resources and technology.

Liang Manchun, an associate research fellow at the Institute for Public Safety Research of Tsinghua University, told the Global Times on Thursday that new cases in the US would drop gradually, and the country could be free of new cases in late September provided that strict anti-pandemic measures are adopted. But Liang warned that prediction may be inaccurate due to the complex and changing realities.

Liang also noted that the US is more likely to curb the contagion after five to eight months because it had prematurely lifted restrictions.

The resumption of work and production, increasing interstate population flows, governments' strength in imposing restrictions, and people's adherence to the home quarantine measures could affect the process, Liang said.

Despite the spreading virus, US President Donald Trump continues to pressure states to lift lockdown orders and return to work. Many states are on track to restart their economies and relax restrictions. Bars and barber shops reopened, and people flocked to beaches, US media reported.

More than 1,699,000 people have been affected in the country since the first COVID-19 case was reported in the US on January 21. The US now tops the world with the most confirmed cases and deaths, accounting for 30 percent and 28.5 percent, respectively, of the world's totals.

Experts concluded that the grim picture in the US is a direct result of the absolute incompetence of the Trump Administration in handling the epidemic, including the failure to make an overall response plan and their low respect for the expertise of US health scientists and professionals, such as top public health experts Anthony Fauci and Deborah Birx, whose advice to control the virus were often contradicted.

Tom Frieden, a former CDC director, referred to the US' fight against the epidemic without the involvement of the CDC in decision-making as fighting with one hand tied behind the back.

"The US has the most advanced medical technologies, information and intelligence, but it performed the worst as the US government is such an incapable commander in the pandemic fight," Shen Yi, director at the Research Center for Cyberspace Governance of Fudan University, who follows China-US relations, told the Global Times on Thursday.

He said the US should focus its attention on the pandemic and domestic situation, instead of shifting blame and intervening in the affairs of other countries.