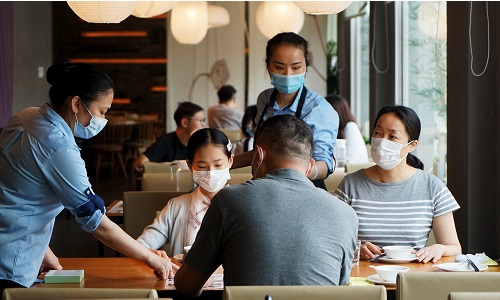 Customers order food in the Hubei cuisine restaurant run by Zhang Jiening, who is from Wuhan, in downtown Shanghai. (Photo: Global Times)

"The temper of Wuhan people is related to the local weather. It is burning hot in summer and freezing in winter. Those who can grow up in such a fiery environment are born with an optimistic attitude. I am such a person," Zhang Jiening, who is from Wuhan in Central China's Hubei Province, told the Global Times.

Zhang has been running a Hubei cuisine restaurant in Shanghai for a decade. The closure caused by the COVID-19 pandemic caused him losses of about 400,000 yuan ($55,941.71) in February and March, as his restaurant didn't resume business until April 1. "The loss is still ongoing. It won't get better unless the pandemic is well controlled overseas," Zhang said.

His barbecue restaurant in Wuhan went through an even worse situation. After a 76-day lockdown, Wuhan re-opened on April 8. The business, however, has only returned to 40 percent of the previous sales, and then experienced a plunge again when the city experienced a rebound of COVID-19 with six new confirmed cases reported at a residential complex from May 10 to 11.

Zhang had to suspend his plan to expand his business by opening three more restaurants in Wuhan.

For catering businesses, it is hard to find new ways to recover amid the coronavirus when people are worrying about potential infection risks caused by close contact.

Cheng Yelian, who is from Xianning in Hubei Province, owns three crayfish restaurants in Shanghai and has had to rent out one of her restaurants this year due to the lasting impact of COVID-19. Her business in April only recovered to 60 percent of the level of last year, and to 70 percent in May.

"I can see people now are more cautious in spending," she said.

The cost of spices that Cheng uses to cook crayfish has increased about 10 percent due to the pandemic, which has led to a drop in profits. To cut costs, Cheng only hired about half the number of staff as in previous years.

The peak season for crayfish restaurants lasts from April to June, during which Cheng usually has to earn the main profits for the year. "But by June this year, I am afraid we can't realize that target. We have to work harder in the second half of the year," she sighed.

However, the two restauranteurs still have an optimistic attitude toward their business and the economy of the country.

Zhang has spotted an opportunity to promote Hubei cuisine in Shanghai amid the coronavirus, despite the negative impact. "Previously, the image of Wuhan and Hubei was obscure in Shanghai, but now many of my Shanghai friends have told me they want to go to travel in Hubei and Wuhan, which was rare before," Zhang said.

He plans to do more promotions for Hubei cuisine and let people know more about Hubei, which is known as a "province with thousands of lakes" due to its rich water resources.

"I think our country is prospering with each passing day. There will be no problem if we can follow the general trend," Zhang said.

Cheng has also found opportunities in food delivery. The orders from her restaurants increased by 20 percent year-on-year amid the coronavirus, when more people chose to order food during the stay-at-home days.

"I also plan to introduce more new dishes and promote our barbecue more in winter," she added.

There have also been positive signals from the restaurant patrons. To Zhang's surprise, rather than discrimination or bias against Hubei People, his patrons in Shanghai have shown support and sympathy.

Before Cheng was able to reopen the restaurants on March 21, she was anxious about her business because of the overwhelming bad news about the pandemic. But when some of her old patrons called to ask when she would resume her business, she started to believe that the pandemic had not taken away people's demand for her food.

Her confidence soon returned when she reopened. "We had customers walk in as soon as we opened, even without doing any advertising," she said, adding that she won't give up her business.

She feels encouraged to see that her Hubei friends, who work in different sectors such as landscaping, real estate, foreign trade and finance, have an optimistic attitude toward business and life in the future.

"Everybody is waiting. The good days will finally come back and people's confidence in consumption will recover," she said.