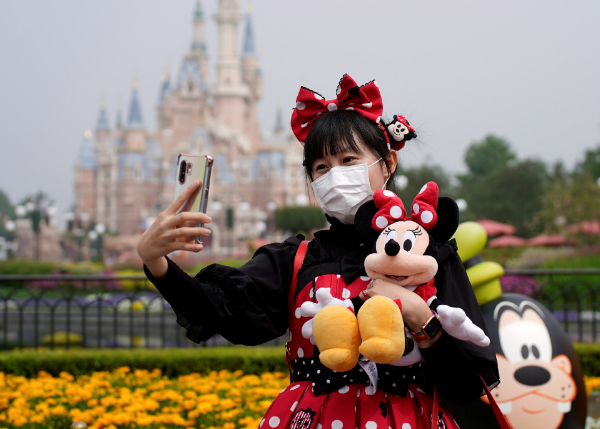 A visitor dressed as a Disney character takes a selfie while wearing a protective face mask at Shanghai Disney Resort as the Shanghai Disneyland theme park reopens following a shutdown due to the coronavirus disease (COVID-19) outbreak, in Shanghai, China May 11, 2020. (Photo: Agencies)

Florida officials have approved plans for a phased reopening of Walt Disney World in Orlando starting on July 11, according to a memo from a state agency released on Friday.

The successful reopening of its parks is a signal event for Disney and the rest of the world as governments and companies strategize how to move out of lockdown while the novel coranavirus is still a threat. The state also cleared Sea World Entertainment Inc to reopen on June 10, said Halsey Beshears, secretary of Florida's Department of Business and Professional Regulation, in a memo sent to officials in Orange County, Florida.

When the Disney parks reopen, guests and employees will be required to wear masks and undergo temperature checks. The resort will suspend parades, fireworks displays and other activities that create crowds.

Disney will encourage contactless payment systems and expand its existing mobile order systems in restaurants, it said on Wednesday. It plans to restrict the number of guests, who will be required to reserve their park passes ahead of time.

Starting in January, the media and entertainment giant closed theme parks around the world to help curb the spread of the novel coronavirus. The company had estimated it lost $1 billion at its theme parks division from January through March.

On Wednesday, Disney Chief Executive Officer Robert Chapek told CNBC the company currently has about 20,000 people per day visiting Shanghai Disneyland, which reopened on May 11 with mandatory masks, temperature screenings and social distancing for visitors and employees.