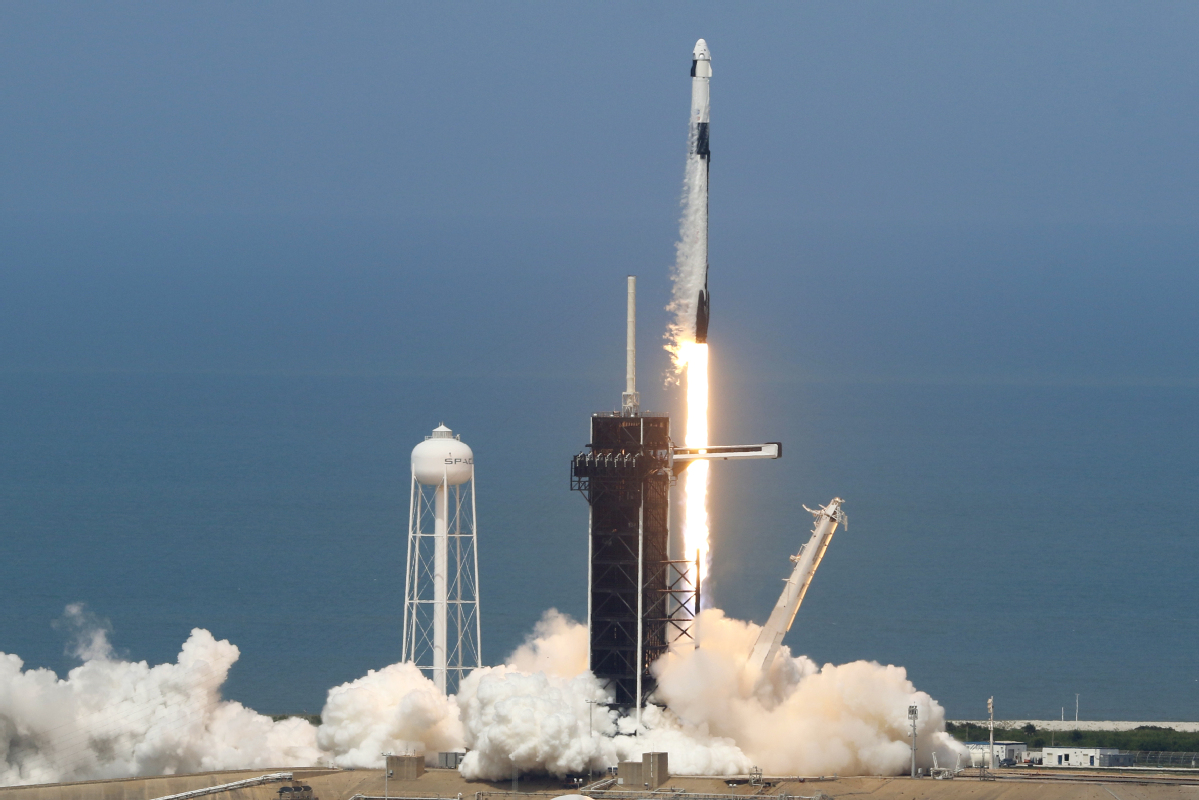 A rocket ship built by Elon Musk's SpaceX company thundered away from Earth with two US astronauts on Saturday, ushering in a new era in commercial space travel and putting the United States back in the business of launching astronauts into orbit from home soil for the first time in nearly a decade.

NASA's Doug Hurley and Bob Behnken rode skyward aboard a white and black, bullet-shaped Dragon capsule atop a Falcon 9 rocket, lifting off at 3:22 pm from the same launchpad used to send Apollo crews to the moon half a century ago.

"Let's light this candle," Hurley said just before ignition, borrowing the historic words used by Alan Shepard on the US first human spaceflight, in 1961.

Falcon 9's reusable first-stage booster successfully landed on the "Of Course I Still Love You" drone ship off the Florida coast.

The Crew Dragon reached Earth orbit about 12 minutes after takeoff and was making its way to the International Space Station, NASA said.

Behnken and Hurley will stay in the station for up to four months, and will splash down in the sea on their return, a space return the world has not witnessed since the 1970s.

In this still image taken from NASA TV before liftoff, NASA astronauts Bob Behnken (rear) and Doug Hurley are strapped in the SpaceX Crew Dragon capsule.

SpaceX became the first private company to launch humans into orbit, a feat achieved previously by only three governments: the US, Russia and China.

"This is something that should really get people, right in the heart of anyone who has any spirit of exploration," Musk, the visionary also behind the Tesla electric car company, said after liftoff, pounding his chest with his fist.

The flight also ended a nine-year launch drought for NASA. Since the final flight of NASA's space shuttle program in July 2011, the space agency has relied on Russian Soyuz rockets and spacecraft to get its astronauts to and from the space station. Since then, NASA, SpaceX and Boeing have worked for years to end that dependence.

In 2014 the two companies signed multibillion-dollar contracts with NASA's Commercial Crew Program to finish developing their astronaut taxis and fly six operational crewed missions to and from the orbiting laboratory.

NASA plans to rely in part on commercial partners as it pursues its next goals: sending astronauts back to the moon within a few years, and on to Mars in the 2030s.

Saturday's mission is technically considered a test flight. The next SpaceX voyage to the space station, set for the end of August, will have a full, four-person crew: three US citizens and one Japanese.

For SpaceX and the future of public-corporate space exploration, the stakes on Saturday were extraordinarily high.

With the spaceship finally on its way, Musk choked up and said the return to Earth is more dangerous in some ways than ascent, "so we don't want to declare victory yet".