Racism, bad governance hallmark of US 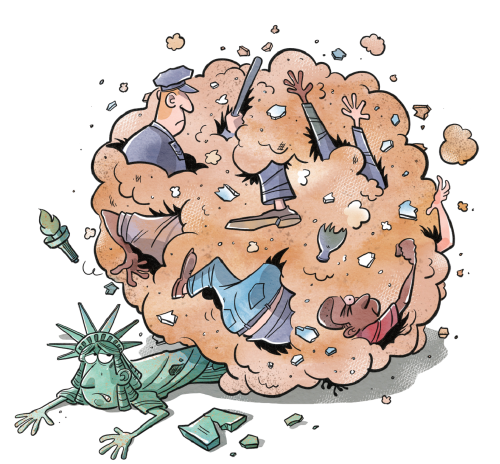 Just as we thought that things in the United States could not get any worse with more than 100,000 novel coronavirus deaths, the country is aflame and angry because of a spate of racist incidents, many committed by police officers who have rarely been punished for their crimes.

Racism in the US is as old as the country itself. Still, the horrific death of George Floyd, who was suspected of committing a petty crime and asphyxiated by a white Minneapolis policeman, has shocked the conscience of the US public and those in the rest of the world.

The US' colonial economy was largely reliant on African slave labor, and slaves were considered sub-human. Their sub-humanness was even written into the fabric of the US Constitution which was supposedly promulgated in an Age of Enlightenment in Article I wherein slaves were treated as three-fifths of a human being. The Civil War was fought over the issue of slavery, and the earlier provision was repealed only as a result of the 13th Amendment in 1865.

Discrimination, however, has lived on in exclusionary practices and in the hearts of too many men and women in the US. Ironically, the Republican Party was established in 1854 in opposition to slavery but is now led by a president who calls neo-Nazis "fine people" and who detests minority groups, except for the rich 1 percent, a group to which he belongs.

Racism was also evident in the treatment of Chinese workers who escaped the poverty of the Qing Dynasty (1644-1911) to seek a better life in the US during the California Gold Rush of the mid-19th century, and later did the backbreaking work to help build the transcontinental railway. Their reward: ferocious discrimination culminating in the discriminatory Page Act of 1875 which banned the immigration of Chinese women, the Chinese Exclusion Act of 1882 which prohibited the immigration of all Chinese laborers, and the Asiatic Barred Zone Act of 1917. These laws remained in force well into the 20th century.

Also, Native Americans were the victims of numerous wars, and of the treaties they were tricked or forced into signing. Their survivors were herded into reservations, and to this day they live in appalling conditions.

Despite the noble efforts of some, these and many other people continue to suffer from what the Washington-based think tank, Urban Institute, calls "structural racism". They have faced a wide range of overt and covert discrimination in critical areas such as education, employment, healthcare and housing, which makes it nearly impossible for all but a few to achieve the American Dream. As the US Human Rights Network put it, "discrimination in the United States permeates all aspects of life and extends to all communities of color". Racial hatred continues to be systemic even almost two and a half centuries after the US' founding.

Black people account for 2.4 times more COVID-19 deaths than whites. In Arizona, the Native American mortality rate is eight times as high as whites. Among all ethnic groups in the US, black people had a poverty rate of 20.8 percent and Native Americans 23.7 percent, with the percentage among whites being only 8.1 in 2018. The rate of imprisonment per 100,000 people in 2018 was 592 for black people, 401 for Native Americans and 157 for whites.

In contrast, China is on route to eradicating abject poverty and building a moderately prosperous society in all respects by the end of this year. It has already lifted about 800 million people out of poverty. Also, China has largely contained the novel coronavirus outbreak at home and resumed economic activity. In the US, however, the pandemic is yet to be contained thanks to insufficient testing and tracking and treatment. Worse, the US has withdrawn from the World Health Organization.

The US, after the killing of Floyd, seems to be on fire, and troops have been mobilized to subdue angry demonstrators. This is certainly not what the world expects to see in a country that is the world's sole superpower. But that sadly is the reality of the US.

The author is a senior fellow at the Center for China and Globalization. The views expressed are the writer's and don't reflect those of China Daily.