OPINIONS US becoming unrecognizable to Chinese as Washington lies, denies severity of virus

US becoming unrecognizable to Chinese as Washington lies, denies severity of virus 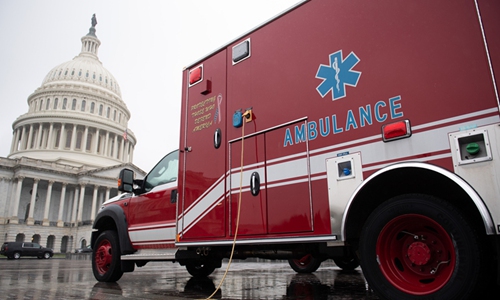 An ambulance sits outside the US Capitol in Washington, DC. (Photo: AFP)

There is no room for fraud in science. COVID-19 does not care whether you are a superpower or not. It's clear that the US government's policies of pushing ahead resumption of work and production without thinking of the outbreak is leading to new chaotic scenes, and the speed at which the outbreak has returned is alarming.

Dr. Robert Redfield, director of US CDC, estimated that the US now has 24 million people infected with COVID-19. The country's latest daily number of COVID-19 confirmed cases reached a new record of about 36,000 to 39,000, and the Washington Post reported that the country's death toll was as high as 2,500 on Thursday.

Even with these facts, the US government continues to downplay the virus. A wide range of officials, from the president to governors, have repeatedly denied the severity of the outbreak, saying the number of people being tested is to blame for the rise in confirmed cases. It's reasonable to want the economy to restart, but it is shameful for the country's government to deceive its people so much.

Faced with the "python" of COVID-19, instead of mobilizing its domestic services and leading the country to success, the US government has "danced" with it until the US became tightly entangled by it.

In fact, the US is becoming unrecognizable to many Chinese. Isn't the US a country with advanced science capabilities, democracy, and free press? How can the country's government repeatedly lie about the epidemic and not show empathy at the rising number of deaths? The fact is 124,000 people have already died in the US.

Even now, Washington's only strategy seems to be dumping its mistakes onto China and blaming China for all its problems. It's a shameless argument that has caught a lot of traction in the US, and such performance should have come from an ignorant country.

This will not bode well for the US. Texas, a state whose number of infections keep hitting a new high, was forced to declare it will be suspending its economic restart. It's obvious that more and more states will be forced to follow Texas's lead.

The US government wants to restore the country's economy, but the resumption of economic activities without effective preventive measures is bound to lead to a wild spread of the epidemic, and new problems for the economy to deal with. This vicious cycle will gradually consume the wealth that the US has accumulated over a long period of time.

Without seeking truth from facts, and instead making false claims, it won't work anywhere in the world.