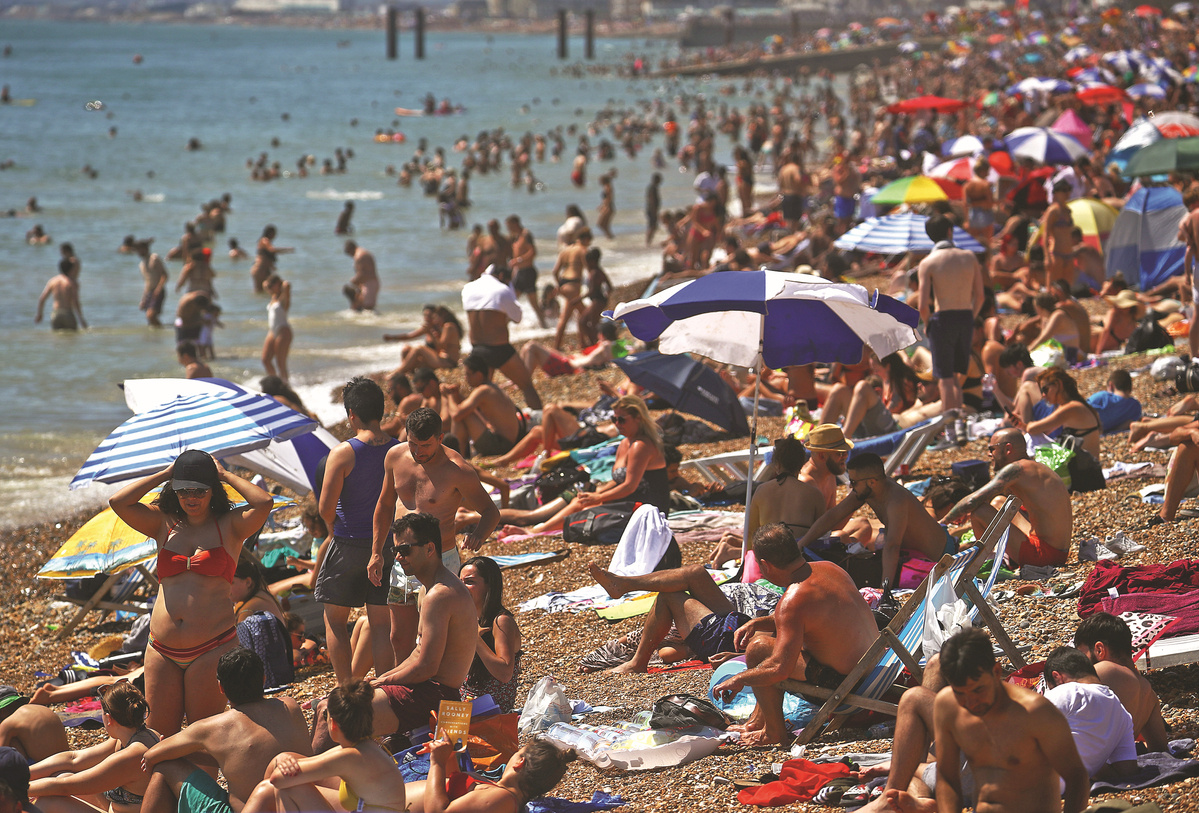 People enjoy the hot weather at the beach in Brighton, Britain, on Thursday. (Photo: Agencies)

Travelers from the US, Brazil, Russia could be prevented from entering EU

The United Kingdom has begun human trials of a new potential novel coronavirus vaccine with about 300 volunteers set to receive it over the coming weeks.

The trial is being led by Robin Shattock and his colleagues at Imperial College London and is among around 120 vaccine programs under way across the world.

The Imperial College vaccine is based on a new approach, using synthetic strands of genetic code, called RNA, which mimic the virus. Tests in animals suggest the vaccine is safe and triggers an effective immune response.

Shattock said: "We've been able to produce a vaccine from scratch and take it to human trials in just a few months.

"If our approach works and the vaccine provides effective protection against disease, it could revolutionise how we respond to disease outbreaks in future."

The BBC reported that 13 vaccines are now in clinical trials: five in China, three in the United States, two in the UK, and one each in Australia, Germany and Russia.

Europe has seen an increase in weekly cases of COVID-19 for the first time in months as restrictions imposed to curb the spread of the virus are eased, the World Health Organization, or WHO, has said.

In 11 countries, which have not been named, accelerated transmission has led to "very significant" resurgences, said Regional Director Hans Henri Kluge.

However, the WHO anticipated that the situation would calm down further in the majority of countries over the summer.

Diplomatic talks in Brussels will continue on Friday to plan the reopening of Europe's external borders on July 1.

European Union ambassadors are considering placing a number of countries on a safe list to restart flights with the EU — threatening tensions with some of the bloc's biggest global partners.

Travelers from the US, Brazil, Russia and Qatar could be among those prevented from entering the EU, according to the plans under discussion.

The pandemic continues to cause heavy damage to the employment market, as more European companies this week made moves to release staff after struggling with the downturn in business.

Airport ground handling company Swissport is planning to axe 4,556 jobs in the UK and Ireland — half its workforce — due to the impact of the novel coronavirus.

The UK's Royal Mail is to cut 2,000 management jobs, about one-fifth of its managers, as it struggles to deal with the effects of the crisis.

In a memo seen by Sky News, Swissport's chief executive, Jason Holt, said it had been "hit hard" by COVID-19 with revenues "almost completely lost".

Holt said: "The unfortunate fact is that there simply aren't enough aircraft flying for our business to continue running as it did before the COVID-19 outbreak, and there won't be again for some time to come. We must adapt to this new reality."

On a positive note, Britain's largest steelmaker, Tata Steel, is close to agreeing a rescue deal with the government, saving 8,000 jobs in a sector that was under pressure even before the lockdown.