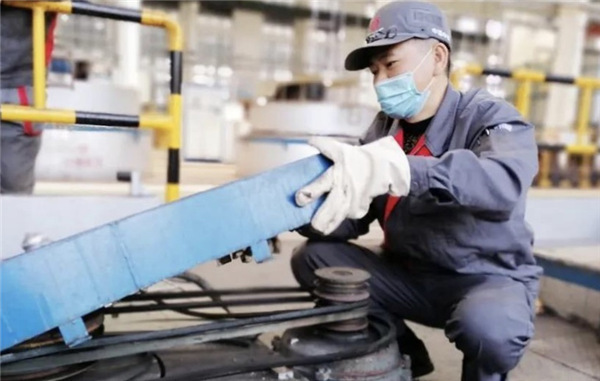 Building trains every day, Guo Wuchun in his 50s from Zhuzhou, Hunan province, was not satisfied. He wanted more. He wanted to reach for the sky. His dream was to build and fly a helicopter that he made. It finally came true after five years of research and development.

Video footage showing Guo's test flight in his coaxial helicopter has gone viral on Sina Weibo. It had been viewed more than 38 million times as of Monday. Many netizens call it an inspiring story that shows everything is possible as long as you dare to follow your dream and never give up.

"When I was a boy, I had dreamed of building a plane, but most people thought that it was an unobtainable dream for me, a middle school graduate," Guo says.

But his education background didn't stop him from realizing his dream. Without formal education and training, Guo figured out helicopter design on his own.

Working at the Zhuzhou CRRC Timly Forge Co has brought Guo a step closer and gave him the required craftsmanship. In the factory, he mastered skills such as gas-cutting and welding among others.

Guo started his helicopter project in 2015.

From the basics of helicopter aerodynamics to coaxial rotor systems, he has devoured the vast resources available in professional books and online. For the English materials that he cannot understand, he has asked friends to translate for him.

He has been a frequent visitor to various auto shows to look for motors which may suit his helicopter.

In his makeshift studio at his home's rooftop, he has collected scrap copper vehicle parts and other discarded metal for necessary components for his helicopter, which has been his "treasure". Piles of used tires and steel pipes have been stored in his studio.

His first model was created in 2015, but it could not take off. Eventually, after numerous failed attempts and four models, Guo got himself in the air this month, with some netizens calling him a "Chinese Wright brother".

With its tank full, the flight can last two hours, according to Guo. He didn't reveal how much he has spent on the project.

The CRRC saluted Guo on its Sina Weibo account, commenting that Guo challenged the impossible.

Many amateur aircraft enthusiasts, including Guo, face difficulties in getting a special airworthiness certificate in the experimental category. This certificate is issued by the Civil Aviation Administration of China allowing enthusiasts to legally operate aircraft for non-commercial purposes of recreation and education. 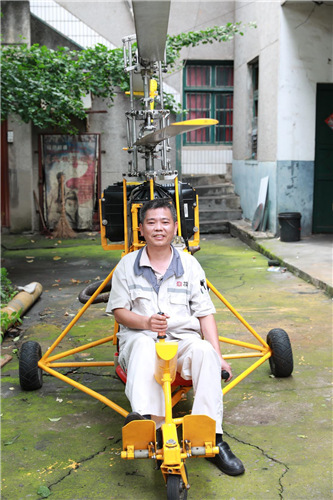 Guo on his self-made helicopter in his yard.

According to the Civil Aviation Administration of China News, amateur-built aircraft have been popular in recent years with tens of thousands of people creating their own.

In 2008, Chen Zhaorong, a farmer in Wenguang village, Guangdong province, was under the spotlight for his homemade helicopter. During a test flight in May that year, his engine stopped mid-flight. Luckily, he survived the crash, but police asked him to sign a document promising that he would not fly again.

Since China established general aviation as a strategic industry in 2016, a series of supporting policies have been issued to regulate the amateur-built aircraft market.

In May 2018, the administration added the special airworthiness certificate in experimental category to the Rules of Airworthiness Approval of Civil Aviation Products and Components.

An amateur-built aircraft is defined as one with the major portion fabricated and assembled by individuals who undertook the construction project on their own.

Late that year, Shen Benzhong in Yancheng, Jiangsu province, got the country's first airworthiness certificate in experimental category for his F27 helicopter.

"With the supporting policy for civil aviation in experimental category, these flying amateurs will be able to play an important role in the country's aviation sector," Mao added.