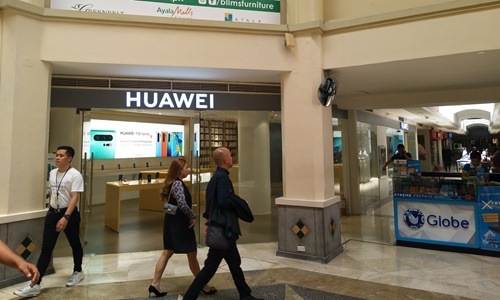 A Huawei store stands next to a Globe Telecom booth in Makati City, the Philippines on April 14, 2019. (Photo: cnsphoto)

Chinese tech giant Huawei said it "remains open to discussions with the government" and is "finding ways with customers to manage the proposed US restrictions so the UK can maintain its lead in 5G," after media reported the UK is set to phase out the use of Huawei in its 5G network this year.

"All our world-leading products and solutions use technology and components over which the UK government has strict oversight. Our technology is already extensively used in 5G networks across the country and has helped connect people throughout lockdown," Victor Zhang, Huawei's vice president, said in a statement sent to the Global Times on Monday.

"We believe it is too early to determine the impact of the proposed restrictions, which are not about security, but about market position," said Zhang.

British Prime Minister Boris Johnson is expected to begin phasing out the use of Chinese tech giant Huawei's technology in the UK's 5G network as soon as this year, the Daily Telegraph reported on Saturday.

Officials are drawing up proposals to stop installing new Huawei equipment in the country's 5G network in as little as six months, and to speed up the removal of technology that is already in place, according to the newspaper.

The UK decided in January to let Huawei continue its role in the country's 5G network, but with restrictions. The company was excluded from providing "core" 5G gear, despite pressure from the US to crack down on the Chinese firm.

It wouldn't be smart for the UK to reverse its policy on Huawei as the nation can't afford the implications, from the industrial impact to the harm done to mutual trust in China-UK ties, veteran industry analyst Ma Jihua told the Global Times on Monday.

China and Europe have long been conducting close cooperation in telecommunications so the two could establish their places in the industry, and the UK and other European countries should think twice before choosing to give up Europe's 5G lead due to US disruption, Ma said.

The head of the French cybersecurity agency ANSSI said there would not be a total ban on the use of equipment from Huawei in the rollout of the French 5G telecoms network, but that it was pushing French telcos to avoid switching to the Chinese company, according to a Reuters report on Monday.