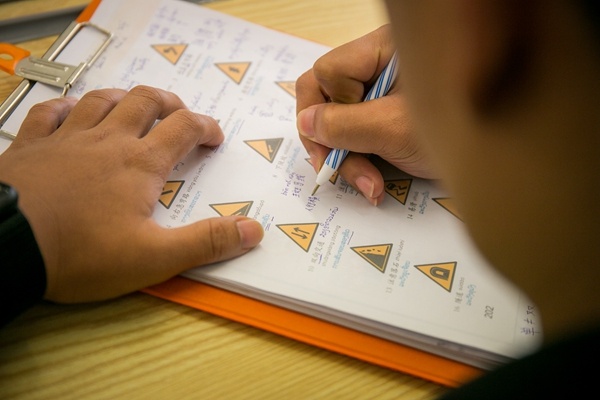 A student of the first group of Laotian trainees for the China-Laos railway takes notes in Chinese and pinyin while learning traffic signs.(Photo: Xinhua)

The first group of trainees for the China-Laos railway have been undergoing intensive Chinese language and professional railway theory training since mid-July in the Laotian capital Vientiane.

Somphone Inleuangsy from the hilly Luang Namtha province of northern Laos says that she wanted to be one of the first female train drivers for the country's first modernized railway.

"I've always been interested in railways and I think women can work in this field too, so I decided to apply for this job," says Somphone, 23.

She learned Chinese before, but this time she has to learn railway terminology. "There are so many technical words and they are not easy to understand. This training is important to me," she adds.

Somphone says the railway is an exciting place to work and provides real benefits and a great opportunity.

A total of 233 hopefuls are receiving training at the Confucius Institute at the National University of Laos. They are learning to be train drivers, engine mechanics, train operators and railway maintenance supervisors. They were selected by the Laos-China Railway Co Ltd, a joint venture based in Vientiane.

Somphone says the job is important to her and through it she can fulfill her dream and take care of her family.

A total of 233 trainees study on Chinese language and railway theory at the Confucius Institute at the National University of Laos on July 15.

"I feel grateful that I was selected in the first group, and I'm glad to be a part of efforts to help improve the country," she adds.

Another trainee, Somboun Tualavong, 24, from Xieng Khuang province on the central Laos plateau, says he is proud to get this opportunity and is excited to be a part of the railway.

He adds that working for the railway isn't just a job but a chance to have a brighter future.

"I am working hard to become a qualified member of staff," he says, adding that the well-paid job can improve his livelihood and meet his family's needs.

"Another reason that I want to work here is that the company offers the necessary support and training, so I can always improve my skills," he says.

The ongoing intensive Chinese language class will last for 10 weeks at the Confucius Institute, and the follow-up selection of the second and third groups of 600 trainees has started, which is expected to be completed in July.

"We are learning new words, mostly technical words and railway theory. It's hard to understand but I am willing to learn new things," says Somboun.

The professional railway training is useful and it is even better when the trainees can learn from Chinese teachers, Somboun says.

Qin Yanhong, a Chinese teacher with the Confucius Institute, says that she and her colleagues try to not only improve the trainees' language level, but also equip them with professional railway knowledge.

Despite difficulties, "we are trying to make the start a success", says Qin, adding that the railway is a link between the two countries and a good start is important.

Yonvilay Xayyalerd, director of the Confucius Institute at the National University of Laos, encouraged trainees to study hard.

The China-Laos railway is a strategic docking project between the China-proposed Belt and Road Initiative and the Laos' strategy to convert from a landlocked country to a land-linked hub.

The 422-kilometer railway, with 198 km of tunnels and 62 km of bridges, will run from the Boten border gate in northern Laos, bordering China, to Vientiane with an operating speed of 160 km per hour.

The electrified passenger and cargo railway is being built with the full application of Chinese management and technical standards. Construction started in December 2016 and is scheduled to be completed and operational by December 2021.