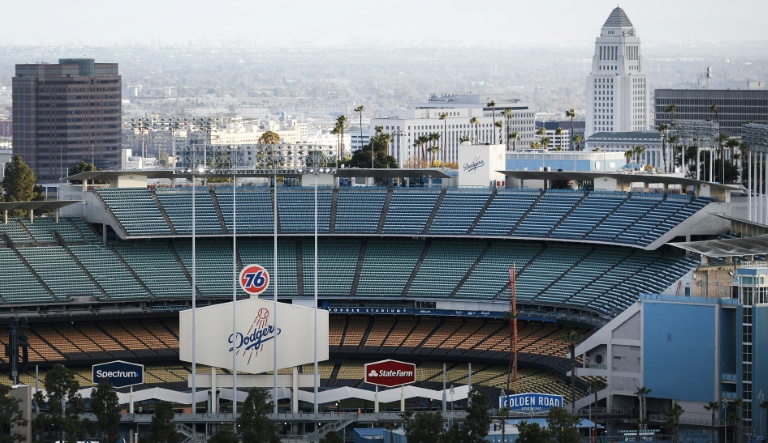 Dodger Stadium in Los Angeles remains empty with Major League Baseball shut down for the coronavirus, and most Americans in a new poll say they would be reluctant to attend future sports events until a vaccine is developed. (Photo: AFP)

A large majority of Americans would be reluctant to attend future sporting events unless a vaccine for the coronavirus is developed, a survey by Seton Hall University has found.

With every major sport across North America in shutdown for the past month since the COVID-19 crisis erupted, professional leagues are already exploring the practicalities of how and when competition may resume.

But the results of the Seton Hall Sports Poll revealed deep unease among Americans about returning to stadiums before a vaccine had been developed.

"This virus has the attention and respect of the nation," said Rick Gentile, director of the Seton Hall Sports Poll, which is sponsored by the Sharkey Institute within the Stillman School of Business.

"Those who identify as sports fans, at all levels of interest, line up closely with the general population in regard to their own safety and that of the players."

While 40% of those surveyed believed no sports should be played through the remainder of 2020, some 76% said they would have the same level of interest if competitions resumed and were broadcast with no spectators present.

Meanwhile, the survey revealed support for the decisions of professional sports leagues in the timing of their shutdown.

Some 76% percent said the shutdown came at the right time.

The United States has more COVID-19 cases than any other country, with more than 473,000 infections and over 17,800 fatalities.

The National Basketball Association, National Hockey League and Major League Soccer all suspended their respective seasons in mid-March while Major League Baseball also postponed the start of the 2020 season.

Golf, tennis, combat sports and motor racing have also been suspended because of the coronavirus.

US President Donald Trump said on Saturday he hoped sports would resume "sooner rather than later" following a call with league commissioners but regional authorities have cast doubt on a swift reopening of stadiums.

"I want fans back in the arenas... whenever we're ready," Trump said.

However, California Governor Gavin Newsom, whose state is home to more than a dozen baseball, soccer, basketball, ice hockey, and NFL teams, doubted stadiums would be open by September.

"I'm not anticipating that happening in this state," Newsom said.