Athletes go it alone in Tokyo as families watch from afar

Michael Phelps reached for his mother's hand through a chainlink fence near the pool. The 19-year-old swimmer had just won his first Olympic medal — gold, of course — at the 2004 Athens Games, and he wanted to share it with the woman who raised him on her own. 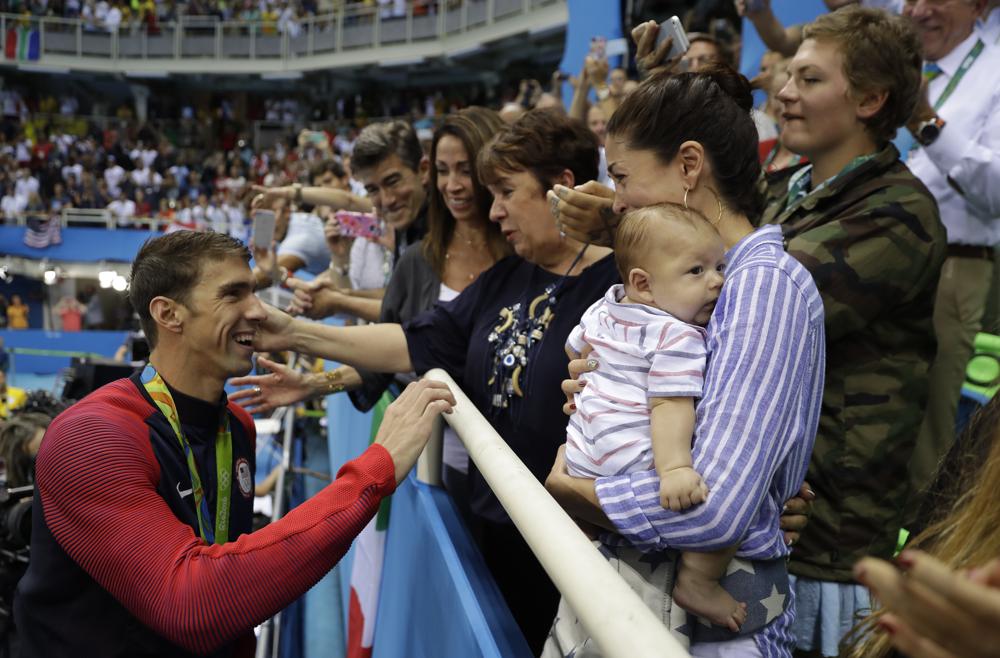 That kind of moment between loved ones won't be happening at the pandemic-delayed Tokyo Olympics.

No spectators — local or foreign — will be allowed at the vast majority of venues, where athletes will hang medals around their own necks to protect against spreading the coronavirus. No handshakes or hugs on the podium, either.

"I like to feed off of the crowd," defending all-around champion gymnast Simone Biles said, "so I'm a little bit worried about how I'll do under those circumstances."

Catching sight of familiar faces during competition can bolster an athlete on a big stage. It helped Matthew Centrowitz at the U.S. track trials, where fans were allowed.

"Seeing my family in the crowd and hearing them gave me a little sense of comfort, and what I needed to hear and see to calm my nerves a little bit," said Centrowitz, the defending Olympic 1,500-meter champion.

The youngest athlete on the U.S. team in Tokyo calls it "weird" that her family won't be in the stands.

"They're usually at all my meets," said Katie Grimes, a 15-year-old swimmer from Las Vegas.

Katie Hoff was the same age as Grimes when she was the youngest member of the U.S. team in Athens. Nerves got to her in her first event, and Hoff hyperventilated and vomited on the pool deck.

"I hope us older swimmers can show them the ropes a little bit and create that family environment," three-time Olympian Katie Ledecky said. "We will make sure we stay in touch with our families and keep them connected to what we're doing."

The decision to prohibit fans was made for health and safety concerns. The Games will be held during a state of emergency in Tokyo, with rising coronavirus infections in a country where 16.8% of the population is fully vaccinated. Variant strains of the coronavirus are emerging around the world, too.

Those reaction shots of excited, shocked or crying family members in the stands? Forget it. Singing, chanting and cheering among flag-waving fans at the venues? TV producers will have to look elsewhere. Phelps' son, Boomer, who was 3 months old at the time, became an adorable sight at the Olympic pool in 2016. No kids allowed this time.

The people who raised them, comforted them, financed them, and encouraged them through injury and defeat will have to be content to keep up with their athletes through calls, texts and video chats, when they're not watching the competition on various devices.

"She said, 'On TV, I can see it better anyway,'" Dutch swimmer Kira Toussaint said of her mother, Jolanda de Rover, a gold medalist swimmer at the 1984 Olympics.

Building support and camaraderie among athletes who usually compete individually has taken on new importance for coaches during the pandemic. They're turning to veterans to inform and reassure younger first-timers.

"We're going to have to rely on each other a lot more than we would have to if our loved ones were able to come to Tokyo to watch," said Lindsay Mintenko, national team director for the American swimmers. "The bond might be stronger because we don't have that outlet."

American high jumper Vashti Cunningham will have her coach, Randall Cunningham, who is also her father, on hand. But she'll be missing the rest of the family.

"It just feels good to go and eat with them, for them to be at the Bible studies with me, just everything, going to the stores," she said. "But it doesn't really matter to me if there are fans or not. I'm just really excited to go out there and jump. I do wish that our families could come and watch, though."

American discus thrower Mason Finley is prepared to hunker down at the athletes village with his Nintendo Switch for endless gaming while his pregnant wife and two dogs wait at home.

"I'm just going to kind of nest in there and stay entertained," he said.

"I will be home watching gymnastics by myself," she said. "I just get too nervous."

The family of swimmer Chad le Clos is flying to the United States to watch on TV because the competition will air at 3 a.m. in their native South Africa.

"It must be terrible to watch me at 3 in the morning," Le Clos said. "Then what do you do afterwards?"

Caeleb Dressel, the world's dominant male swimmer, barely gets to see, let alone spend time with his wife and family at major meets.

"It's not something I'm dependent on," he said. "I know they will be back home and you can feel that energy, and I can text or FaceTime whenever I need to."

Nellie Biles and her husband run a gymnastics training center in Spring, Texas, so she knows about COVID-19 protocols and restrictions. Still, she thinks having spectators in the 12,000-seat venue in Tokyo would have worked.

"We could social distance and not see each other. That's how huge their complex is, their venues are," she said. "It's hard for me to understand that they cannot make accommodations. Of course, that's just me being selfish. This will be one gymnastics event that I will never forget because I will not be present."