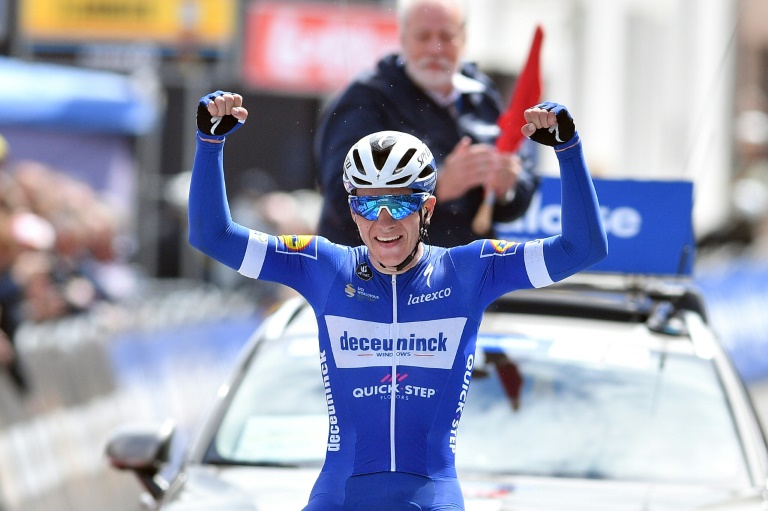 Remco Evenepoel at the 2019 Tour of Belgium. (Photo: AFP)

Cycling's latest whizz-kid Remco Evenepoel will make his Grand Tour debut as one of the youngest ever starters of the Giro d'Italia in May, his team Deceuninck announced on Friday.

There are three individual time trials on the 2020 Giro and Evenepoel, who turns 20 later this month, is a European champion and world silver medallist in the discipline, making him a potential contender.

"I'll just see how I do each day over the three weeks and have fun and hope the weather is good," Evenepoel said in a video release.

In an interview with Italian daily Gazzetta Dello Sport, Evenepoel said he relished the chanced to wear the overall leader's pink jersey after the first stage in Budapest, which is a time-trial.

"I'm good at time-trials, although it's under 10 kilometres and I'm better at longer distances. I'll prepare myself to give everything and whatever happens, happens," he said.

In 2019, Colombian prodigy Egan Bernal won the Tour de France as the youngest man in the race at age 21, while at the Vuelta an Espana Slovenia's Tadej Pogacar came third aged just 20.

The youngest Giro winner was the great Fausto Coppi, who won at 20 years eight months and 20 days in 1940, Evenepoel would be younger if he triumphs this year.

The charismatic former Anderlecht and PSV Eindhoven youth-team footballer was voted Belgian sportsperson of the year in 2019 after setting pulses racing by winning the Tour of Belgium and the San Sebastian classic two years after his conversion to road racing.

Asked by the Gazzetta whether he wanted to become the best rider of his generation, confident Evenepoel replied: "Sure, why not?"

"It will be difficult, and will mean winning lots and winning well," he added. "Maybe in 15 years we'll meet again and see if that's how it turned out."

Evenepoel's early career prowess has led to him being compared to countryman Eddy Merckx, widely considered to be the best ever road cyclist, but the youngster is not impressed by attempts to liken him to "the Cannibal".

"I don't like comparisons with Merckx or any other rider because we're talking about different eras, so it doesn't make any sense," he said.