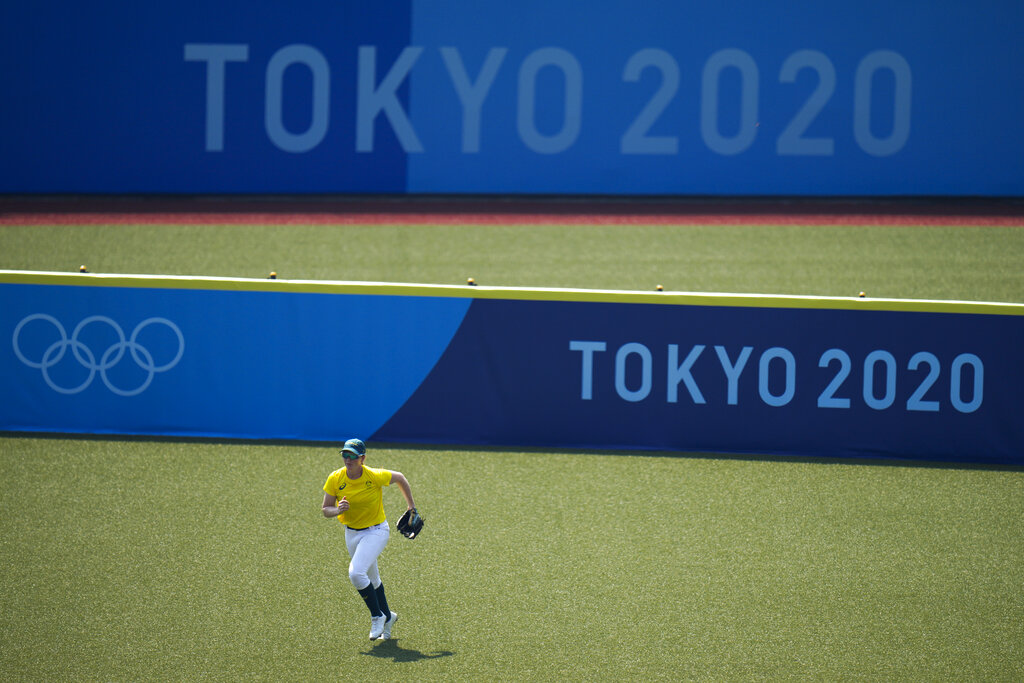 An Australian softball player chases the ball during a training session at the Azuma Baseball Stadium ahead of the 2020 Summer Olympics, Tuesday, July 20, 2021, in Fukushima, Japan. (Photo: AP)

ROME, July 19 (Xinhua) -- With the largest team in its history competing at Tokyo 2020, Italy aim to exceed its results at the previous Olympic Games, according to the country's National Olympic Committee (CONI) president.

In a recent interview with Xinhua, Giovanni Malago highlighted that the large number of Italian athletes at the upcoming Games was something the country was very pleased of, because - in this case - quantity would also mean quality.

"Italy will take part in the Games with 384 athletes overall, which is a record number for us," Malago explained.

"This is especially true for our female athletes, who make up 48.3 percent of the entire Italian team. It is something we are very proud of."

In Italy, as in many other countries, Malago acknowledged the pandemic has affected athletes' lives and chances to train since the first outbreak here in February 2020.

Yet, "with a thousand precautions and obstacles to overcome", Italian health and sports authorities agreed on specific protocols exempting a certain number of athletes from general anti-pandemic rules, even in the two-month full lockdown in spring 2020.

Asked about Italy's targets at the upcoming Tokyo Olympic Games, Malago said the goal was "to do better than last editions."

"This means to win more than 30 medals in Tokyo, and one crucial point in this perspective will be how many gold medals we are going to win," he said.

As for the 2022 Beijing Winter Olympics, Malago explained the Italian team would try to win more than the three gold medals it earned in PyeongChang in 2018.

"These goals will not be easy to reach, but I think we have put ourselves in a condition to achieve it, and I'm very optimistic," he said.

Malago talked up the cooperation between China and Italy in an Olympic context, as Beijing 2022 will be followed by the Milan-Cortina Winter Games in 2026.

"Lately, we held a video conference coordinated by the International Olympic Committee on the handover ceremony, the passage of the flag from the Beijing 2022 organizing committee to that of Milan-Cortina 2026, and this is a meaningful signal," the CONI chief explained.

The two countries would only benefit from each other's collaboration, according to Malago.

"I say this because the Chinese [sports] world and market are irreplaceable for us in terms of size, history and for the upcoming Winter Games," he stressed.

"On the Italian side, I do believe our country's image, history, and tradition is something China could pay attention to."

If these cooperation efforts succeeded, he noted, the passage between Beijing 2022 and Milan-Cortina 2026 could bring about a "big wave" in terms of athletic performances, audience, sponsors, and industries involved in winter disciplines.