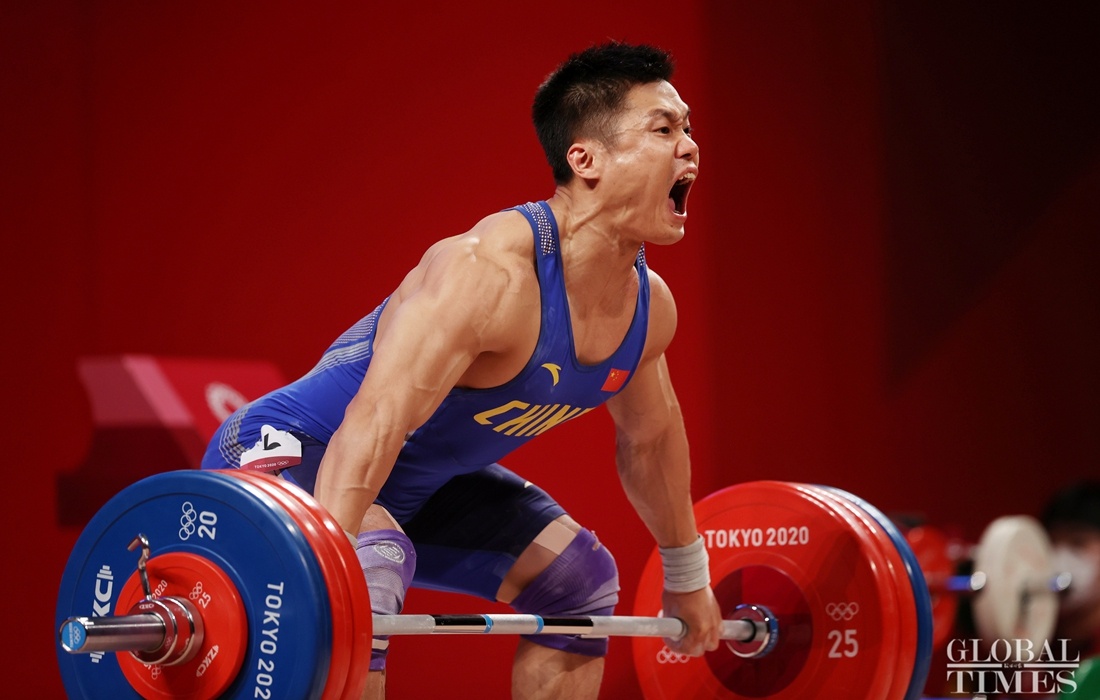 China's 37-year-old Lü XIaojun has broken the Olympics record and bagged gold in the men's 81kg weightlifting. This is the second gold on Sat for China and its 21st in total.(Photo: Global Times)

Though the Tokyo Olympic Games draw to a close on Sunday, the sidelights of the competition have aroused public interest, including athletes' outfits and the technologies that were used to help athletes train and compete in accordance to Olympic rules.

The shoes and sportswear of men's 81 kilograms weightlifting gold medalist Lü Xiaojun was one item of hot discussion. All of them are supplied by China's sport brand Anta.

Leveraging multiple technologies, the sneakers are stress resistant to more than one ton of weight, equivalent to the weight of 14 adults, and are shock resistant. The sole uses super wear-resisting fiber, which is 2.5 times more resistant of common material, bringing extremely strong ground grasping performance, according to Anta's official WeChat account.

The unique waist support system developed by Anta is applied in the weightlifting uniform, and can greatly improve the support force of the waist and prevent muscle injury caused by excess weight, said Anta.

Meanwhile, gymnastic and trampoline competition suits created by Anta adopt 3D cutting to fit the human body in all directions to avoid the influence of wind resistance in high-intensity air movements.

Apart from Anta, other Chinese brands also showcased their technologies and products at the Olympic Games this year. Alibaba Group's cloud solutions supported the global broadcasting of the games for the first time. The use of the cloud services significantly improved operational efficiency by reducing the necessary area of the international broadcast center by 25 percent and the onsite staff by 27 percent.

Another robotic coaching system Pangbot M-ONE for table tennis, which debuted in April 2020, can help adjust the speed and spin of the ball for different players, while producing and analyzing players' practice data to help improve performance. It was co-developed by China Table Tennis College of Shanghai University of Sport and Siasun Robot &Automation Co.

Aerospace technologies was also used in the training of athletes, including data measurement and analysis equipment used in swimming training and low-speed wind tunnels transformed into training hub for rowing projects.