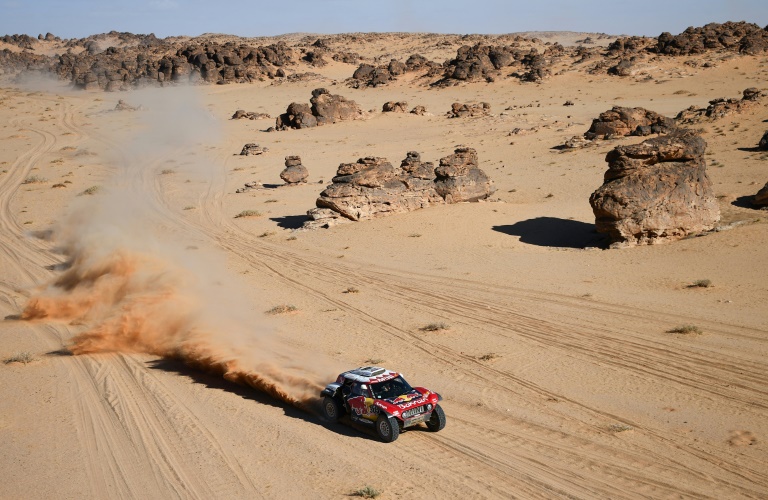 The Dakar Rally has come under fire from environmentalists. (Photo: AFP)

The images of cars, motorbikes and trucks careering through the sands of the Saudi desert are wonderfully dramatic but the shadow of climate change is lengthening across the Dakar Rally.

For 42 years this convoy of gas-guzzling vehicles has billowed exhaust fumes across the sands of Africa, South America and now Saudi Arabia, incurring the wrath of the environmentalists.

In response, the rally is taking its first baby steps towards a more climate friendly race.

For Anne Lassman-Trappier, mobility manager of the France nature environment association (FNE), the Dakar is "way off beam".

"It still interests some people but it's no longer in step with history," she says.

The penny appears to have dropped with the rally organisers who are displaying their desire to go green.

"When you have a motor sport, you know very well that you are not in tune with the times," admits David Castera, the new boss of the Dakar.

"We have 350 vehicles that drive every day which obviously says something but we are working on it," he said.

For several years, the race has implemented a carbon offset programme in the Amazon.

The rally also serves as a laboratory for the development of new vehicles.

In 2017, a 100 percent electric car managed to finish the race after two failures in previous years.

The car sponsored by Acciona, the Spanish renewable energy and construction giant, completed the rally in 52nd place, 82 hours 31 minutes 48seconds behind the winner, Stephane Peterhansel.

It was not an ideal advertisement for electric racing but it was a good start.

This year, a hybrid truck is making its competitive debut. After five stages, the crew of team Riwald were second to last.

Again, it is at least an indication that hybrids can survive the conditions.

"The electric system is only charged while driving, so there is no need for a generator or charger," says Dutch driver Gert Huzink.

The vehicle "is simply refuelled by the internal process of the truck".

On the sidelines, an electric SUV is also carrying out tests, with experienced nine-time Dakar driver Guerlain Chicherit at the wheel.

"Today, we are facing certain realities and motor sport must evolve," said the Frenchman.

"You have to accept that things change and live with the times."

"In motorsport, there is a bit of a fantasy around noise. But after driving a week in the desert in a car that makes no noise, I can tell you that it is much better."

The team overseeing the experiment aims to enter competition next year.

Their big problem in a race where stages are often 600 kilometres or more is that a battery will only run for 50km before it needs recharging.

"We are realistic. But we have to start by doing it in 2021. We are going to be the guinea pig, I am aware of that and I am ready to do it. It makes the project more exciting."

One day the Dakar Rally might have to go 100 per cent electric.

"It's going to happen, I am sure of it", says Theophile Cousin, the engineer behind the electric SUV.

For Lassman-Trappier, this reshaping of the machines could give new meaning to the race.

"If we change the type of race completely to one which favours vehicles without fossil fuel and run in the desert, that makes a lot more sense," she said.

The call certainly appears to have been heard in the organisers' office where plans are afoot to stage "within two years" a new truck category which would be 100 percent hybrid.

The whispers across the sands also suggest that there may be a new category for electric cars.