OLYMPICS Djokovic says he will play Tokyo Olympics 'with much pride'

Djokovic says he will play Tokyo Olympics 'with much pride'

World No. 1 Novak Djokovic said on Thursday he will play at the Tokyo Olympics, giving him the opportunity to achieve the first calendar Golden Slam by a male player.

"I booked my flight for Tokyo and will proudly be joining #TeamSerbia for the Olympics," tweeted Djokovic in English.

"With much pride I'm packing for Tokyo and joining our national team in the fight for the brightest medals at the Olympic arenas," he then tweeted in Serbian.

"For me playing for Serbia was always a special joy and motivation and I will give my best to make us all happy. Let's go."

The 34-year-old has already won the Australian Open, French Open and Wimbledon titles this year.

He needs Olympic gold and then the US Open to become the first man to capture the Golden Grand Slam.

The calendar Golden Slam has only ever been achieved once in the women's game when Steffi Graf swept the board of all four majors and Olympic gold at Seoul in 1988.

Djokovic's path to potential gold in Tokyo had already been eased by the decision of rivals Roger Federer and Rafael Nadal to skip the tournament.

US Open champion Dominic Thiem is also an absentee. 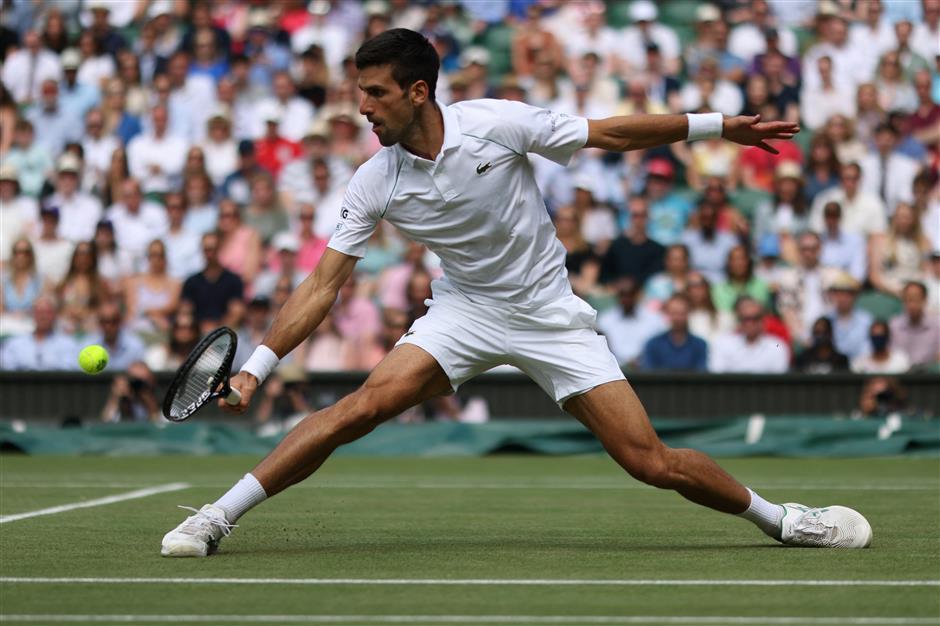 In this file photo taken on July 11, 2021, Serbia's Novak Djokovic returns to Italy's Matteo Berrettini during their men's singles final match on the 13th day of the 2021 Wimbledon Championships at The All England Tennis Club in Wimbledon, southwest London.

Djokovic won a bronze medal in singles at the 2008 Olympics in Beijing where he was defeated by Nadal in the semifinal before beating James Blake of the United States for third place.

At London in 2012, he carried Serbia's flag at the opening ceremony but was again a semifinal loser at the hands of Andy Murray.

He was defeated by Juan Martin del Potro in the bronze medal match.

Djokovic's announcement on Thursday came just four days after he had cast doubt on his participation at the Games.

Having defeated Matteo Berrettini for a sixth Wimbledon title and 20th career Grand Slam crown on Sunday, Djokovic admitted he had cooled on making the trip, saying it was only "50/50" if he would participate.

"As I said, my plan was always to go to the Olympic Games. But right now I'm a little bit divided. It's kind of 50/50 because of what I heard in the last couple of days," said Djokovic.

The Serb had always insisted he would think twice if the COVID-19 protocols in Japan became too strict and if fans were banned.

All venues at the Games, which start on July 23, will be closed to spectators as the Japanese authorities look to limit the risks of COVID-19.