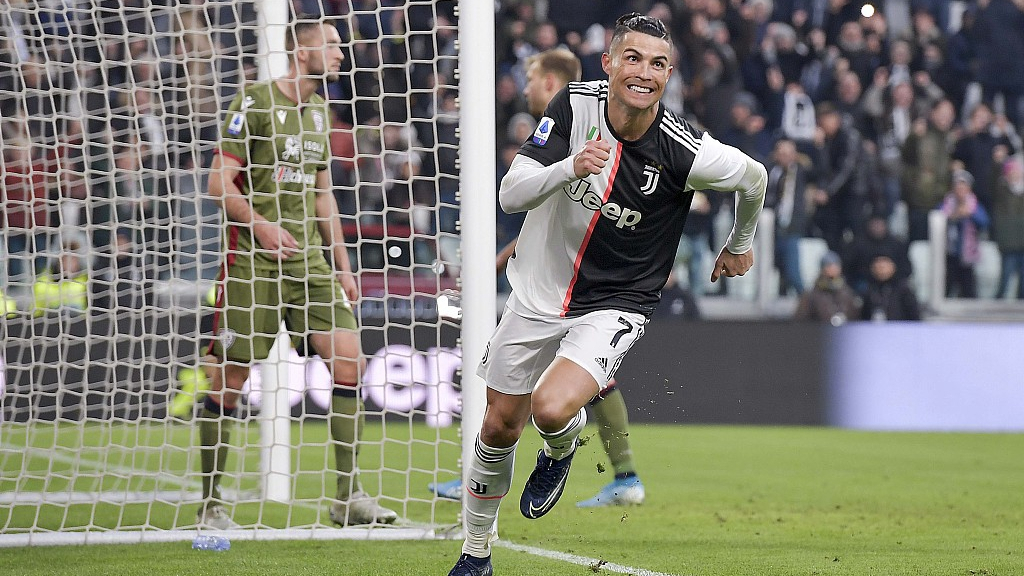 Cristiano Ronaldo of Juventus celebrates after scoring a hat-trick during their Serie A clash with Cagliari at Allianz Stadium, January 6, 2020. (Photos: CGTN)

Romelu Lukaku scored twice as Inter Milan held on to top spot in Serie A on Monday with a 3-1 win over Napoli to keep the pressure on Juventus who earlier swept past Cagliari with Cristiano Ronaldo netting his first hat-trick in the Italian top flight.

Antonio Conte's Inter ended their 23-year wait for a league win in Naples to stay in pole position, level on points with Juventus after 18 games, but ahead on goal difference.

Lazio are third, six points adrift but with a game in hand, after stretching their winning run in the league to nine matches on Sunday with a 2-1 victory over Brescia.

Meret fumbled another Lukaku strike into the net in the 33rd minute as the Belgian took his tally to 14 league goals this season.

Polish striker Arkadiusz Milik pulled a goal back for eighth-placed Napoli four minutes before the break.

But Lautaro Martinez added the third after the hour mark, following another mix-up in the Napoli defense, to give Inter their first win at the Stadio San Paolo since October 1997. 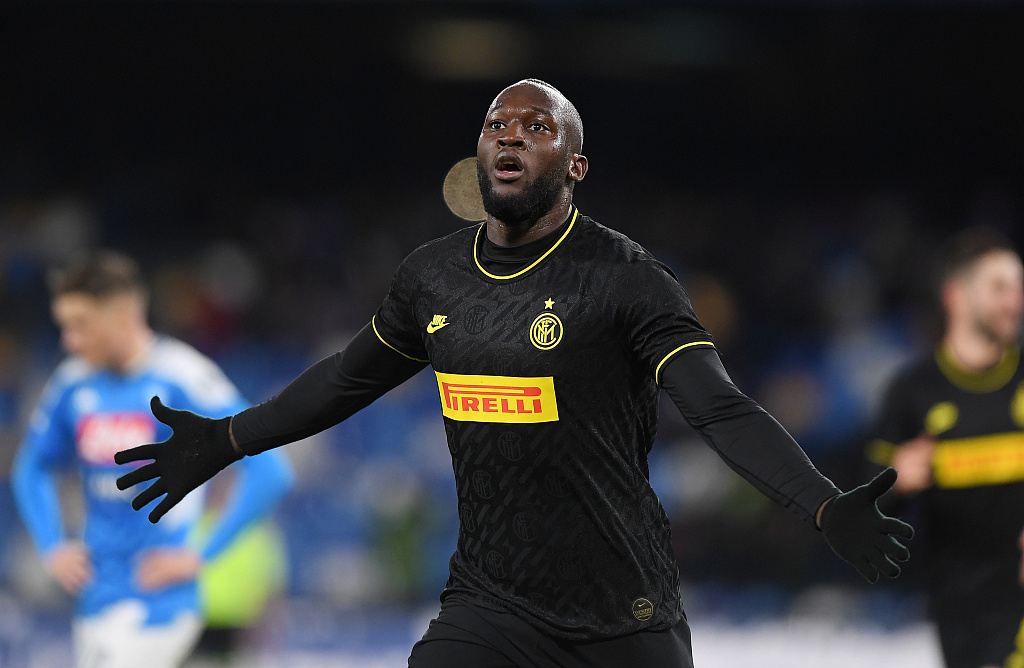 Romelu Lukaku celebrates scoring their second goal during their Serie A clash with Napoli at Stadio San Paolo, January 6, 2020.

In Turin, Ronaldo struck for the fifth consecutive league game as the champions bounced back from their Italian Super Cup defeat to Lazio.

"I'm happy with this first (league) hat-trick. But the important thing is the team, which played very well," said Ronaldo, who brought his league tally to 13 goals in 15 games this season.

Cagliari held off Maurizio Sarri's Juve early on, but the second half was all one-way traffic with 34-year-old Ronaldo breaking the deadlock just after the interval.

The Portuguese striker added a second from the penalty spot on 67 minutes then set up Gonzalo Higuain who came off the bench to strike a third nine minutes from time, before completing his hat-trick a minute later.

Lukaku and Ronaldo's goals overshadowed Zlatan Ibrahimovic's return for AC Milan as the Swedish star came off the bench in the 55th minute against Sampdoria.

The 38-year-old had not played since leaving MLS side LA Galaxy in October.

He came on for Poland striker Krzysztof Piatek to deafening applause from the San Siro crowd after rejoining the club last week.

But there was little else to cheer for the hosts who extended their winless run to three games and remain 12th in the table. 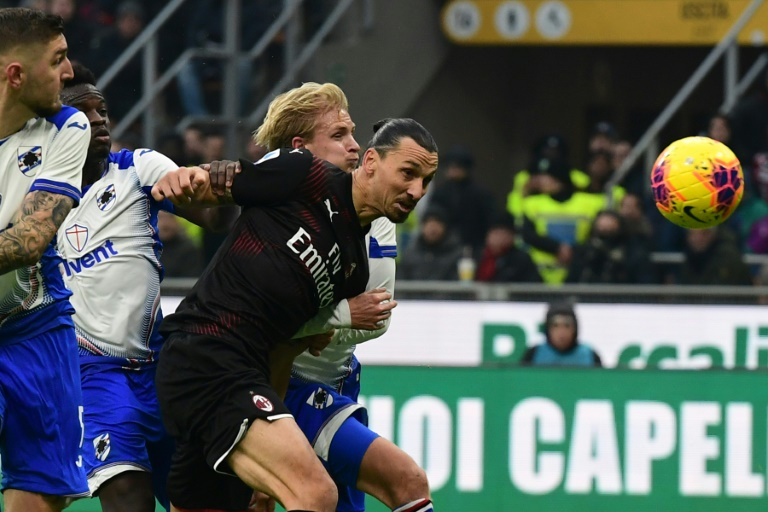 Zlatan Ibrahimovic goes for a header in his first match back for AC Milan against Sampdoria, January 6, 2020.

"I felt a lot of adrenaline, emotion, it brought me back nine or 10 years," said Ibrahimovic, who was top scorer in Serie A with Milan in the 2011-12 campaign before leaving for Paris Saint-Germain.

"I wanted to get on the pitch, score a goal and then celebrate like a God in front of the Curva! But it will happen next time."

The seven-time European champions are 13 points off Champions League qualification, a competition they have not played since the 2013-14 season.

"You can see that the team is lacking confidence and aggression in scoring goals," said the Swede.

"I will try everything possible to get Milan going again. There is a lack of faith here."

Milan coach Stefano Pioli said the team were still reeling from their 5-0 defeat by Atalanta last time out.

"The disastrous defeat in Bergamo has remained within us," said Pioli. "It is a shame not to have won. Ibra's impact was absolutely positive.

"He immediately gave support, but the team is not yet used to his presence, we could look to him more."

Atalanta continued their fine form, closing to within a point of fourth-placed Roma, who lost 2-0 to Torino on Sunday, with another 5-0 rout, this time of seventh-placed Parma.

Atalanta were already three goals up before the break thanks to Papu Gomez, Remo Freuler and Robin Gosens, with Josip Ilicic adding a second-half double.