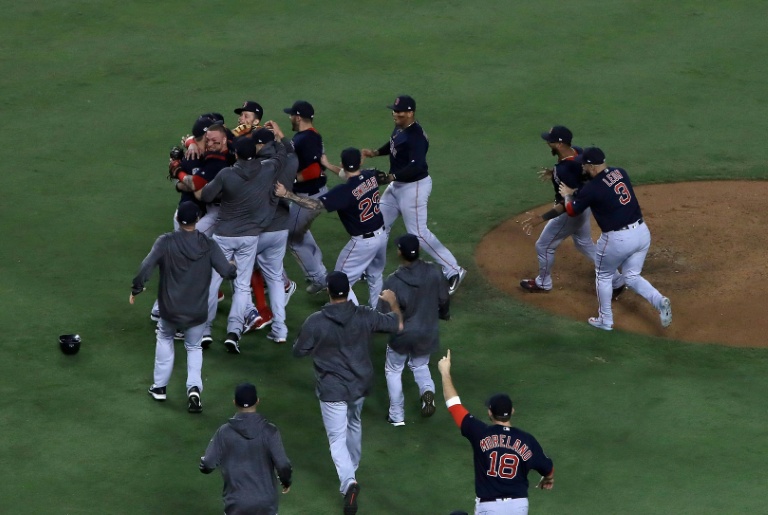 The Boston Red Sox are under investigation for illegal sign-stealing during their 2018 World Series-winning season. (Photo: AFP)

The league, which is already probing allegations of sign-stealing by the Houston Astros throughout 2017, confirmed it was now looking at allegations against the Boston Red Sox reported by The Athletic website.

The Athletic reported that Red Sox players during 2018 had used the team's video replay room to try and decode signs used by opponents.

The alleged rules breach came despite a reminder from MLB Commissioner Rob Manfred in 2017 that any electronic assistance to steal signs was illegal.

"The Commissioner made clear in a September 15, 2017, memorandum to clubs how seriously he would take any future violation of the regulations regarding use of electronic equipment or the inappropriate use of the video replay room," Major League Baseball told The Athletic.

"Given these allegations, MLB will commence an investigation into this matter."

The Red Sox were fined for sign-stealing in 2017 after it emerged a trainer had used an Apple watch to relay stolen signs to players during a game against the New York Yankees.

Following that incident Manfred said he had received "absolute assurances" from the Red Sox that they would not engage in any illegal sign-stealing in future.

The league later warned all 30 teams that future incidents of electronic sign-stealing would be subject to tougher penalties in a memo sent out before the 2018 campaign.

However, The Athletic report on Wednesday said the Red Sox persisted to skirt the rules during the 2018 regular season by sending some players into the video replay room to scrutinise the signs of opponents.

The Athletic said the practice is not believed to have taken place during the playoffs however when the MLB installed an in-person monitor in each replay room, which are normally used to help managers determine whether or not to challenge an umpire's call.

The Red Sox said Tuesday the team was cooperating with the MLB investigation.

"We were recently made aware of allegations suggesting the inappropriate use of our video replay room," the team said in a statement.

"We take these allegations seriously and will fully cooperate with MLB as they investigate the matter."

Manfred warned in November the league is ready to issue tough punishments if the allegations against the Astros are proven, describing the claims as "the most serious matter" which "relates to the integrity of the sport."