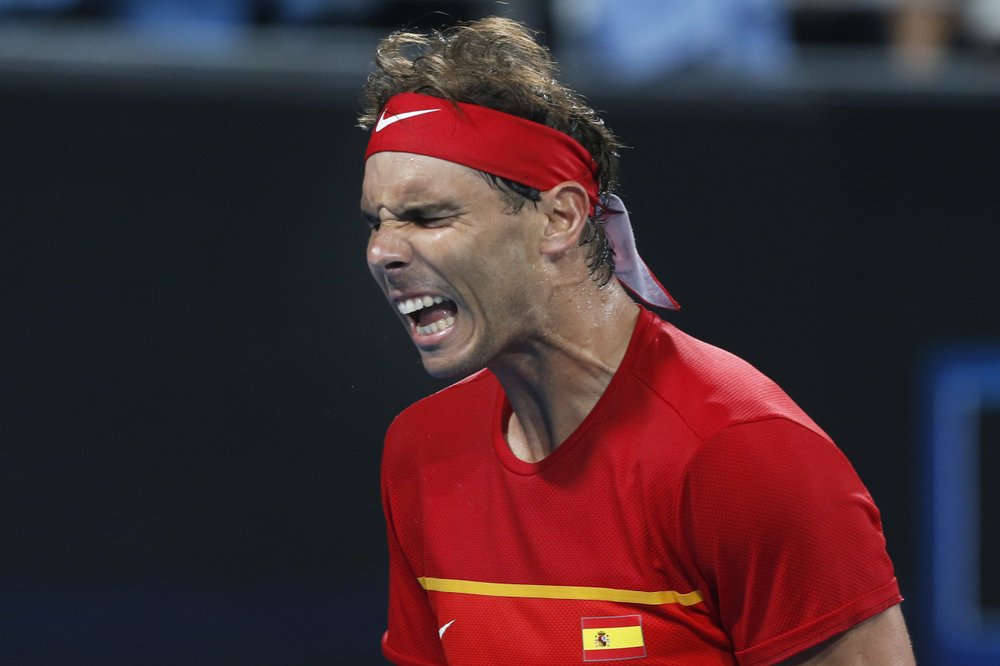 Rafael Nadal of Spain reacts to a point against Alex de Minaur of Australia during their ATP Cup tennis match in Sydney, Saturday, Jan. 11, 2020. (Photo: AP)

Rafael Nadal was coming off a really late night, and was determined to finish work before midnight on the eve of the inaugural ATP Cup final against Serbia.

After more than 20 tight games against 20-year-old Alex de Minaur’s relentless attack, Nadal converted his first service break to clinch the second set and then it was all one-way in a 4-6, 7-5, 6-1 win as he secured Spain’s semifinal win against host Australia on Saturday night.

Top-ranked Nadal and his Spanish team will face No. 2-ranked Djokovic’s Serbian team on Sunday night for the first title in the new 24-team international tournament. Djokovic beat Daniil Medvedev 6-1, 5-7, 6-4 to secure Serbia’s win over Russia in the first of the semifinals.

Nadal said it’s been a difficult few days for Spain. The Davis Cup champions played the group stage in Perth and had a transcontinental trip to Sydney for the playoffs.

He didn’t want any repeats of the quarterfinals the previous night, when he lost to David Goffin - just his second loss in a singles match since a semifinal defeat to Roger Federer at Wimbledon - and then didn’t win the deciding doubles encounter against Belgium until after 1 a.m. in a match tiebreaker.

So Nadal basically finished a quarterfinal and a semifinal on the same date. He didn’t get to bed until 5:30 a.m., and wasn’t happy about the scheduling.

“Yeah, has been a tough couple of days, especially for Team Spain ... with jet lag to make things even a little bit more difficult,” Nadal said. “But here we are. Has been important day for us. Roberto played an amazing match, and I had a great comeback.”

Nadal hadn’t lost back-to-back singles matches since 2016. De Minaur took the challenge to him, getting a service break to open and, after missing set points on Nadal’s serve in the 9th game, closing out the first set relatively quickly.

“I wasn’t surprised. He’s young. He has a lot of energy. He plays with a lot of passion,” Nadal said of de Minaur. “Änd I was a little bit lower energy than usual. That’s why he was able to take advantage. And I think when the match was going on, I was able to play better and better, to find a little bit better the rhythm and the energy back to my body.”

Nadal led Spain to the Davis Cup title at Madrid last November and is aiming to make it back-to-back triumphs in international team events.

To do that, he’ll need to end a drought on hardcourts against Djokovic that dates back to his US Open win in 2013. Djokovic leads their career meetings 28-26, but has been dominant on the surface. Nadal’s last five wins in their series have been on clay.

“This is not a singles competition. This is a team competition,” Nadal said, referring to the best-of-three match format, adding that Spain has always put the team above the individual.

It took some on-the-spot shot-making genius to get the captains and teams from both Serbia and Russia applauding earlier on Day 9, and to separate Djokovic from Medvedev in the first match of the tournament between two top-5 players.

Djokovic got the pivotal break in a long fifth game after a protracted rally ended in an exchange of volleys and drop shots. But Medvedev pushed him to the end, forcing Djokovic to produce some of his best tennis as he served for the match. The seven-time Australian Open champion saved three breaks points while serving for the match, including one with some genuine desperation — lunging to reach a volley, scrambling to get to a drop shot and then coming up with a makeshift forehand as he stretched back.

“Exciting, exhausting, joyful, dreadful all at once,” was Djokovic’s summation. “It was a lot of rallies and it was very exhausting. Very physical battle, but also mental battle ... some amazing points.

“Definitely one of the most exciting matches I’ve played against him or any of the top players in the last few years.”

Dusan Lajovic beat Karen Khachanov 7-5, 7-6 (1) in the opening singles and Serbia also won the doubles to complete a 3-0 sweep.

Despite showing signs of fatigue, Djokovic lifted his game in the third set against Medvedev to ensure he has one more singles match in Sydney. He withdrew Saturday from the Australian Open tuneup tournament in Adelaide next week.