Jimmy Butler (#22) of the Miami Heat shoots in Game 2 of the NBA Eastern Conference semifinals against the Philadelphia 76ers at FTX Arena in Miami, Florida, May 4, 2022. (Photos: CFP)

The Miami Heat beat the Philadelphia 76ers 119-103 in Game 2 of the NBA Eastern Conference semifinals at FTX Arena in Miami on Wednesday, leading 2-0 in the series.

Bam Adebayo, Jimmy Butler, Tyler Herro and Victor Oladipo took their turn to take over the Heat's offense, making sure the team led in each of the four quarters. All of them shot above 50 percent from the field. Herro, who was named the Sixth Man of the Year this season, scored 18 points and three assists, almost matching the offensive contributions of the whole bench squad of the 76ers (19 points and two assists).

Butler shouldered most of the Heat's orchestrating work with 12 assists, but when he needed to score, he's still able to get 12 points in the third quarter alone. His team also exploited well the offensive glass. Though the Heat only had eight offensive rebounds, they managed to turn them into 21 second-chance points via remarkable finishing abilities and reasonable ball movement. 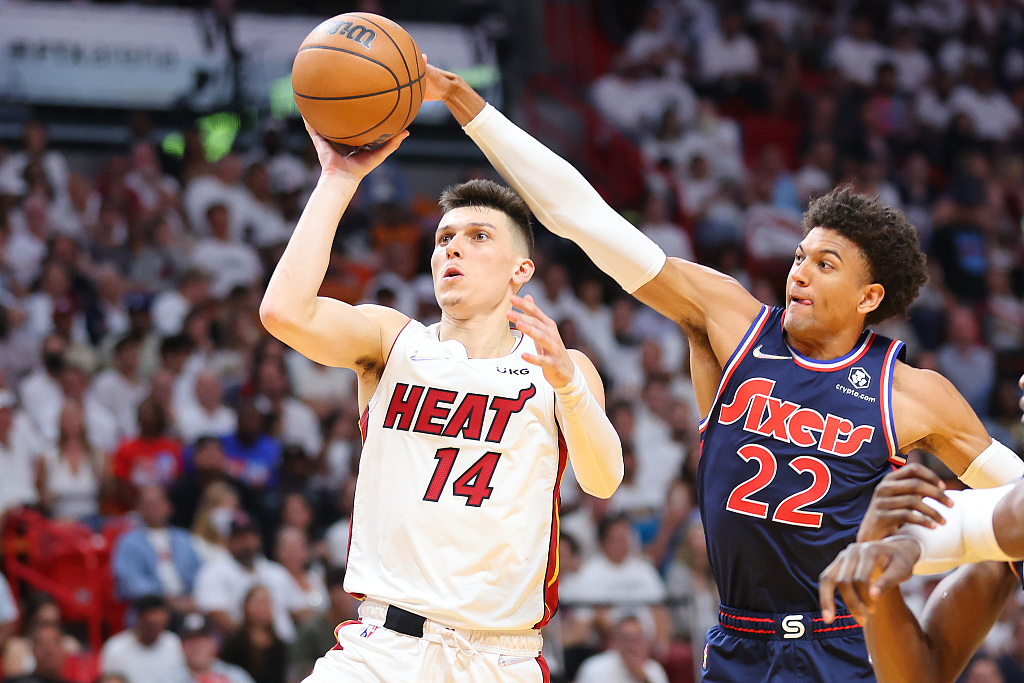 Tyler Herro (#14) of the Miami Heat shoots in Game 2 of the NBA Eastern Conference semifinals against the Philadelphia 76ers at FTX Arena in Miami, Florida, May 4, 2022.

The Heat's excellent defense on James Harden also played a key role in their victory on Wednesday night. P.J. Tucker would cover Harden when he was on the court and the Heat didn’t hesitate at all to switch if any other 76er tried to set a screen for Harden. When Tucker was resting on the bench, the Heat intended to launch 3-2 zone defense. If Harden tried to drive in, either Oladipo and Max Strus, or Gabe Vincent would join hands around the top of the key, trying to shut Harden out of the paint.

Though the Heat were very solid in implementing their well-planned defensive strategy on Harden, there were ways to break such defense. If the playmaker has explosive enough individual scoring ability or can compress the opponents' defense with penetration and pass to open teammates outside, the 76ers can maintain acceptable offensive production.

However, today's Harden is no longer able to continuously score isolation plays, though he could still charge the rim or shoot back-step 3-pointers from time to time. The rest of the 76ers shot 7-of-25 behind the arc, giving the Heat more reasons to close in to protect the paint on the defensive front. 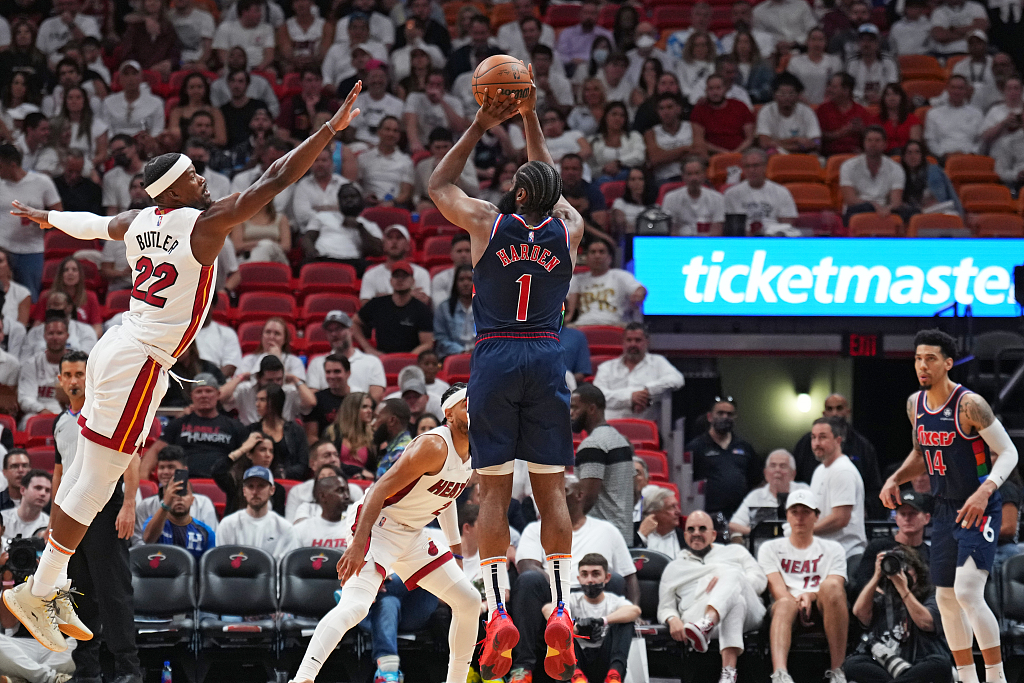 James Harden (#1) of the Philadelphia 76er shoots in Game 2 of the NBA Eastern Conference semifinals against the Miami Heat at FTX Arena in Miami, Florida, May 4, 2022.

That's why Harden tried a lot of passing from the top of the key toward teammates cutting in toward the rim. These were risky plays and required great finishing ability which the 76ers don't have anymore without Joel Embiid. Tobias Harris made some solid offensive contributions with 21 points and four assists, but he is not a productive scorer in front of the Heat's defense.

Tyrese Maxey had the best offensive performance of all 76ers with 34 points. His penetration from the weak side and work in fast breaks were both impressive, but when the rest of the team played like they did on Tuesday, the 76ers were still far away from winning.

The 76ers also had to stand the defensive liability named "DeAndre Jordan." Though coach Doc Rivers already cut Jordan's time on the court to less than 14 minutes in Game 2, the 33-year-old still did a lot of damage to the team, especially on the defensive front. When Jordan remained in the paint, the Heat could comfortably shoot open middle-range jumpers after a simple screen. Jordan tried to step out a bit in the following part of the game, but he left a huge vacuum under the hoop for the opponents to cut in and score easy layups. 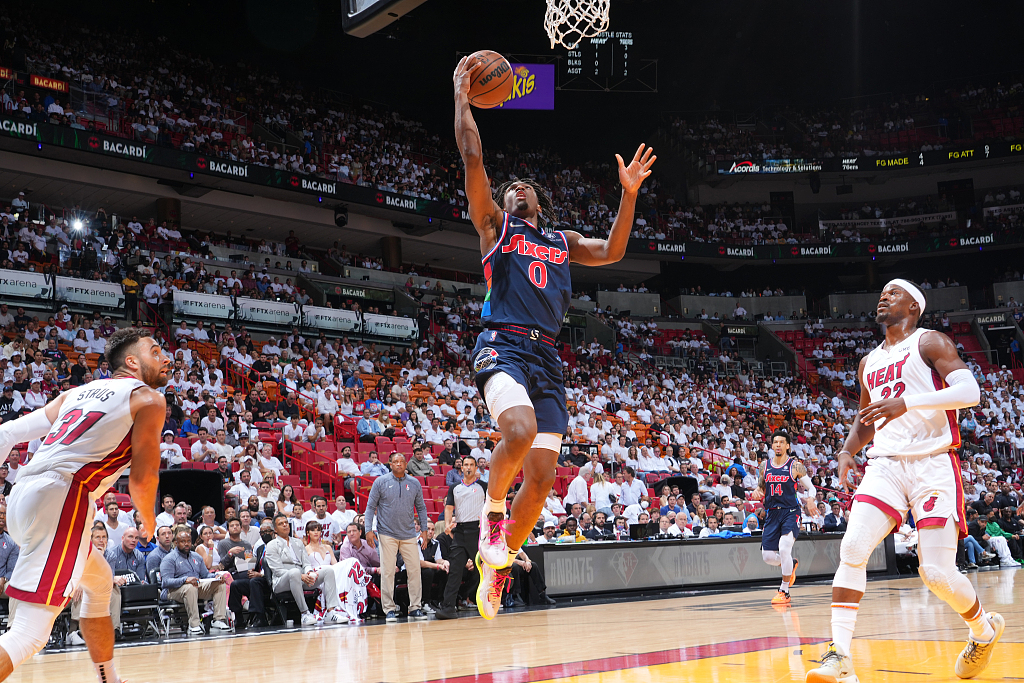 Tyrese Maxey (#0) of the Philadelphia 76ers drives toward the rim in Game 2 of the NBA Eastern Conference semifinals against the Miami Heat at FTX Arena in Miami, Florida, May 4, 2022.

In fact, the 76ers couldn't count on Jordan to protect the rim at all because he is too slow to follow anyone. Adebayo beat his defense more than once with an easy spin from the free throw line to and then scored none step to the rim.

The Heat have been doing everything correct so far in the series and secured two wins as a logical result. As for the 76ers, they need Embiid to come back as soon as possible because the rest of the team has no chance at all to make a difference against the Heat without him.

Game 3 will happen at Wells Fargo Center in Philadelphia on Friday.