The NBA Western Conference semifinals between the Memphis Grizzlies and Golden State Warriors will begin from Game 1 at FedExForum on Sunday.

The two teams have played against each other four times in the regular season and the Grizzlies won three times. However, the Warriors used different lineups in each of the games. They missed Klay Thompson in three of them and didn't have Stephen Curry in the final matchup.It's safe to say that the Grizzlies haven't met the Warriors in their strongest form yet this season. When the Warriors sent Curry, Thompson, Jordan Poole, Andrew Wiggins and Draymond Green to the floor, they were one of the most dominant franchises in the league.

However, this squad may not work so well against the Grizzlies. The Grizzlies' biggest advantages over the Warriors are offensive rebounding and aggressiveness. Jaren Jackson Jr., Brandon Clarke and Xavier Tillman are all able to cause trouble on the offensive glass with their athleticism and size. The Grizzlies earned a total of 194 free throws against the Timberwolves, which cost them 161 fouls.

The Warriors can't afford to commit that many fouls. Their victorious small-ball squad is small in size with three guards – Curry, Poole and Thompson – plus one undersized center – Green. Therefore, coach Steve Kerr will need to increase Kevon Looney's time on the court. He only averaged 13.4 minutes in the series against the Denver Nuggets.

Nonetheless, the Warriors must use the small-ball squad for the sake of offense. Neither Looney nor Green can stretch the spacing. The team will have to perform more give-and-go plays to neutralize the negative effect of the two, but give-and-go involves too much ball movement, which is vulnerable in front of the Grizzlies who led the league in steals (9.8) and forced 15.1 turnovers per game during the regular season. 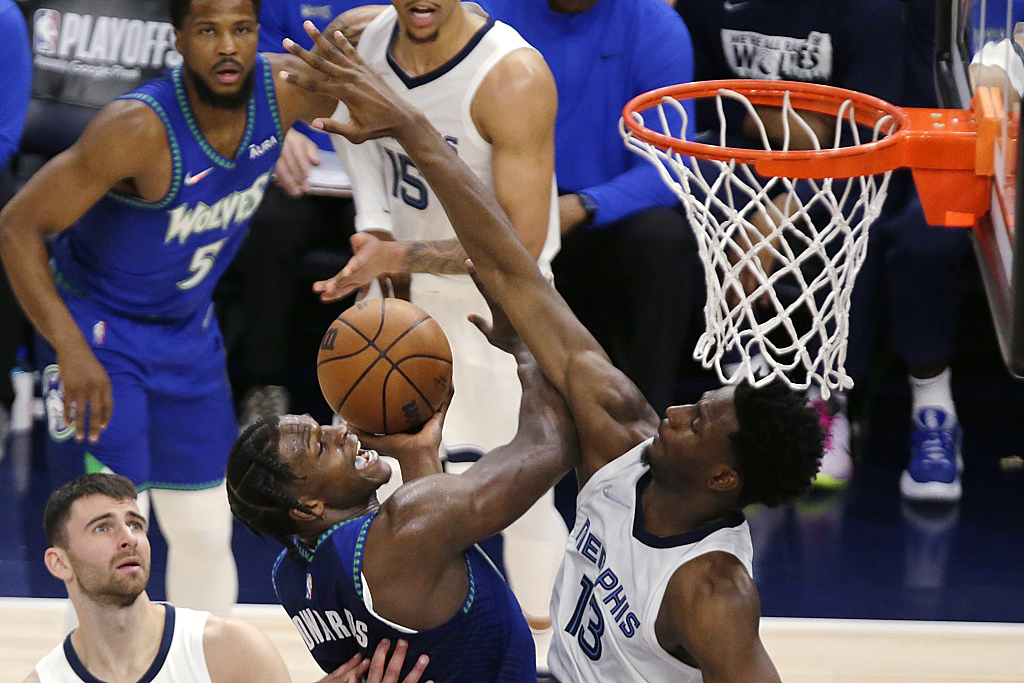 Jaren Jackson Jr. (#13) of the Memphis Grizzlies defends in Game 6 of the NBA Western Conference first-round series against the Minnesota Timberwolves at Target Center in Minneapolis, Minnesota, April 29, 2022. (Photo: CFP)

That's why Kerr must make a very detailed plan for his rotation and react to the development of the game fast and accurately. The Grizzlies are not a first-class 3-point shooting team. They can't keep too many spacing liabilities, which include Clarke and Tillman, on the court for too long. Furthermore, despite the good mobility of most of the franchise, the Grizzlies tend to leave shooters on the two wings open. Curry, Thompson and Poole must punish them in the two positions when they have the opportunities.

Ja Morant will also be a double-edged sword for the Grizzlies too. On the one hand, he will distract the attention of at least two defenders and potentially cause foul trouble for the Warriors by charging the rim. On the other, as the Timberwolves have shown in the first-round series, even Patrick Beverley can target Morant as a defensive weakness. Curry, Poole and Wiggins may not be as physical as Beverley on offense, they are smart enough to exploit Morant's defensive shortcoming, especially via the Warriors' system.

The other West semifinals between the Dallas Mavericks and Phoenix Suns will start from Game 1 at Footprint Center on May 2.

Luka Doncic only played three of the six games for the Mavericks in the first-round series against the Utah Jazz because of injury. He still averaged 29 points, 10.7 rebounds 5.7 assists. Their offensive performance in mismatch against Rudy Gobert and the remarkable 3-point shooting performance of Maxi Kleber have hit the Jazz's defense where it hurts the most. 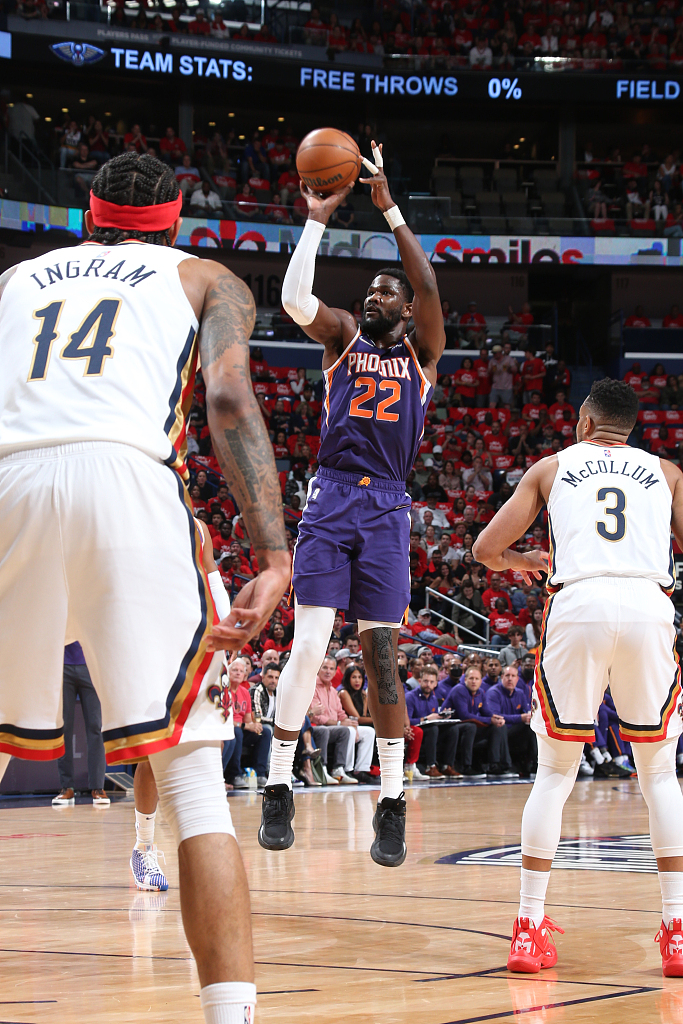 Jaren Jackson Jr. (#13) of the Memphis Grizzlies defends in Game 6 of the NBA Western Conference first-round series against the Minnesota Timberwolves at Target Center in Minneapolis, Minnesota, April 29, 2022. (Photo: CFP)

That may not be the case against the Suns because Deandre Ayton is a better switch defender than Gobert. Despite his complete offensive skills, Doncic relies more on size, power and rhythm than speed when he penetrates. Ayton is bigger and stronger than Doncic. He is also agile enough to follow Doncic and deflect his shooting.

Ayton will play a key role for the Suns on the offensive front as well. Unlike Gobert, he doesn't need to receive the ball within one meter to the hoop. Having averaged 20.5 points at 70 percent from the field in six games of the first series, Ayton will punch the Mavericks hard from inside as long as Chris Paul is there to feed him the ball.

However, neither Ayton nor Paul is the skeleton key for the Suns. Ayton is not good at reading the situation on the defensive front. When he steps out of the paint, he often doesn't know when to go back. His decision making in defending screen play is also problematic from time to time. As for Paul, the New Orleans Pelicans have shown in the first-round series that targeting him with intense efforts will exhaust the nearly 37-year-old Paul much faster.

Therefore, how much has Devin Booker recovered from the hamstring injury will matter the most to the Suns. Without an elite defender, the Mavericks built their league-top defense on a tight and smart rotation. The best way to beat such defense is with a sharp isolation performance by an explosive scorer. When Booker is healthy, he is a top 3 choice in this category in today's NBA.

Judging by the above, the Mavericks are likely to find it difficult to beat the Suns with defense. If they want to outperform the Suns offensively, Doncic will play the most important role, but others will have to do their job too, if not more. Jalen Brunson was the biggest surprise for the Mavericks in the first round and he must continue to attack like he did. Neither Booker nor Paul is 100-percent reliable in defending him.

In his fourth season in the league, Doncic has already grown into a playmaking monster who will take at least two to contain. The Suns will probably have Jae Crowder defend him first, but when Doncic drives in, at least one of the rest of the Suns must come to help and that's when the chance will come for the Mavericks. They are able to send more than one 5-out squads to the game and punish the opponents from downtown.

Dorian-Finney Smith, Kleber and Reggie Bullock combined 50 triples at the field goal rate of 43.1 percent in the first round. If they continue to shoot like this against the Suns, the Mavericks will have a chance to upset the league's leader.